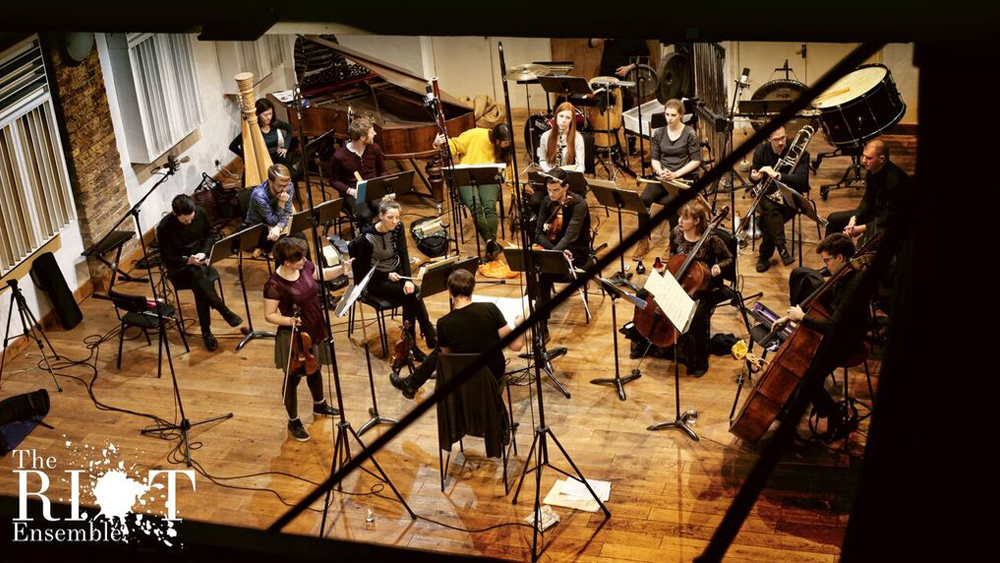 ‘I can only see cross-genre projects and cross-disciplinary work as taking things forward.’ Riot Ensemble discuss their new commission Solstices and the opportunities available in contemporary classical music.

Since forming in 2013 the progressive ensemble, with an elastic membership, have sought to grow audiences and further interest in contemporary classical music.

Riot Ensemble often take an innovative approach to their projects, performing in unusual spaces and encouraging international voices into the new-music scene in the UK.

Since their inception the ensemble have given 184 world and UK premieres from composers from over thirty countries.

They have commissioned over 20 pieces as a result of their annual call for scores, and have also run a Young Composer of the Year programme which commissioned more than a dozen teenagers to write their debut piece.

Riot Ensemble are now set to perform a new commission from composer Georg Friedrich Haas at the Royal Academy of Music on 29 January, which promises to be another exciting moment in the group’s history.

Ahead of this performance, Pétur gave us some insight into Riot the ensemble’s world….

How did your new project Solstices come about?

I remember attending the Huddersfield festival a couple of years ago where Mr. Haas was composer in residence. On the last day, Aaron Holloway-Nahum, our artistic director, decided to approach him to write a long piece for us to be performed in complete darkness. Dark Music Days (in Reykjavík) immediately came into mind as the perfect place to premiere it if he were to say yes.

After lots of planning, we confirmed the details of the project and here we are with a co-commission between Dark Music Days, Holland’s November Music, and Darmstadt in collaboration with the Royal Academy of Music here in London.

What was the experience of working with Georg Friedrich Haas like?

It has been thoroughly enjoyable. He is very generous with his time, working with us in a relaxed but focused manner, creating a beautiful atmosphere of community and shared commitment. He also has a great sense of humour so there has been lots of laughter, which is perhaps not so common when rehearsing complicated contemporary works.

Can you explain how the workshop sessions for Solstices worked?

We began by rehearsing the middle section of the piece, which is by far the longest and which constitutes the main part of the composition. There, our task is to tune our instruments to specific overtone harmonies very audibly and with great patience and pinpoint accuracy. Once we have reached the exact harmonic intonation we are then to enjoy that plateau of 'togetherness' for minutes on end until we progress on to the next chord. After that we rehearsed the opening, which is of a completely different nature: fast, frenetic and exploring extreme levels of dynamics.

Mr. Haas then introduced the more playful game elements (quite a few to memorise!) involving leading, listening and responding with spontaneity, which then lead into the apocalyptic ending section. Already at the end of the first two days of workshops we were given blindfolds and were told to play. It was a fantastic experience and really demonstrated the heightened quality of listening that darkness provides.

How important do you think smaller, grassroots venues are to the development of new composers?

For new composers I think having the freedom to experiment is most important, so if there is such an atmosphere then the venue doesn't matter. Having said that, I imagine smaller, grassroots venues offer exactly that so they are of course very important!

What’s the most unusual venue the ensemble has performed in?

I have only been with the ensemble for two and a half years, but since I’ve been a member, recording at Peter Gabriel´s Real Life Studios near Bath. The performance/recording space was tiny, like a little barn, while the control room was nothing less than an enormous spaceship straight from a science fiction movie.

Getting to and finding the venue we recently played in for the Spitalfields Festival was also quite an unusual and adventurous task – we had a wonderful evening playing in London’s only lighthouse!

How do you feel the classical music landscape has changed since Riot Ensemble’s inception in 2013?

It´s best I take an example from my home country, Iceland. While new music seems to be, at least, keeping up momentum, we are seeing performers of traditional repertoire enjoying more success than ever. For instance, we now have a young pianist —Víkingur Heiðar Ólafsson — who seems to be heading fast towards international stardom. Here, he fills very our very large hall (at Harpa) to the limit repeatedly in between touring the world´s main venues to much critical acclaim. And what is he playing? Bach. But he also likes playing contemporary music, which demonstrates that audiences and performers alike are more willing to explore the music of the present in dialogue with the music of the past.

You’ve brought many international voices to the UK since your inception, do you worry what impact Brexit will have on projects like these?

I hope of course that it will have a minimal impact, but of course it will inevitably. I do, however, not have enough detailed knowledge of the subject to expand further.

You recently performed with Arcade Fire’s Richard Reed Parry, do you think increased fluidity between popular and classical music would be advantageous?

Here, there is another ‘yes’ answer, but in a much more positive context. I can only see cross-genre projects and cross-disciplinary work as taking things forward. It is however important for these projects to be worked through very well so as to avoid banalities and devaluation of musical content. In the case of Parry it was definitely a huge success.

What would your advice be to new composers?

Don´t be afraid to follow your instincts, stand by your compositions but be humble. Seek to constantly learn.

Beyond Solstices, what other projects do you have planned for 2019?

There is a UK premiere of Solstices in London of course and then there is a performance at November Music; Performances in Zagreb, Touring with Kit Downes in London and Birmingham, video recordings of Berio´s Sequenzas in summer and a strong presence at Huddersfield with some, as yet, unannounced and very exciting commissions (stay tuned!).

Many, many more things are planned for this year, but for me these come first into mind. The ensemble´s activity is constantly increasing and it is a privilege to be part of it.

For more information about Riot Ensemble and to purchase tickets to Solstices, please click here
Features