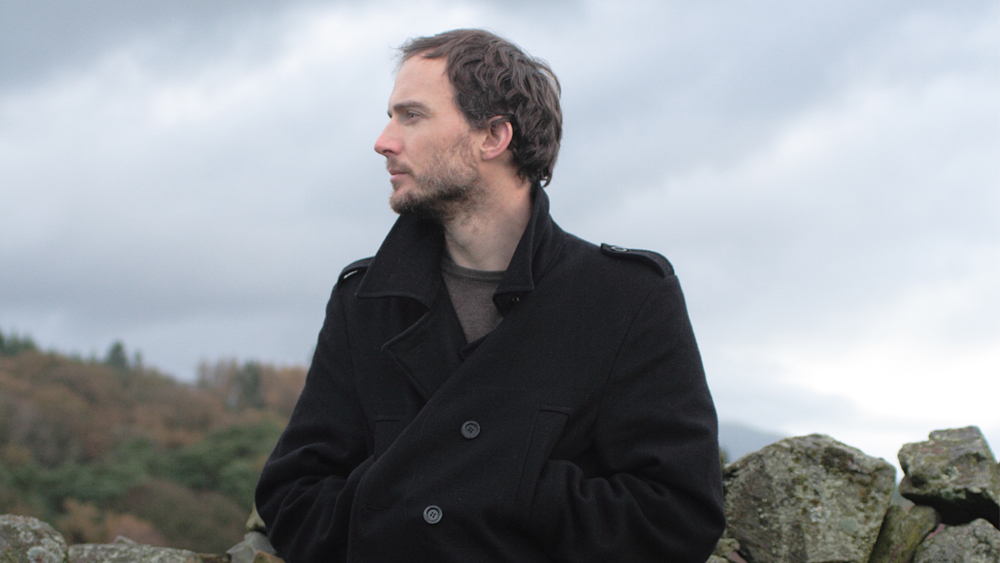 Environment has always loomed large over Richard’s work, and his latest album Border Ballads is no exception.

Recorded while he was living on the rural edge of the Scotland-England border the tracks on the album draw largely from those surroundings, which acts as a primary stimulus.

Nevertheless, unlike much of his musical output, he has produced an album of 12 concise tracks offering a counterbalance to the longform nature of much of his work.

Despite their shorter form, the compositions that make up Border Ballads retain an acutely evocative, and often melancholic, sensibility in line with his more epic pieces.

A prolific creator, Richard also writes and runs Corbel Stone Press with his wife Autumn Richardson through which they publish music, art and writing informed by landscape and nature.

Here we chat to the composer about his relationship to his surroundings, what drives his prolific output and the trials and tribulations of self-publishing…

What was the thinking behind Border Ballads?
It’s a tipping of the hat to a corpus of folk songs called the ‘border ballads’, made famous perhaps by Sir Walter Scott’s book, Minstrelsy of the Scottish Border, and later Francis Child’s English and Scottish Popular Ballads. My wife, Autumn, and I moved to the Borders in 2017, and this collection of recordings have gradually accumulated since then.

In contrast to a lot of your other work the album’s tracks are relatively brief. What motivated you to write shorter compositions for this record?
Yes, for example my previous album, Towards A Frontier (2017), was a single, hour-long composition. It was the result of a five-year project that I was involved with in Iceland, looking at climate change in remote locations. It was such an overwhelming subject to approach artistically, and so the work evolved into something equally monolithic. Perhaps Border Ballads represents a pendulum shift towards something smaller, simpler, and more intimate.

How has living on the northern edge of the Scotland-England border informed your work?
All of my work, in some way or another, is informed by the place in which it was recorded. The outside just seeps in. This area of the Borders – Liddesdale – is entirely new to me, and it has undoubtedly infused Border Ballads. Below us on the map, and across a small stream, is Cumbria. Not far to the east, in Kielder Forest, is the Northumberland border. A short drive west takes us into Dumfries and Galloway. Perhaps unsurprisingly, there is a real mix of accents here: Scottish, Cumbrian and Northumbrian.

So it feels both topographically bounded, almost islanded – and therefore well-defined – and also peculiarly not really there. A kind of in-between place. And aside from the contemporary geography and people, there is a history of conflict; of reivers, and of bloody goings on at the nearby Hermitage Castle. All these things have undoubtedly made their presence felt in the music.

What draws you to focus on the natural world over more human-focused concerns, as a lot of music does?
There’s a to-and-fro between landscape and instrumental music; a shared resonance. For me, they readily conjure one another. Of course, landscapes are already full of sound, but there is something else, something inaudible; a hidden melody. I often liken it to an underground stream, and I take it upon myself to try to bring it to the surface, or find those places where it might spontaneously rupture forth. You could say it is music as a form of auditory dowsing.

Nevertheless, the resulting sounds that I produce are only ever a dim echo; like the translation from one language to another, something is inevitably lost. And loss, of a different, and very real tangible sort, is increasingly becoming my pre-occupation. Species loss. Climate change. These things weigh heavily; so heavily that at times making art seems like a futile, self-indulgent activity.

How do your tracks start life?
It’s interesting that you use the phrase ‘start life’, because music is very much alive and belongs to itself. We might pluck or bow the strings but the resulting vibrations and oscillations move beyond us; they resonate long after the instance of their making. I’m therefore particularly interested in unrepeatable sounds. I might record an improvisation in a certain key and then listen back for a note or phrase that I couldn’t have foreseen, much less replay. It might simply be a subtle intonation or overtone. This will then become the foundation for a composition.

As well as making music you also write, do the two influence each other?
I think they’re fairly discrete entities, but there are some interesting convergences and overlaps. They certainly emanate from the same place, and I have been known to release an album and a book that complement each other; shedding different light on the same subject. Sometimes there’s a more direct connection. The recording A Great Body Rising and Falling (2019) was written for my novella The Look Away. In composing the music I was trying to come close to the feeling evoked by the writing. Ominous and claustrophobic. In turn the book Dark Hollow Dark attempts to emulate the delirious effects of musical repetition – the kind of trance that it can evoke.

How do you think your sound has evolved since you first started making music?
It’s possibly become darker and more expansive. I’m increasingly interested in low frequencies, possibly because I was finally able to acquire a cello a few years ago. Notwithstanding the shortness of the pieces on Border Ballads, there’s a sense that each track is a fragment of a larger whole with the same overall timbre and tonality. In many ways the compositional process is quite similar to, say, Marking Time (2008) from a decade ago, but, if you listen to the two albums together, Border Ballads has a disturbing low undertow, which surfaces and takes centre ground on Dhu, at the centre of the album, before submerging again.

Your output is prolific, what drives you to keep composing?
I think it has something to do with that ‘loss’ which I earlier identified as resulting from the process of translating the inaudible into the audible. There is the constant drive to get closer, to expose more of what is beneath, to lose less. And because, of course, such a desire can never be fully realised, it effectively becomes a compulsion.

What effect has the fact that you publish your own work had on your music?
By necessity it’s been a solo operation – everything has been written, recorded and mastered by myself. I’ve therefore learnt largely as I’ve gone along, both in terms of musicianship and production techniques. You could say I’m an advocate of taking what might appear to be limitations and turning them into strengths. Undoubtedly, the process of self-publishing gives the artist more control over the work itself, both in terms of its sound, but also when and how the music is made available. Before Bandcamp – when internet speeds were slow, c. 2005 to 2011 – I self-released work as CDRs. I went through a phase of making each copy to order, with unique artwork and a printed dedication to the recipient. It was quite labour intensive, and therefore ultimately unsustainable, but I hope it had the effect of creating an intimate, meaningful experience for the listener.

What are the challenges and rewards of self-publishing?
The main challenge is always publicity. I was very fortunate in my early career to have some champions who wrote about, broadcast, or helped publicise my work. You might think it gets easier after 15 years, but the truth is – especially with underground music – that journalists, editors, DJs, and promoters often come and go, so it’s difficult to forge lasting relationships. I’ve made a few, and I’m grateful for them. And so the reward comes through the people you meet along the way, whether it’s a writer, DJ, artist or musician – all are fellow travellers. Needless to say, in producing and disseminating the work myself, the most moving encounters are the responses that listeners send – via social media, email, or letter. The gifts, the friendship, the encouragement. These are the things that sustain us when times are hard.

What does the rest of the year hold?
I’m hard at work on a new album, book and special edition about the effects of the last ice age on northern Britain. It’s something of a belated follow-up to Limnology (2012), which comprised words and music that explore riverine processes. The new work will focus on the incredibly slow, destructive power of ice; on the capacity of glaciers to scour landscapes and thereby carve out valleys, leaving moraines, drumlins and eskers in their wake. It will therefore necessarily be a return to longform composition, after the interlude of Border Ballads.

Before (and after) it is released, a series of cassettes is planned – the first of them, Till Fabrics has just been released, and is an ‘auditory deconstruction of morainic landscapes that imitate the effects of attrition and ice weathering over millennia, as evidenced in low-end synth debris suspended in a shimmering matrix of violin and cello regolith.’ I like the idea of releasing this material on tape as the medium itself is prone to decay and wear – so it ideally fits the subject matter.

Border Ballads is out now via Corbel Stone Press.