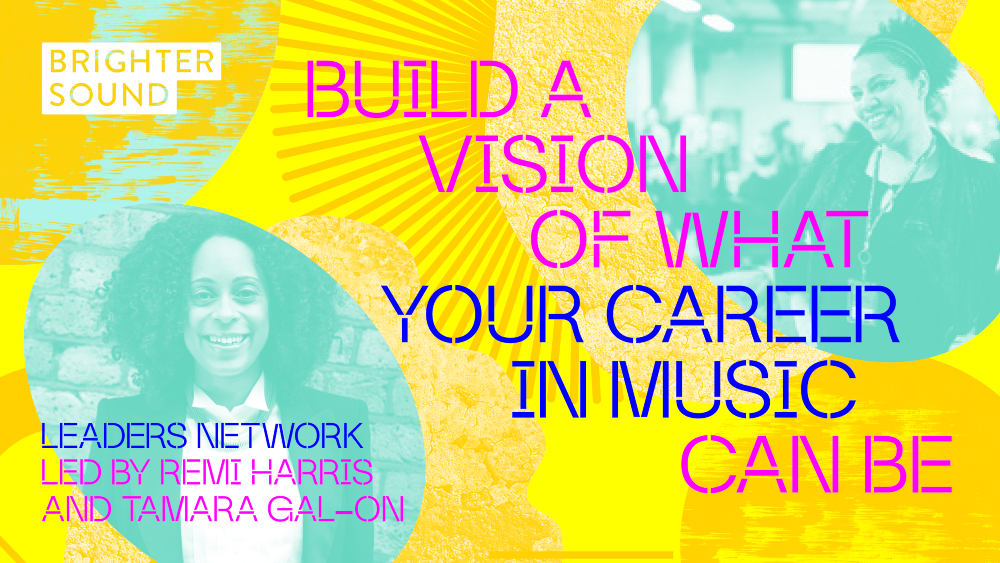 ‘There’s definitely an aspect of self-belief that you can get from being part of a network like that, but there’s also the aspect of seeing how having people in your corner that can help you strategise and see a different way through a problem that you might not have seen.’

Today, M Magazine shines a light on the new Brighter Sound initiative, the Leaders Network. Brighter Sound, a creative music charity based in the North of England, develops the music creators, leaders and industry professionals of the future, homing in on those who are underrepresented in the industry and providing with them with the assistance to support fruitful artistic and career development.

The Leaders Network is a free programme that will develop twelve female leaders in the music industry, working in the North (the North-East, North-West and Yorkshire regions), through a series of monthly online group and one-to-one coaching sessions. These sessions will cover areas such as: individual leadership development plans, learning about effective leadership styles, how to build a supportive network with other people across the industry, developing confidence and ambition, amongst other key threads.

Alongside the network, and with the support of a £450,000 grant from Arts Council England, Brighter Sound are setting up a female-led, Northern based record label, offering business start-up training and work placements. There will also be regular masterclasses offered to participants from female leaders in various areas of the music industry. More information about the wider programme, as well as the Leaders Network, can be found on the Brighter Sound website.

‘It’s going to be much more about people finding or identifying their strengths as a leader, developing and enhancing them, making them more confident in those abilities.’

We spoke with Remi Harris MBE, who will be running the Leaders Network alongside creative industries coach Tamara Gal-On, about the scheme and how to apply. With over twenty years of experience in the music industry, Remi Harris’ guidance will prove invaluable to the twelve successful applicants invited onto the programme. Tamara Gal-On has worked with women in the industry since 2007, helping to redress the disproportionate imbalance which, unfortunately, remains present today. As Remi Harris states, ‘I’ve got a wide range of experience and, blended together with everything that Tamara’s been doing, it will hopefully be a really beneficial range of skills and experience.’

In 2007, whilst working at the Association of Independent Music (AIM), Remi Harris herself was part of a similar leadership programme which had a sizeable impact on the trajectory of her career. This experience further exemplifies how suited she is to be running the Leaders Network: ‘I’d just finished a masters in business and this programme was announced as a scheme for mid-career leaders, and you had to be nominated to get on to it. I was nominated and I said, 'Yes, I’d love to do it.'’ The group agreed that their aim was for ‘each of us to step into the spotlight to be more visible in terms of our work and what we were doing.’

The two programmes that Remi Harris worked on were a diversity initiative within the music industry and one to improve digital skills, a scheme called London Connected, which was run by AIM. For Remi Harris, the impact of the programme was huge, as she explains, ‘Both of these things I was able to do as a result of going on the programme, and both of these things massively boosted my own power to make things happen within the industry.’ Following the success of the schemes, Remi Harris was named the general manager of AIM and has made life-long connections with the other people on the leadership programme: ‘It was just amazing to be in that group of people. One of them is now working as a VP at Apple, two of them have become filmmakers, there’s a producer, a visual artist and one of them has become a television presenter and is quite well known.’

As with the programme that Remi Harris undertook, the Leaders Network is not simply about changing attitudes towards leadership. As the title of the programme suggests, the connections participants will form through it are very important: ‘There’s definitely an aspect of self-belief that you can get from being part of a network like that, but there’s also the aspect of seeing how having people in your corner that can help you strategise and see a different way through a problem that you might not have seen.’ Remi Harris continues, ‘It’s about knowing how to make a vision into a reality and having lots of different experiences to draw on and advisers to draw from.’

‘We didn’t want that word [leader] to come and drop images of a traditional CEO or a man in a suite, or a woman in a suit. We wanted to keep it very flexible to try and identify people that are the kind of people you always have in groups that make things happen.'

The focus of the Leaders Network will be on encouraging the participants to excel in their chosen fields through their own strengths: ‘It’s going to be much more about people finding or identifying their strengths as a leader, developing and enhancing them, making them more confident in those abilities.’ This, alongside the one-to-one coaching, will see a true focus on the individual and how they can break through in an industry largely dominated by males based in London.

We asked Remi Harris why some people may not consider themselves a ‘leader’, despite the fact that they demonstrate attributes which may see them be defined as such by others. Remi Harris explains, ‘We did some research about this before we launched the programme and we talked to women in and from the North who we felt were leaders about that word.’ She continues, ‘Some felt very comfortable with that label and declaring themselves as a leader, and other people felt like they were just getting on with it, doing an effective job of running these different groups and being involved in lots of community work. They maybe felt like they weren’t sure that they had the status of a leader.’

Does the word ‘leader’ evoke images of males in charge? ‘We didn’t want that word to come and drop images of a traditional CEO or a man in a suite, or a woman in a suit. We wanted to keep it very flexible to try and identify people that are the kind of people you always have in groups that make things happen. You know, the band member that always is the one that really pushes things forward, or the person who’s set up their own organisation, and maybe they’re fairly small-scale, but they are actually the one that’s really providing that energy to make things happen or make a difference in their area of the music industry.’

In terms of the specifics of the programme, the deadline for applications is the 30 October. Those wishing to apply should complete the online application form. Brighter Sound are looking for women based in the North of England with a minimum of five years’ experience in the music industry, displaying a passion for their own personal and career development. We asked Remi Harris what makes for a good application: ‘We want to find out about their interests and their beliefs, what they’ve done and what they are doing, how they think they can contribute to a network of women in music across the North.’

‘People who generate energy, create things and make things happen. I think we all know those people, the ones that you approach to get things done.'

Due to the continuing coronavirus restrictions, the Leaders Network will take place online. We asked Remi Harris how this has impacted plans for the initiative: ‘We had originally planned for this to be face-to-face and that we would all get together in person, either in Manchester, Newcastle or Leeds. Then that, obviously, all had to be sent back to the drawing board in February and looked at again.’ Now that the network will be based online, it serves to increase the accessibility of the programme, taking place in the middle of the day and just before school pick up time: ‘I really like the idea that we are minimising the amount of time commitment that it takes for people to have access to this training. We’re minimising the travel time and cost for people from all sorts of different backgrounds, perhaps living in rural areas.’ As Remi Harris outlines, historically these kinds of schemes have predominately been on offer only in the capital: ‘To access that high-level knowledge, in the past, if you weren’t in London, you would have needed to get on the train, you would have needed to spend half a day to come to a seminar. The fact that our programme is so accessible can only be beneficial.’

In addition to making your own application, you can nominate someone who you feel is suitable for this programme. If potential applicants require any further information regarding their suitability for the course, they can contact Brighter Sound’s Laura McGregor at laura@brightersound.com. Applications are open for cis and trans women, as well as non-binary people who are comfortable in a space that centres on the experiences of women.

For Remi Harris, the people who will benefit most from the Leader’s Network are the change makers of tomorrow: ‘People who generate energy, create things and make things happen. I think we all know those people, the ones that you approach to get things done. We’re appealing to them because they are the people we think we can really make a difference to with this programme.’