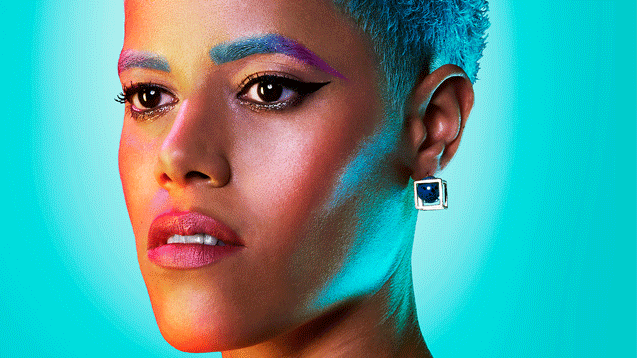 Meet Rebekah Ubuntu, a London-based performance and sound artist who mines the tensions between class, queerness and rebellion for their work...

Rebekah Ubuntu is a London-based performance and sound artist who mines the tensions between class, queerness and rebellion for their work.

They relish the unknown and previously unchartered, using technology and performance to convey new ways of thinking and creating.

The British Institute of Modern Music (BIMM) acolyte and Limewharf Artist in Residence has already been featured on BBC Radio 1’s Annie Mac Show and at London’s Serpentine Gallery, with a slot at The Barbican’s Transpose: The Future festival in the bag for December.

Ahead of Rebekah’s performance at Bishi's WITCiH: The State of Gender? festival tomorrow (Friday), we get the skinny from an artist working at the cutting edge of 21st culture…

Definitely Michael Jackson's Leave Me Alone on a glitchy VHS boxset. I was four years old. I played it so many times my mum’s VCR literally burst into flames. The dog in the suit and those giant snapping teeth still haunt my dreams!

My sixth-form friends’ all-female black punk band at the Amersham Arms in New Cross. We’d all just started college and by the end of the first week there were a bunch of new bands with constantly changing names! They took over the Amersham Arms and all us punk kids came out in support. It was my first ever mosh pit. I jumped in with both feet, flailing around with total abandon. We compared bruises on the train home, never wanting them to fade. It was a massive purge for my pent-up teenage angst.

Doing lip trills and vocal warm-ups on the tube. Judging from folks’ reactions, it doesn’t appear to be ‘socially acceptable’. It’s tough out here.

A performance teacher once told me that I’m most powerful when I manage to embrace my fear. This really helps me get in the zone when I’m creating a song and equally when I’m about to go on stage to perform it for the first time.

Discwoman’s roster, NTS Radio and Boiler Room’s live streams are gold. I’m in love with WARP, NON Worldwide and Young Turks. Underground festival line-ups like Rewire, and blogs and online magazines like Resident Advisor and Fader are great too – that’s how I found out about Bonaventure.

Last year I performed at Yo Sissy! at Berlin's Festsaal Kreuzberg. Pansy, Scout and the tech crew got the acoustics perfect and the sound was so lit.

Janelle Monae!!! She ticks all my boxes. I’ve got Django Jane on repeat.

Absolutely my track Are You There? Think Kelela meets Arca. I’m in love with it.

What do you have in store for your performance at WITCiH Festival?

I’m premiering Are You There? with some brand new visuals. Super excited!

I’m performing at Transpose: The Future at the Barbican in December but right now I’m just looking forward to all three days of the WITCiH Festival. The line-up is pure fire. It’s an honour to share the stage with Bishi and the sheer talent on each of the three nights.

Rebekah Ubuntu performs at WITCiH: The State of Gender? Festival on Friday 28 September at The Barge House, London.