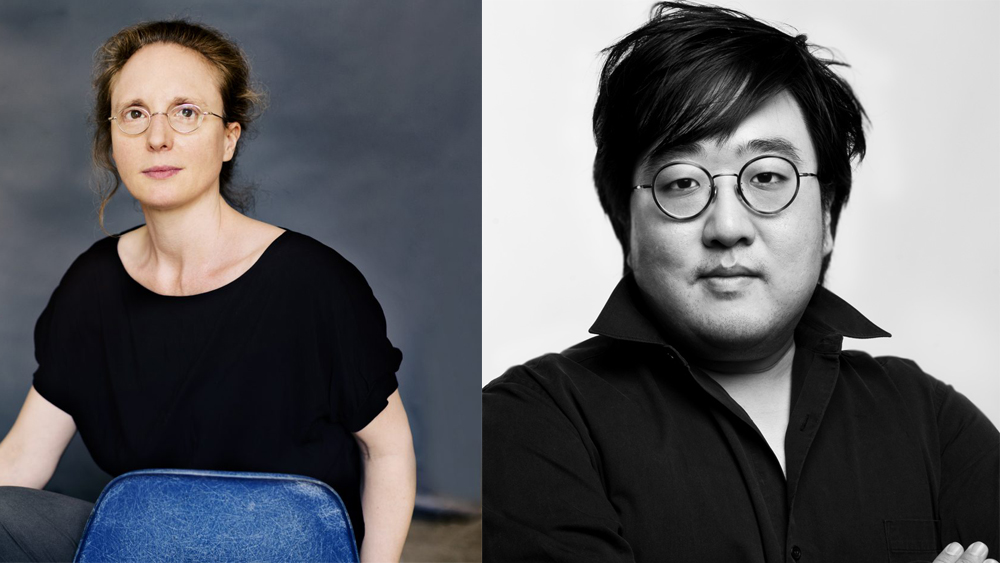 Earlier this year the Berlin-based British composer was announced as the first female recipient of the Ernst von Siemens Music Prize, and on 21 March her music will be celebrated with a special concert by the Birmingham Contemporary Music Group (BCMG).

Rebecca is currently writing a new work co-commissioned by BCMG which they will premiere later this year.

So far the ensemble has commissioned over 175 pieces of music and the BCMG also supports emerging talent through its Apprentice Composer-in-Residence scheme.

One beneficiary of the scheme is young London-based Korean composer Donghoon Shin, who will also feature in the concert when his new work for the ancient Chinese instrument the Sheng is given its world premiere.

Rebecca and Donghoon will also appear ‘in coversation’ together prior to the concert, but ahead of the event the composers chat to M about their creative processes, musical influences and much more…

Your music will be performed by the Birmingham Contemporary Music Group (BCMG) on 21 March, as part of a programme which explores music dissolving borders and how that might broaden our understanding of the world. How do you think your music explores this theme?

Rebecca Saunders (RS): Music dissolves borders, or rather it ignores them, moves us beyond them, takes us to the core of what it is to be human. Perhaps murmurs explores this theme: it is a spatialised piece performed without conductor, where each musician has a separate very quiet and intimate solo. This is a collage where I can juxtapose seemingly alien musics, forcing them to coexist in a shared acoustic landscape — each solo maintains its individuality, but is also framed and reinforced through the presence of the other players.

Donghoon Shin (DS): My sheng concerto Anecdote, commissioned by the BCMG, is my first attempt to write a piece for an Asian traditional instrument. For a long time, I was reluctant to use Asian traditional instruments in my music because I didn’t want to be confined and defined as an Asian composer. This piece Anecdote is for me, a brave step to dissolve the border in my mind which has limited my writer’s freedom.

How do you go about writing for a particular instrument and immersing yourself in its soundworld?

RS: It is not only inspirational to experiment and explore sounds with performers, but fascinating to observe the intimate play between the musician and their instrument — this extraordinary physical relationship, this drama, it´s a wonderful dynamic. I also need to explore the technical limits of an instrument, to know its acoustic properties, and I experiment with specific sounds which fascinate me and which then often provide the basis of a new work.

DS: The mechanism of the sheng is very complicated, and fingerings are not very logical. Generously, Wu Wei (who is performing the world premiere of my sheng concerto on 21 March) has lent me one of his shengs, so to understand the instrument, I had to spend enough time with the instrument. The most interesting thing I discovered whilst I was writing the piece was the great timbral potential which the instrument has. The sheng has a very particular timbre, but it combines very well with every western instrument, such as the horn, clarinet and also the harmonics sounds of strings. One of my goals while working on the piece was to drag out the timbral potential of the instrument and combine it well with the western instruments so that the whole ensemble sounds almost like a huge sheng.

How has literature inspired your work?

RS: There are a number of authors whose works fascinate me, sometimes for years at a time. It isn´t that I seek to set their works, rather that their writing articulates ideas which interest me, providing a kind of parallel to my composing research and processes. At present the works of David Foster Wallace blow my mind. Also the language of Beckett inspires me again and again — this skeletal fragility, intimate and mind-bogglingly reduced, coupled with an almost terrifying directness and openness. I find it very powerful.

DS: When I was a teenager, I always dreamt of being a writer. I was fascinated by many writers but the most important influence for me was Jorge Luis Borges and his short stories. For some reason, I was completely entranced by his writing — especially those pieces which demonstrate the idea of intertextuality. Ever since, Borges has been a 'librarian' figure for me (he did consider himself a librarian) of the world of text, introducing many eminent writers and their masterpieces to me, from Homer through Cervantes and Stevenson to Bioy Casares. Through Borges‘ short stories, I’ve learnt how to mix and juxtapose disparate things to create a new meaning. Of course, my Anecdote concerto is not directly inspired by his writing, but still I believe that I used the strategies which he taught me in my music.

RS: I first came to Germany in the early nineties and this was an extraordinary time for me. Studying and living abroad can be wonderfully liberating for any artist — to get outside of one’s culture, to see everything from a new perspective, to reassess and question one´s thinking and creativity. These formative years were very important — the sense of freedom, I just soaked it up.

DS: I moved to London in 2015 and I am currently studying for a PhD under the supervision of composer George Benjamin at King’s College London. Of course, being taught technically and aesthetically by the great composer was a crucial turning point for me. Furthermore, while living in the city of diversities, my artistic perspective has changed, and I’ve been open-minded.

Rebecca, you have recently been announced as the 2019 Ernst von Siemens Music Prize award winner and Donghoon, in 2016 you were awarded the Royal Philharmonic Society Composition prize. How does this sort of recognition impact on your career?

RS: Composing is often such a slow and complex process involving long stretches of time working alone. Such an award is invaluable and enables me to concentrate purely on composing. When I was young scholarships and prizes gave me some stability and the freedom to do what I had to; this is so important if you want to encourage a fertile, adventurous, and vibrant arts scene.

DS: To write music, a composer should isolate him/herself and spend a very long time on his/her desk. It is a very tiring and lonely process. Sometimes, prizes can be encouragements, but as a young composer who has just begun my career, I always try not to read too much into prizes.

What advice would you give to anyone considering a career as a composer?

RS: Being a composer is something you have to want to do with an uncompromising passion and sense of necessity — to think, ask questions and seek solutions, absorb and listen, and create. In this respect it isn´t really a career choice. There is no reason to be a composer, other than you simply are one — it´s pretty much all or nothing. I would encourage young composers to be as stubborn, self-willed, and different as they need to be to seek out and follow their own voice.

DS: The freedom and the courage to be free.

What have you enjoyed about working with BCMG?

RS: BCMG have co-commissioned a new work which I am finishing right now, and they will perform the UK premiere in November. This is a relatively new collaboration, and it means a lot to me to be working in the UK with this fantastic ensemble.

DS: Over the past two years as BCMG’s Apprentice Composer-in-Residence I have been privileged to work with one of the most important new music ensembles in the music scene. Of course, I’ve learnt many things from them, especially at the workshop which I had with the ensemble and Wu Wei a month ago was crucial for my writing and gave me much food for thought.

RS: Discovering the music of Galina Ustvolskaya made a profound impression on me because of its extraordinary directness and courage — her ability to reduce music to its essence is incredible. And, Morton Feldman´s music introduced me to another sense of time and musical space.

DS: Unsuk Chin has been an important mentor for me over ten years and she introduced me to many masters and their music when I was studying in the relatively isolated Korean new music scene.

What do you make of the general health of new music here in the UK?

RS: There is a massive wealth of creative energy in the UK. There are established organisations, like the extraordinary internationally renowned Huddersfield Contemporary Music Festival, but also many young ensembles and performers, small ground-breaking festivals, weird and wonderful young composers, and an improvising scene which is famous around the world. But there are serious financial concerns for many involved and that is pretty terrifying. The arts desperately need unconditional financial support — it´s critical for any healthy functioning society.

DS: London’s new music scene is very healthy and full of energy. The most important thing is many orchestras and ensembles always try to find new faces and give them opportunities to write pieces for them.

Beyond the upcoming BCMG concert on 21 March, what do you have planned for the rest of the year?

RS: I´ll soon begin work on an experimental spatialised installation for numerous trumpets and 2500 music boxes in a museum in Cologne. The next large-scale work is a piano concerto, a Roche Prize Commission, for Nic Hodges at the Lucerne Festival, and I am collaborating with the soprano Juliet Fraser again, this time exploring electronics for the first time. Indeed we begin our second studio session together at the weekend, which is very exciting.

For more information about the concert featuring Rebecca and Donghoon and to book tickets, please visit bcmg.org.uk
Features