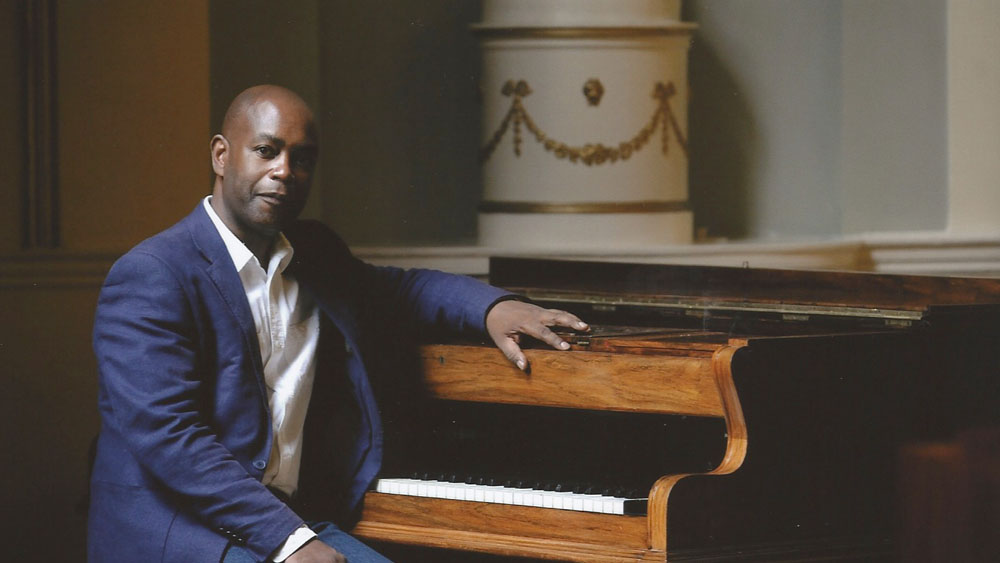 ‘Music is becoming a cultural preserve that is gradually only becoming accessible to those who are from wealthy backgrounds. This is a huge concern for future generations’: composer Philip Herbert talks about the future of classical music.

‘Music is becoming a cultural preserve that is gradually only becoming accessible to those who are from wealthy backgrounds. This is a huge concern for future generations’: says composer Philip Herbert.

While Philip’s own musical upbringing was a rich one, he recognises the opportunities for young musicians and composers is increasingly lacking.

For his own part Philip has supported emerging talent through coordinating master classes, workshops and concert series, as well as devising courses and community projects for young people and adults.

Meanwhile his own work has been broadcast on BBC Radio 2, 3 and 4 as well as BBC TV.

Most recently, Philip was invited to go to New York, Carnegie Hall by the president and artistic director of The Sphinx Organisation, Afa Dworkin, to hear some of his music being performed by the Sphinx Virtuosi.

The Sphinx Virtuosi performed Philip’s Elegy: In Memoriam, which looks to the story of 18-year-old Stephen Lawrence, whose was murdered in a racially motivated attack in 1993.

Here, we chat to the composer about his start in music, the thinking behind his Elegy and what he hopes for the future of classical music…

My first interest in music was inspired by a combination of music heard at home, at school, concerts and live music that I heard when at the age of five and beyond. My parents had a record collection that was very eclectic in musical styles. For example, there was Psalms being orated by the late Theodore Bikel with orchestral accompaniment providing a creative interaction between spoken word and an orchestra. There was gospel music, classical music and some pop music of the time. My parents went to concerts, taking us as a family with other family friends, to hear Handel’s Messiah.

My mother sang in a choir and I was taken to rehearsals. I found it fascinating to hear groups of singers – learning choral music and singing in harmony. At primary school there were assemblies where singing was expected and at times, I was asked to sing solo. I remember being fascinated by the way a teacher by the name of Mrs. Crowe played the piano.

We were taken to hear lunchtime concerts every week, at Leeds Art Gallery, by a teacher by the name of Miss Jones. Sometimes a very select group of us, were taken backstage to meet the artist who had been performing, where we were encouraged to ask the artist any questions we could think of and have our programme signed with the artist’s autograph.

After assembling a baby buggy in the house and pretending to play the piano, I was presented with a toy piano for Christmas. Later my father bought a piano and found me a piano teacher in the neighbourhood. He also taught me how to read music from a Teach Yourself to Read Music book. My mother supervised my piano practice, as I lacked focus to begin with.

At high school, there was a strong music department, with plenty of opportunities to perform in musicals, opera, ensembles, choirs, or even performing solo. I took up the flute as I was too small to handle a clarinet. The teachers there were all strong performers, who demonstrated this in lessons and in school concerts, playing live in assemblies, as well as taking us out to hear musical ensembles such as the Lindsay String Quartet, and to be involved in performances outside of school. It was fascinating to see them writing arrangements for ensembles to perform of pop music of the time, as well as classical music.

The idea that you could create music by writing it fascinated me. Eventually, I was sent to the Yorkshire College of Music in Headingley, Leeds, where I was taught by a number of piano teachers and excelled in my ABRSM Grade Exams and enjoyed exploring a wide range of repertoire for the piano as well as creating my own arrangements of pop chart music of the day for the piano. When I was offered a scholarship there for the progress that I was making, I began to ask the question – could there be a career doing something in music?

A commission to write a fanfare to open a concert series for the Philharmonia Orchestra’s concert season. I called it Incantation: To Seasons of Promise for Brass and Percussion.

What is the focus of the programme in which the Sphinx Virtuosi performed Elegy: In Memoriam, for their tour across the USA?

The theme of the concert programme focuses on the title, For Justice and Peace in conjunction with the nationwide 400 Years of Inequality. The works that are in the programme include, Damien Sneed’s Our Journey: 400 Years from Africa to Jamestown – from his Opera We Shall Overcome – which explores the plight of Africans forced into slavery, making use of musical styles from the African American diaspora. While Michael Abel’s Global Warming, celebrates diverse cultures.

Elegy is a moving string piece memorialising Stephen Lawrence, a teenage victim of racial violence. A new work by Xavier Foley, For Justice and Peace pays tribute to some of the divisiveness of today while offering light and hope, which was co-commissioned by Carnegie Hall.

In addition, there are classic works in the programme such as Romero’s Fuga con Pajarillo, providing an insight into Venezuelan musical culture. There is also Bartok’s Allegro Assai from Divertimento for Strings, written as World War II approached, whilst he hoped to leave turbulent Hungary for the US to experience a much more peaceful life; plus Schubert’s Presto from String Quartet in D minor - D.810 ‘Death and the Maiden.’ Schubert wrote this work a few years after being arrested for his rebellious confrontation of the authorities but doesn’t seem to manifest the use of force and challenge.

What was the thinking behind that piece?

‘Music expresses that which cannot be said and on which it is impossible to be silent’: Victor Hugo

Elegy was composed in February 1999 as a gesture of empathy after watching the shocking news coverage of the tragic murder of Stephen Lawrence. It was subsequently premiered, by invitation from the Princes’ Foundation, for the Stephen Lawrence Charitable Trust’s first Annual Memorial Lecture in September 2000.

The music is a slow, emotional and reflective piece, moving between C major and various minor tonalities throughout. The music is full of soulful harmonies with gentle dissonances in sonorous chords, under a plaintive melody: which characterise the heavy emotions brought to mind by this tragedy. Particularly poignant, is the first section in the piece where music for soloists in a sextet for two violins, viola and cello later on in the sombre cello solos.

The middle section is characterised by a solemn theme, accompanied by a march-like texture in Eb major moving forward to climax, before the recapitulation of material presented at the beginning returns. This section is abbreviated and ultimately leads to a cadence in C minor.

It is written in the English String music tradition, as many classical music listeners will not expect a BAME composer to have written the music. This is to provoke thought about what it takes to be a British citizen, along with the value placed on life, the rights, privileges and justice that will be accorded to British ethnic minorities in life, in the process of reflecting on this tragedy.

There is a need to place a higher value on the strength that comes from diverse peoples living together in Britain. We all have something valuable and very positive to contribute to the larger part of the puzzle of life in Britain today. Stephen Lawrence was deprived of the right to a life where he could use his amazing talents for the good of wider society. Nevertheless, we can press together across our communities to help realise his dreams.

My musical influences are eclectic as I enjoy listening to world music, folk mu-sic, classical music of all periods, popular music and it depends on what I am required to centre my focus on, as for what musical influences will be present in a score.

Although music is vibrant and alive in the UK as musicians, composers, and conductors drive forward their creative ideas in the current climate, it is becoming a cultural preserve that is gradually only becoming accessible to those who are from wealthy backgrounds. This is a huge concern for future generations. Why should this be so?

Furthermore, with financial cuts to the arts world and arts education, there is a real worry regarding how musical arts opportunities will be made available to the younger generations. Fewer schools are providing music at GCSE and A level, so how will the development of a new generation of musicians take place? How will it be possible to replenish the UK’s creative arts industry and keep the success that has been achieved over the years moving forwards if there is less funding for the arts in educational establishments from primary and secondary levels up to conservatoire and University levels?

With so many centuries of examples of sublime and transcendent music written by celebrated composers, it is a challenge for the 21st century composer to combat the musical prejudice of the critics and the cognoscenti who will open the gate of recognition for the composers that they are willing to celebrate.

Do you think it is diverse enough?

Recent thinking and research is flagging up some trends in the music industry, that highlight changes that need to be made to make things more inclusive and fairer for all participants. For example, it has been said that more women need to be included in programming and commissioning in concert programmes. Diversity in composition is also being discussed. I guess we all need to get to a place in these discussions where the commissioning/programming practice enables us all to earn a living in the very near future.

Be true to your artistic vision. Find a mentor who can help you with this.

For Justice and Peace for Violin, Bass and String Orchestra (NY Premiere, co-commissioned by Carnegie Hall) by Xavier Foley

What next for you?

Finishing off a brief for EMI Production Music, starting work on a commission to write a piece for String Quartet.