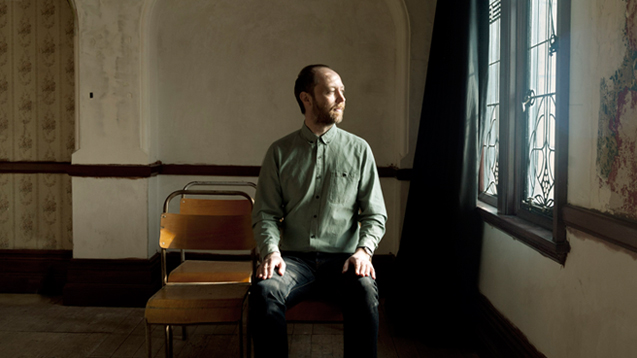 Composer, bassist and producer Phil France on how full immersion in the world of water helped inform his recently re-released meditative record, The Swimmer…

Composer, bassist and producer Phil France was a key member of Jason Swinscoe’s Cinematic Orchestra but is now forging his own path, with the re-release of his debut record, The Swimmer.

Picked up by Matt Halsall and his Gondwana Records imprint, the release is a soundtrack to a film that’s yet to be made, a meditative take on the physical and mental states offered by swimming as well as the dangers it affords.

It strikes similar notes to those of his heroes, the likes of John Carpenter and Vangelis as well as showing off his roots at the Guildhall School of Music and Drama and his experiences with Jason.

Now based in Manchester where a chance meeting with Gondwana’s Matt Halsall via a Mr Scruff session led to the re-issue, Phil is currently busying himself with new material. We take a deep dive into his musical world…

At infant school I was one of a handful of kids who were asked if they wanted to learn the violin because we’d displayed some musical aptitude. But I didn't like the violin. When I was a bit older I loved The Police and thought the guitar that Sting played looked interesting. I found out it was a bass. So I got a paper round and saved up my money and bought a second hand Fender Precision copy. It all started from there.

Who or what inspired you to want to make your own music?

I always wrote little bits of original music, even after I’d just started learning. My attempts at compositions were well received by peers or teachers and that gave me the confidence to continue. This developed as I got older and became more and more obsessed by music. I naturally got involved in music composition in groups I played with.

You are well known for working with the Cinematic Orchestra - how did you get involved with Jason Swinscoe?

A friend called Gavin McGrath put Jason and I back in touch in London around 1997. I’d finished the post graduate jazz and studio music course at the Guildhall, was working full time in a record shop and playing in a band round the north London pub circuit in the evenings. I was doing a gig at the Hope & Anchor in Islington, which I remember because the guitarist smashed his Rickenbacker into his amp during the set, and Jason and I re-connected there because he was looking for a bassist. I listened to some tapes of his music, was into it, and it all developed from there.

And what did you learn from your experiences with the group?

A hell of a lot. I’m really proud of all my work with The Cinematic Orchestra and Jason and I are good friends. I think we both appreciate that it is rare to have a creative partnership that just works and works well. One major learning experience would be being introduced to electronic music. Another would be using computers in the creative and production processes.

The Swimmer is your debut solo LP and getting a re-issue this year via Gondwana - could you explain what it’s about and how you came to make it?

I’d always wanted to make a solo record and around 2009 I decided to commit properly to the process after moving back to Yorkshire. I’ve always been fascinated by water but had never been confident in it so I took some time and taught myself how to swim properly. It was at this point that I started to think what my album could be about, and I wrote the title track, The Swimmer. I was thinking about big blocks of sound, minimal and electronically influenced, that I could develop and shift through each of the compositions. So the reality of swimming - the focusing on breathing, the repetitive physical motion and the sense of improved well-being - were qualities I tried to capture in the music.

I wanted a bit of edge in there as well, water is dangerous if you don’t know what you’re doing or can’t swim, but I definitely wanted more hope than darkness. I had other ideas about how overwhelming it feels at times living in the digital age, we are all swimmers in a sea of digital information so to speak, and that seems more relevant now than ever. So I took myself off, learned Logic properly, bought a tape machine from the old Yorkshire TV studios in Leeds and set about figuring it all out. I was supported in this by musical friends I've made over the years.

What is next for you?

I’ve been keeping busy in the studio for a while now. So we've just unveiled The Swimmer re-release on Gondwana along with some remixes which I’m excited about. I’ve just started a film score and work on my second album is going well. I’m excited about how it’s developing.

Have you any advice for new and emerging composers?

Keep going, stick at it. It took me ages to get The Swimmer out into the world but it was all worth it. Get people involved, learn to communicate well (if you don't already do so) and try to keep a healthy perspective. Get your social media profiles together. Obviously there's some important discussion about the financial implications of the internet in the music industry but one of the good aspects is that it's relatively easy for anyone to showcase work. Hopefully that can contribute to building towards commercial viability…

The Swimmer is out now. Listen to the title song from the record below.