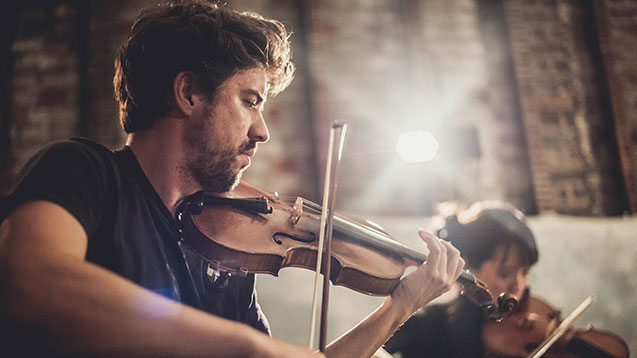 'As audiences for classical music grow older and smaller, it’s vital that new generations of listeners are created' - Phaedra violinist Peter Granell on how experimental ensembles are keeping the genre alive...

Cross-genre collective Phaedra are part of a new breed of ensembles tearing up the rules of classical and creating a trailblazing hotpot of sounds in their wake.

'As audiences for classical music grow older and smaller, it’s vital that new generations of listeners are created, and that is achieved by collaboration across genres and keeping music relevant,' says violinist and co-founder Phil Granell, explaining how they're working to keep the genre alive.

With a string quartet at its core, the ensemble collaborate with musicians from the jazz, electronic, folk and classical worlds and are currently getting set for the next event in their VOX series: a three-part celebration of music which explores the human voice through tradition, experimentation, and technology.

Here, Phil tells us more about Phaedra's experimental nature and shares his thoughts on the contemporary scene...

What’s the premise behind Phaedra and how did you all come together?

Phaedra came about as a way to bring together musicians from the London scene to play music that we all had a shared interest in. We are all freelance players so would often be working together on projects anyway, so it made sense to create Phaedra ensemble. Most of us have a classical background, in that we all studied at music colleges, but we’re also involved with music from outside of that world.

What’s the thinking behind the VOX series?

The VOX project has been going for a few years now and the next concert will be VOX:05. It came about from a fascination with the human voice and how it is used by composers and musicians in their work, particularly in innovative or experimental ways.

This can include using found sounds such as in Gavin Bryar’s iconic Jesus' Blood where he recorded the voice of a homeless man singing in Waterloo and then wrote music that gets performed live with the recording. New technologies are explored, speech rhythms used to create music and often the musicians themselves are asked to speak, sing or vocalise – which is definitely not usual for your average string quartet!

What can we expect from the May event?

We’re really excited about VOX:05 - it’s a great programme with a new commission from the brilliant Manchester-based composer/ sound artist Vitalija Glovackyte and we’re really looking forward to performing her music. Also this concert looks at works from the New York downtown scene with music from composers Meredith Monk, David Lang and John Moran. Each work is engaging it its own way. Meredith Monk is a such an iconic performer/composer in her own right and we play her string quartet String Songs. It's fascinating to see how she translates her vocal style of composition into a work for string quartet; it’s also haunting and beautiful. Other works from the programme include narrators, recordings of recorded letters and a solo dancer.

The ensemble works across genres. How does this impact your work and progression as musicians? Is there anything you’ve learned/gained by not staying within the parameters of traditional classical music?

I think we all feel as musicians that there is so much to be learned and enjoyed by working collaboratively with other artists from different genres and art forms. As classical musicians you get trained in a very focused way, which is great for a career in that field as it’s a very competitive environment with extremely high standards of performance. Working outside of those parameters means you have to explore different ways of making music, often working with artists that don’t share the same musical language or use of written notation for example, so you need to communicate differently, improvise more and take on-board ideas very quickly to understand what they are looking to create. It’s also very important to have a love, respect and understanding of music and art that’s not from that tradition.

Have you experienced any resistance from the traditional classical world?

In the past there was a certain resistance and snobbery from the classical music establishment about non-classical, avant garde or experimental music but I think those days are gone. As audiences for classical music grow older and smaller, it’s vital that new generations of listeners are created and that is achieved by collaboration across genres and keeping music relevant. Actually, classical musicians are generally really open-minded and supportive of new music, even if they aren’t performing it themselves!

Are there any other genres/styles the ensemble is keen to explore?

We have an ongoing collaboration with the fantastic British Asian singer Susheela Raman and that has given us the opportunity of working with some incredible musicians from different cultures. We spent a week in Abu Dhabi last year at the NYU campus there working and performing with Susheela and her band, other musicians from Europe and with Qawwali musicians from Pakistan, the Rizwan-Muazzam Qawals. This year we’ll be reworking Javanese Gamalan music for strings and marimba for performances in Paris of her new album Ghost Gamalan. Gamalan has always interested western composers and it's such an incredible sound world and one I’ve always wanted to explore.

Apart from this, there are also composers and other musicians you want to work with and this has always been central to the VOX project. Jamie Hamilton (the composer who I run the ensemble with) and I will be constantly looking for new music to play, or composers and artists we want to work with. We’re very fortunate to receive Arts Council funding for the VOX project and that is incredibly helpful for us and allows us to fund collaborations and new works.

The scene has really blown up in the last few years and there is so much interesting stuff getting put on weekly. A lot of that is happening in London and being based there, we see a lot of that, but Manchester and Birmingham also have thriving experimental music scenes too.

Kammer Klang is a fantastic experimental concert series that takes place at Cafe Oto in Dalston and has been running for a while now and sets the bar very high in terms of varied content and invited guest performers. Other groups such as Filthy Lucre and the composers collective Bastard Assignments are also doing really great work that is fun, engaging and fresh. 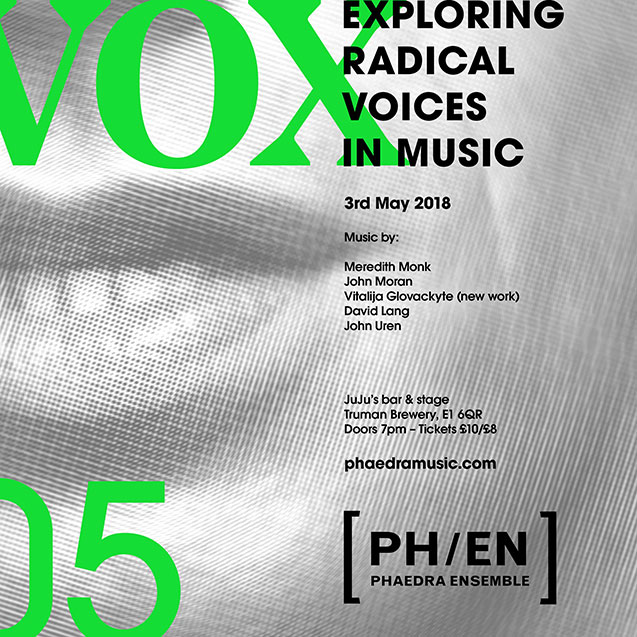