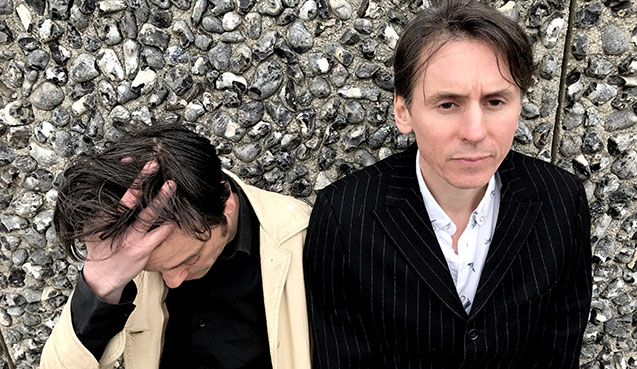 'A cocktail of excitement and frustration in pretty much equal measures': Pete Fij and Terry Bickers on their old Creation Records days and the making of their new LP, We Are Millionaires...

Creation Records’ stalwarts Pete Fij and Terry Bickers may have previous form in iconic indie bands Adorable and House of Love respectively – but their new sonic adventures equally measure up.

Following a long mutual appreciation for each other’s work, they hooked up for their debut set Broken Heart Surgery back in 2014.

The self-described ‘party killer’ was a dark and broody introduction to their combined talents, carrying a pastoral leaning absent from their earlier work.

Now back with album number two, We Are Millionaires, Pete and Terry are intent on tickling our ears with more lavish instrumentation. The set is still built around Pete’s gallows humour, but Terry’s lightness of touch adds a whole new dimension – a reminder of the ‘god like genuis’ status bestowed on him in the nineties.

With the album dropping this week, and with a clutch of live dates on the cards (kicking off this Saturday in Worthing), we ask the pair to let us in on their musical processes….

What’s the inspiration behind your new album We Are Millionaires?
Pete: We didn’t set out with any blueprint or manifesto as such, other than maybe trying to write something with a touch more optimism than the last album BROKEN HEART SURGERY which was a bit of a party killer. As we wrote the songs however there was the realisation that like moths to a flame we seem drawn to the minor chords and the melancholic however hard we try, and so instead of fighting it we embraced it – the title track is about this whole process. 'If the melancholy that we share was common currency we’d be millionaires.'

How did it come together?
Pete: After having worked together for eight years we’ve now learned each other’s quirks, so the whole process of writing and recording is relatively straight forward, if long winded affair. We work in different ways – I’m quite impetuous and improvisational whilst Terry is meticulous and crafted.

Where did you record it?
Pete: We recorded it in a lovely studio in Hove called Church Road with Julian Tardo, the producer of our previous album. We’re comfortable there and it feels very much like a second home.

How did you find the Kickstarter experience? What did you learn about the process?
Pete: We did Kickstarter for our first album quite reluctantly, more as a last resort but we found the process really rewarding, not only financially but perhaps more importantly by making a connection with our audience which I didn’t expect, so it was a no brainer this time round. When you’re a smaller act, getting that sense of support from fans is really energising and inspiring. I can’t recommend it highly enough.

How do you think your sound has evolved since Broken Heart Surgery?
Pete: This album is definitely a bit more expansive than Broken Heart Surgery which was quite a raw album – on the first album the stripped arrangements suited the intimate nature of the subject matter. On this album, we widened out a little both lyrically and musically.

You’ve both been making music for years now – what keeps you going?
Pete: For me it’s just a drive within me – I couldn’t not make music. When I am driving or walking down the street there’s a soundtrack of new songs in my head. I don’t need to pick up an instrument as I can hear the songs pretty much mapped out in my head. I’m not necessarily driven so much by the need to make them available to a wider audience – I sometimes have to push myself to do some of the trappings of a conventional musical career – recording and releasing, though there comes a point when there is a backlog of songs stacking up in my head so I have to get them out to the wider world to give myself more room for the new songs that are coming up from behind.

Terry: I get a lot of satisfaction from writing and performing music, it’s my craft. It also serves as a way of communicating without talking. It’s always been an important outlet for me.

What are your most abiding memories of your Creation days?
Terry: Recording the House of Love’s eponymous album at Greenhouse Studios, which was situated near Old Street, London. Playing with The House of Love at Reading festival in 1989. During the gig someone threw a football on to the stage and I managed to kick it back into the crowd on the volley! This was a big achievement for me as my mates at school were miles better than me at football and I’d always miss easy goals.

Pete: A cocktail of excitement and frustration in pretty much equal measures. It was the best of times, it was the worst of times.

Have you any thoughts on the industry as it is now?
Pete: It has changed so much from when I started out – growth of the internet and affordability of recording now means there are so many more quality releases out there. It means there’s an opportunity to reach out to an audience, but there are simultaneously so many more great tunes you are up against. In early nineties it was label or nothing – now that model has changed significantly.

What’s next for you?
Pete: Taking the album on the road to see what the songs sound like live. After that I have a head full of songs that probably need to get out!

We Are Millionaires is out this Friday, 21 July.