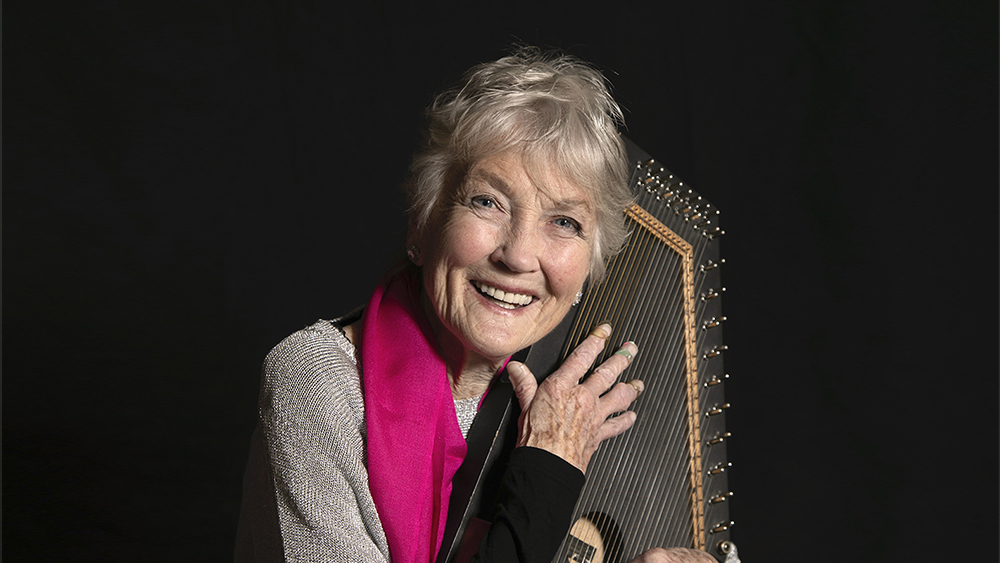 ‘I began to realise that the earth will only survive if women run it.’ Kate Hutchinson speaks to feminist activist songmaker Peggy Seeger as she approaches the release of what is said to be her final album following a 60-year career.

Peggy Seeger is considering her inhibited years as a young American musician finding her way in the 1950s and ‘60s. There was her infamous affair with Ewan MacColl, with whom she started the English folk revival. The time she married a friend so she could stay in the country because MacColl already had a wife. When she travelled to Cuba to entertain Fidel Castro. Did uppers to stay awake for shows. Or when she went down a mine to make a groundbreaking audio documentary for the BBC. ‘I was a loose cannon. Still am,’ she says, her remarkably blue eyes gleaming.

And then there is, of course, her vast vault of songs, ones that are anti-war, pro-choice, about apartheid, domestic violence, nuclear pollution, housework, hormones, many of which Seeger was told were too political for the day. They never made her as famous as the singers that she helped paved the way for like Bob Dylan and Joan Baez, whose protest songs are infamous, but she’s an active activist, nonetheless. ‘I’ve marched and been thrown against a fence and lost a tooth,’ and been confronted ‘by a police horse when I was pregnant,’ says Seeger. ‘We objected on our own levels.’

Seeger is on a video call from her home in the Oxfordshire countryside and her sprightly energy is enviable. She still practises her banjo every day and has been busying herself during the successive lockdowns with regular streamed performances, ‘Peggy at 5 on Sunday’. It’s here that she relays her vast knowledge of traditional music – she doesn’t much like the term but we commonly call them ‘folk’ songs – that otherwise might be lost to time.

Before the pandemic hit, however, Seeger had been feeling less seen. She is about to release a new album, First Farewell, recorded with her two sons, Neill and Calum, and daughter-in-law Kate St John. The album’s piano arrangements are in part a tribute to her mother Ruth Crawford Seeger, a modernist composer who was the first woman to receive a Guggenheim fellowship and who died when Seeger was 18. One of the album’s most striking tracks is called The Invisible Woman.

The song came about when Neill visited her one day, lay down on her sofa, ‘and said, ‘Mum, I’m 61 and I feel invisible’. So I said, try being a woman!’ she says. ‘No man ever becomes as invisible as an 85-year-old woman. The way people just look past you... Young people pay little or no attention.’ If she’s at a social gathering, they ‘generally don't want to talk to me.’

This truth is heart breaking because Seeger has plenty to say. She rails against the patriarchy, expresses deep concern about the climate crisis and is currently plotting a new song to help campaign against her nearby fields being ruined by developers. And her life is fascinating.

Seeger was born in 1935, New York, into a folk dynasty – her father, Charles, was a musicologist, while half-brother Pete was a star of the nascent American folk scene. With MacColl, Seeger set off on her own path. The story goes that they met when she was 21 in the mid-50s, after the song collector Alan Lomax had invited her to play with them on a TV show in London. MacColl was 20 years her senior and married, but it was the beginning of a love affair that helped to put folk music back on the map, as they travelled the UK collecting old songs and sharing them with the world.

MacColl was already an established folk singer but Seeger, a multi-instrumentalist, made his music sing. ‘He was good, but I don’t think he would have made it on his own,’ says Seeger. ‘I added the accompaniment, the feminine principle.’ She wrote songs herself, too, and sang the ones he’d written for her. The most famous of those was The First Time Ever I Saw Your Face – much to their surprise, it was turned into a Grammy-winning hit by Roberta Flack in 1972. I never would have thought First Time Ever would have gone pop. It has been covered by 400 singers and some of it is ‘way off the wall,’ says Seeger. At first, her and MacColl thought Flack’s version was ‘horrendous’ (though she appreciates it now), which goes some way to explain the purism that the pair were notorious for. ‘It’s as if you are to make a heavy metal version of Amazing Grace. A song in its inception carries a style with it. The songwriter has a style in mind, right?’

Intention and context is everything, in Seeger’s mind – sentiments that chime with conversations around appropriation today. But back when Seeger was saying it, it caused shockwaves among folk connoisseurs. At their London venue The Singers Club, they enforced a ‘policy’ where performers could only sing ‘songs that were in a language that you spoke, from a culture that you knew,’ she explains. It started because of ‘some of the English singers singing Lead Belly and Woody Guthrie.’

Seeger had grown up with the legendary American bluesman and folk troubadour visiting her family house. ‘We were brought up with their singing, with the modesty and tragedy of it, and the way it meshed in with their lives,’ she says. ‘And then all of a sudden, here’s a little Cockney stepping up to sing [Lead Belly’s signature song] Goodnight, Irene.’ That is a scenario that sounds rather familiar, even in 2021. ‘Well,’ she begins. ‘They used to say that a proper artist is 50 years before their time and that's what we were.’

She’s not saying that white people shouldn’t sing black songs or vice versa, just that in her mind ‘it doesn't feel truthful.’

‘In a way, it’s expanding on that business of whether men can be feminists. If they haven't been brought up at the receiving end of a patriarchy, they don't know what it's like.’

Seeger found her feminist awakening after she’d written the the 1970 song I’m Gonna Be An Engineer, which was embraced by the women’s movement. MacColl had asked her to write a song for a theatrical group to celebrate ‘the year of the woman’ but it resonated so much that she was invited to sing it at feminist groups. They wanted more songs, and something clicked, so she began writing albums of them. Today, she is a steadfast eco-feminist. Seeger and MacColl, along with Charles Parker, made the seminal Radio Ballads for BBC about the mining industry. But now she sings songs like new one Lubrication – the sexual image is to draw you in, but it’s really about her fears of fossil fuels. ‘When you really get involved with ecology, you realise that we live in a patriarchy,’ says Seeger. ‘I began to realise that the earth will only survive if women run it.’

In her 2017 memoir, Seeger makes several references to experiences she had ‘before’ she was a feminist and describes a few moments where MacColl’s behaviour doesn’t seem fair. Does she look back on it any differently? ‘Even though Ewan was very macho, he was proud of what I did,’ says Seeger, ‘and we were equal on the stage.’ But, she adds, ‘one of the things that really hit me after he died was the fact that whenever anybody came to interview us, they always held the microphone up to him first. I realise how many ways he took over stuff and took credit for it.’

Seeger and her current partner, Irene Pyper-Scott, realised they were in love just before MacColl died in 1989 and the two married in a civil ceremony in 2010. Incredibly, however, Pyper-Scott has lived in New Zealand for the past 13 years and they haven’t seen each other physically for two of those. ‘I used to go over there for three months of our winter, she’s come here for three months of her winter. But two years ago, we decided that, ecologically, that was just stupid.’

Always innovating and ahead of the curve, Seeger must be one of the only octogenarians in a long-distance relationship with their spouse, though it must be incredibly hard. ‘I don't know when we'll see each other again because neither of us wants to fly,’ she says. What are they going to do? ‘Very good question,’ she says with a tone that suggests she doesn’t quite know. ‘She sees me on YouTube and things. But she’s not letting me see her. She says, ‘I've aged so much’. But we’re managing. We talk every morning, every evening.’

And with that, Peggy Seeger has to go. Her friend, who is her bubble, is coming over for a game of Scrabble. She is always moving on, always pushing forward. Even as she prepares to wind down her 65-year-career, the clue to her unyielding work ethic is even present in her new album’s title: she might be saying goodbye, but this is only her first farewell. It likely and most hopefully won’t be her last.

Peggy's new single How I Long For Peace on is available on all platforms now.