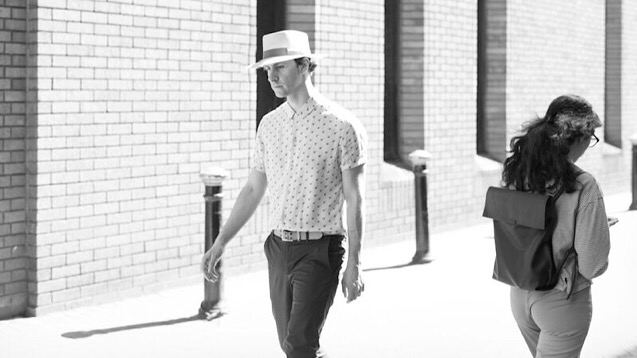 The indie hero and Maxïmo Park frontman chats musical longevity and lets us in on the making of his new album...

'A lot of artists, as they get older, just rest on their laurels. I feel very grateful to have the chance to make music on a full-time basis,' says Paul Smith, indie hero and frontman of Maxïmo Park.

He's chatting about the secret to longevity in the business and we're all ears. It's been 13 years since the Mercury Prize nominated A Certain Trigger was released, and in that time, Maxïmo Park have maintained a steady flow of creativity, while Paul is on his fourth record as a solo artist.

Set for release on his own label Billingham Records on 26 October, Diagrams is a collection of old and new songs that take literary reference in part, from Denis Johnson's book of short stories, Jesus' Son.

Speaking about how the book's interconnected characters inspired him to use snapshots of his own experiences, he tells M: 'I thought, maybe I can add a little bit of something uneasy into these personal details or things that I’ve seen, and situate them inside a different kind of life.'

True to Paul Smith form, new single Single Rabbit is a punchy and direct track, full of musical tension and reflective thought, set against the 'low-budget romance' of the seaside.

Eager to find out more about the album, we caught up for a chat...

How did Diagrams come together?

I’ve sort of pieced it together over the last nine years; there are songs I was playing on my first solo tour in 2010. I looked at what songs I had left over that didn’t fit on the first two solo records and thought some of these will make a new record - and almost complete the trilogy of records that I’ve made.

I’ve been working with Andrew Hodson who is in a band called Warm Digits who are really good. He works in a community studio in Manchester; I send a lot of the stuff over to him and he’ll do the drums on it. Over the last three years since my last solo record, we’ve just been slowly doing this in our spare time. Warm Digits are out doing lots of gigs so he’s got less and less time to actually work on stuff. I’ve been eager to get the songs out. Waiting this long sorts the wheat from the chaff.

If there is anything that ties them together, it's that these are like short stories in comparison to the first two records. The Beauty Contest on the record was inspired by being in London, coming home from some all-night party and seeing loads of young girls coming back from a beauty contest on the tube. It was pretty surreal seeing that.

When I was making this record, I re-read Jesus' Son by Denis Johnson. His stories are very much about the dark underbelly of America in the late 1970s, so my songs are very different, but I also thought maybe I can add a little bit of something uneasy into these personal details or things that I’ve seen, and situate them inside a different kind of life.

The new single Silver Rabbit is a story of self-doubt. Has that ever been something that's affected you in your career?

Definitely, especially working by yourself. Even in the band it’s a strange thing: writing the songs is one thing and wondering whether you’ve got the right combination of hooks, melodies and lyrics that mean something. But going out in front of people and saying 'this is what we are giving you' is quite another. I feel a bit more comfortable about it now, having done it for 13 years.

In the middle of a gig, if somebody walks out or something, I can see them and it does affect you. In the early days, if somebody shouted something out, I responded to it. I don’t want to be somebody who is just in cruise control going out there every night doing the same stuff.

There is constant self-doubt as part of the musician's life. I recently went to see a woman who goes under the name of The Weather Station, she put out one of my favourite records of the last year or so. I went along and just thought she is so good: the band are so tight, she’s a great singer, the songs are really evocative and smart. And I was just thinking, 'why do I bother?' [laughs].

Music is not a competition. But it’s good because it also spurs you on. If my songs aren’t as good as Joni Mitchell and Leonard Cohen songs, then why not? How can I make them better? It makes you work harder. But then you don’t want to get into the habit of trying too hard. You have to be yourself as well.

This is your fourth solo album now. Looking back, how do you think your sound has evolved?

I often take detours and there are little curveballs in my discography. I suppose if I was to chart a progression, it would be that I try to refine what I’m doing and evolve. I would say even though I’m in a similar position where I’m recording stuff at home, I’ve probably got better at recording.

It’s been 14 years since A Certain Trigger. What’s your secret to longevity in the industry?

I love music. I wouldn’t want to put out a bad record; there are a lot of bad records out there and they are made to make money or to serve somebody’s ego. A lot of artists, as they get older, just rest on their laurels. I feel very grateful to have the chance to make music on a full-time basis. A lot of that full-time basis is answering emails, organising things and rehearsing and trying to make what you’ve got better.

As a band, we always try to do something different. When I’m by myself I try to write a song that I haven’t written before. I’m glad people are still interested and still buying our records. That also inspires me. It makes you get up in the morning and want to do something good.

What would you say is the biggest thing you’ve learned as a songwriter?

Trust your own voice. You’re inspired by so many things when you first start to make music and it’s easy to become a facsimile of something else. When we first started, I was interested in being political and sort of furious about a lot of things. It just came across really cliched. It never even got into any of the songs. I looked at what I had written and thought, well I think I’m good at emotional stuff. Sure enough, you find ways of integrating those things into your records.

I'll be touring Diagrams in November. We are hoping to get back writing a new Maxïmo Park record any time from now really. If somebody’s got a song these days, it will go into dropbox and we can all listen to it. I’ll probably make a record with Rachel Unthank from The Unthanks as well that we’ve been putting together. And yeah, if anybody wants me to play with my band and other solo stuff, get in touch!