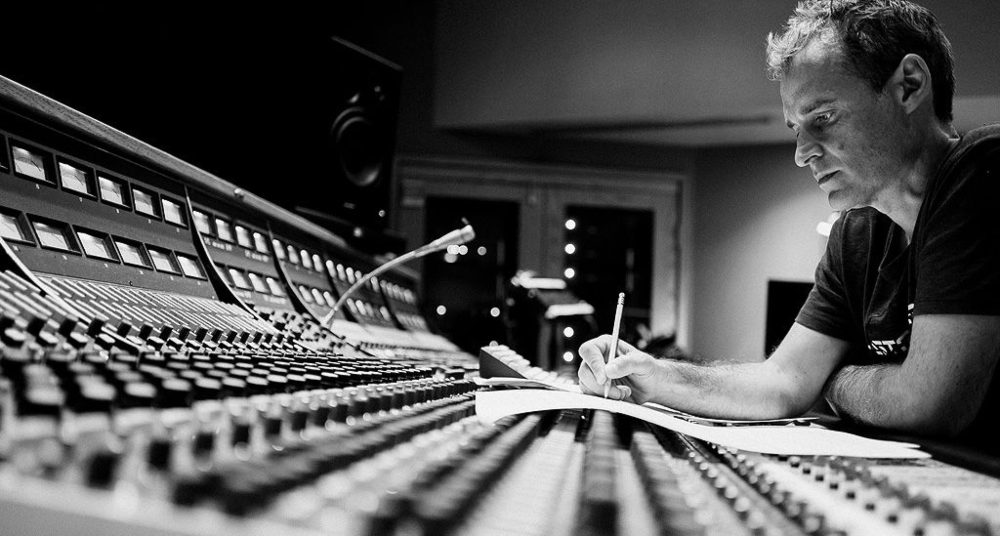 M Magazine caught up with film, TV and game composer Paul Leonard-Morgan to talk about Tales of the Loop, collaborating with Philip Glass on his first ever TV score and going back to basics.

Today marks the release of Tales from the Loop, an Amazon Prime series scored in collaboration between Paul and Philip Glass - a man who is widely regarded as one the most influential composers of the late 20th century.

We caught up with Paul to chat about composing for TV, collaborating with Glass on his first ever TV score and going back to basics.

Can you start by telling us how the collaboration with Philip Glass came about? Do you know how/why the two of you were paired?

Mark Romanek had sent the script to Philip, along with some images, and Philip was intrigued. He’s also one of the busiest composers alive! Someone had suggested my name to Nathaniel (the show runner) and Mark knew of my work through my score to Wormwood with Errol Morris. I think the fact that I’ve scored Errol’s last three or four films, and Philip has obviously got such a fantastic collaborative relationship with Errol led them to think: ‘They’ve got similar sensibilities, let’s put them in the same room and see what happens!’

How does it feel to be working with Philip on his first TV score?

It’s a huge honour. It was fascinating how our collaboration evolved so organically. He would send me some chords and motifs, I would add my own melodies, add some of my own – we ended up sending stuff back and forth, changing each other’s work, chatting on the phone about instrumentation, etc – he’s just such an incredible human being, let alone brilliant artist. He would listen to what I had done and then give me his take on my cues. In the end (hopefully) it’s not a case of picking put which cues are Philip’s and which are mine – they’re all created by both of us as part of the process.

What would you say was the most important thing you have learned while working together?

Chord changes and less is more. I remember flying over to chat to Philip and he said something along the lines of ‘Paul, your melodies are just beautiful, but your chords are too predictable’. And then proceeded to show me what he would have done with my melodies. Similarly, much of the time I have a tendency to lean on densely orchestrated material, whereas he would suggest stripping stuff right down. His mind is incredible.

Can we get a little bit of insight on your creative process with Tales from the Loop?

I would say that as the series evolved, we started thinning out the number of instrumentalists. We had a huge orchestra for episodes one and 2, but we then decided that it didn’t need it for many of the other episodes. Philip had this lovely chord sequence, and I came up with a melody on the cello. We looked at each other and said, ‘that’s it, that’s the sound of the show’. A soundtrack to a series can evolve massively, but I feel we nailed the sound pretty early on. The cello and piano became our secret weapon! We also wanted to introduce some strange instruments. The Loop is this otherworldly scientific experiment – we wanted to have the audience identify with some unique sounds, so we tried a solo recorder, an Egyptian Ney, and the most fun was making a lithophone – finding stones of different sizes, balancing them on some metal and wire, and creating a library out of it. It was the most fundamental sound we could think of – hitting stones and tuning them up. It’s definitely not something I’ve tried before. I think he thought I was a little crazy, but it worked well!

'I’ve genuinely never seen anything like it on – the cinematography, acting, directing, scripts, it’s unreal.'

The music was written during the planning of the show rather than as an after-effect. How did that impact the work you created?

It was fantastic – it gave us the creative freedom to experiment. Much of the time, I’m brought onto a pilot and get 2 weeks to do the entire time. With this, we had three months of looking at Simon’s beautiful visuals, just writing music, and collaborating with mark and Nathaniel so that they could have some of our music in mind while they were shooting. Nathaniel was adamant that he wanted a timeless score, one with really strong melodies that people will listen to outwith the show. That doesn’t happen that often as a composer – much of the time it’s about soundscapes – so to get to work on something where the music is so integral was amazing.

They’re very different beasts, usually – television is often wall to wall. People are afraid of space in the scores. Viewers have so many distractions (Facebook, Instagram, Twitter, reading M magazine...) that producers are often scared to leave silence. With film the viewer is sat in a theatre and has no choice but to watch / listen, so every note and space you make is of equal importance. That’s what is so wonderful about Tales From The Loop. They’re like eight mini films. I’ve genuinely never seen anything like it on – the cinematography, acting, directing, scripts, it’s unreal. And having the music be such an integral part – Nathaniel would come to all the sessions and give input – made it feel such a special experience. A real collaboration amongst us all.

What can viewers expect to hear from the soundtrack?

Melodies, orchestra, real instruments. How many shows get full orchestras these days? Massive shout out to Jeremy and Ward at Disney, and to Ani on the post-production team – they gave us so much backing to achieve our vision. Setting out to do a score with no electronica at all is a challenge these days, but it made such a difference.

In your day-to-day life, what do you find inspires the that work you create?

Nature. I tend to go for a run most mornings at about 5:30 before the kids get up, and just that 30 minutes of peace, running with the wind in my hair amongst the trees and hills, gets my brain working. I’m from Scotland, so the mountains and lochs make me feel alive.

What comes next for you?

I’m working on three films at the moment, finishing up a UK series and a US series, we’re in the closing stages of Cyberpunk (October release) and I’ve been commissioned to write my first concerto, so things are a bit mental. With everything that’s happening with lockdown, I feel incredibly fortunate to be working on these projects which are already shot. It’s just terrible for all industries across the world, not just ours. But as a community, I hope we come out the other side stronger and a little more supportive of each other, as there seems to be a real feel of ‘in it together’ amongst my colleagues at the moment.

Tales from the Loop and its accompanying soundtrack are out today, 3 April.