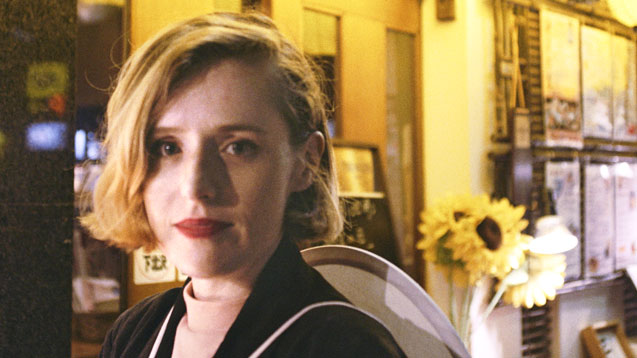 'I’m ready to keep reinventing myself': Patience's Roxanne Clifford on life after Veronica Falls and why Italo-disco is her new jam...

Since the band’s formation in 2009 she’d helped define their signature sound and style, ploughing her vocal viscera and glorious minor-key harmonics into two ace albums.

Although they were dubbed C86 revivalists, Veronica Falls’ lo-fi indie was in no way defanged by all the reverb and jangly guitars , and the foursome always made it their business to keep enough bite in there to really go some live.

So when the band’s other guitarist/singer James Hoare became more involved with his new band Ultimate Painting with Jack Cooper, it followed that Roxanne would carry on making erudite alt-rock.

Defying the laws of British indie, she instead swapped London for sunny LA and resurfaced with a stripped-back solo sound centred round outrageously hooky melodies and stark synths. This was pure pop, but in the best possible taste.

Now with three ace singles under her belt, including the latest electronic confection White of an Eye for Night School Records, she’s prepping her debut solo record.

What's the thinking behind Patience?

Patience sort of accidentally developed whilst I was in a creative lull after Veronica Falls. I had been playing around with a couple of drum machines and a synthesiser at home and exploring new ways of writing songs. It felt like a more liberating prospect for me to go with the electronic approach rather than do another guitar band at the time. I started to come up with ideas I liked and decided to run with it.

You've left London for LA - how has that influenced your sound?

I definitely feel open to try new things and less restricted by a scene or old baggage. It's almost like starting fresh for me musically, I'm trying to take apart the songwriting process and build it back up from scratch. I've had a few hiccups because I keep changing my mind about which direction I want to take it in, but it's all a learning curve.

Does synth-pop feel like a natural area for you to explore?

I was drawn to it because it's music that I can demo in my bedroom, build like a jigsaw puzzle and get results quickly on my own. To be perfectly honest, synth-pop has never been my favourite genre as I've always been drawn to a less polished, organic sound with live instruments. However, as this projects develops I'm trying to merge some live and programmed elements together and steer away from the somewhat rudimentary approach I've had to date and find my own sound. I prefer a more stripped down and primitive production style to add intimacy, instead of the overblown eighties stuff.

What sounds, eras and songwriters are you most excited by at the moment?

My main influence for this particular project would be an endless list of female Italo Disco songs by Vivien Vee, Valerie Dore, Clio, Jessica Blue. Then there's Giorgio Moroder and Donna Summer. A newer artist I love is Marie Davidson and other influences are Laurie Anderson, Psychic TV, Anna Domino, Berntholer. I've also been listening to a ton of new age experimental ambient music that I find on the Sounds of the Dawn website.

How does it feel to front a project on your own?

Everything I do for this project has to be completely self-motivated, which can be hard. The good thing about having a band is that you always have people relying on you to show up to practice or to tell you when a song is finished or when something sounds good. There's a lot of self-doubt when you are completely in control but with that comes tons more excitement and rewards when you actually achieve something you are happy with.

How does your relationship towards Patience differ to Veronica Falls?

I was passionate about Veronica Falls and very invested in the band’s sound, image and identity. It started as a labour of love between friends who were driven but the main impetus for all of us was just to make music we liked and to have fun doing it, which is truly the only reason I still make music.

I have honestly never had grand aspirations to become a traditional 'pop star' of sorts as I find it quite an embarrassing concept for me personally, I just hope as many people hear my music as possible. I view Patience in much the same way but I'm a little older and easier on myself critically. I'm ready to keep reinventing myself and try new ways of expressing my ideas.

What do you make of UK pop at the moment and how does your music fit into all of that, if at all?

My nieces came to visit me in Los Angeles recently, they are complete pop music obsessives and forced me to listen to the UK Top 40 for two weeks straight while driving around. At first I was appalled by the state of modern British music but some of the songs started to grow on me and I do think that pop music today is doing something new.

The main thing that struck me was the complete lack of guitars and the similarity in the production over the tracks. There seems to be a trend where the drums and the vocals are very prominent and there is nothing much in between, it's very centred on the voice. I'm not sure where I fit in but if I can write a song as good as Ciao Adios by Anne-Marie then I will be happy.

What's next for you?

https://www.facebook.com/PatienceRoxanne/
Features
Back to top