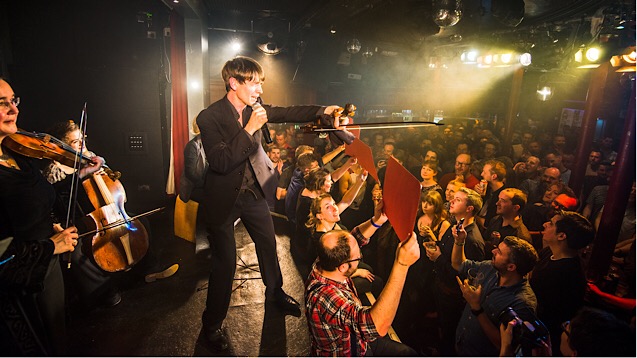 Orchestra Of The Age Of Enlightenment

'The musicians themselves have often found the intimate atmosphere in pubs transformative' - OAE's John Holmes on challenging the convention of concert halls...

Orchestra of the Age of Enlightenment (OAE) is a period-music orchestra that has been challenging convention since its inception three decades ago.

From residencies at the Southbank Centre and Glyndebourne, to pub shows which are helping to redefine the parameters of what exactly makes a concert 'a concert', the orchestra's ethos has always been to push for change and experimentation in the classical world.

'We’re more likely to challenge conventions; for example that convention of playing classical music in a concert hall, or the "rules" around concert hall etiquette that have sprung up to govern how people behave there,' explains John Holmes, director of marketing and audience development.

Taking place in smaller-scale pub and gig venues, the OAE's classical music events series, The Night Shift, has helped to attract a new and younger audience to baroque, classical and beyond, while also providing a unique experience for the musicians who, according to John, 'have often found the intimate atmosphere in pubs transformative'.

Meanwhile, its education programme reaches up to 10,000 people across the country each year, often in areas where children have little or no access to live classical music.

Here, in an extended interview from our upcoming feature on independent venues, John tells us why grassroots spaces have been crucial to the orchestra's development and what's coming up next...

Tell us about the ethos behind OAE - why do you think it still holds up today?

The OAE was founded as a player-run orchestra, which means our artistic decisions are taken by our musicians, rather than one single Artistic Director. We always play music on instruments from the time the music was written, which means we get closer to the sound world of that time.

We’re also inspired by the inquisitive, challenging spirit of the Enlightenment, that era of great leaps in science and political thought from which we take our name. I think this means we’re more likely to challenge conventions; for example that convention of playing classical music in a concert hall, or the ‘rules’ around concert hall etiquette that have sprung up to govern how people behave there.

Have any small venues, in particular, been key to the development of OAE?

Grassroots music venues have been absolutely crucial to The Night Shift, our series of informal classical music events that we’ve developed to appeal to people who don’t attend classical music in traditional concert halls - particularly those under the age of 35.

The Night Shift has been running since 2006, but in 2012 we made the shift to smaller-scale pub and gig venues for our first ever Night Shift Pub Tour. These gigs were quite a radical ways of presenting classical music, with two short sets of half an hour each. Drinks are allowed, interaction with the musicians on stage is encouraged, and we often have participatory finales, such as the orchestra and audience singing drinking songs by Henry Purcell together.

The musicians themselves have often found the intimate atmosphere in pubs transformative, often commenting that – despite the lack of the usual ‘rules’ around behaviour you’d find in a concert hall – that the audience listens more intently to the music and engages with it in a more open way.

Really key venues for us have been The George Tavern in Whitechapel, home to one of the first Night Shift pub gigs and a regular pub venue ever since, The Old Queen’s Head in Islington, where we tend to get our biggest pub audiences, and Peckham’s CLF Art Café, which we have started visiting recently and has really helped us reach audiences in that part of south London.


What are some of the most unusual venues to have hosted OAE performances and why?

As well as regular pub and gig venues, we have been the Resident Orchestra at Duckie - the legendary cabaret/ club night at the Royal Vauxhall Tavern. We’ve also played in Village Underground, Wilton’s Music Hall, a ferry to the Isle of Wight and a noodle bar in Plymouth.

How important do you think smaller, grassroots venues are, in giving a lifeline to new composers?

Although the OAE is a period instrument orchestra, we do commission composers to write new music for our period instruments. In 2013, we commissioned Kate Whitley, Satoko Doi-Luck and Kim B Ashton to write new music for The Night Shift pub tour, and in 2016 BBC Radio 3’s embedded composer Matthew Kaner wrote a new piece for four violins for a Night Shift at the Old Queen’s Head.

Performing in grassroots venues gives us the opportunity to commission new music for smaller orchestral forces than we could ever do on the concert platform, usually four or five musicians, and therefore explore a different sound world. It also helps us give opportunities to emerging composers who might not have written for period instruments before.

Have venue closures affected you in any way?

There hasn’t yet, thankfully, been a specific small venue that we perform in regularly that has shut down. However, the George Tavern has had a long battle with property developers for its survival, and we submitted a response to Tower Hamlets Borough Council’s planning department arguing that if it closed, we would no longer be able to perform to audiences in that part of east London.

What’s coming up next for OAE?

There will be more pub gigs in 2019, and we’re hoping to take Night Shift to new venues in outer London boroughs for the first time.