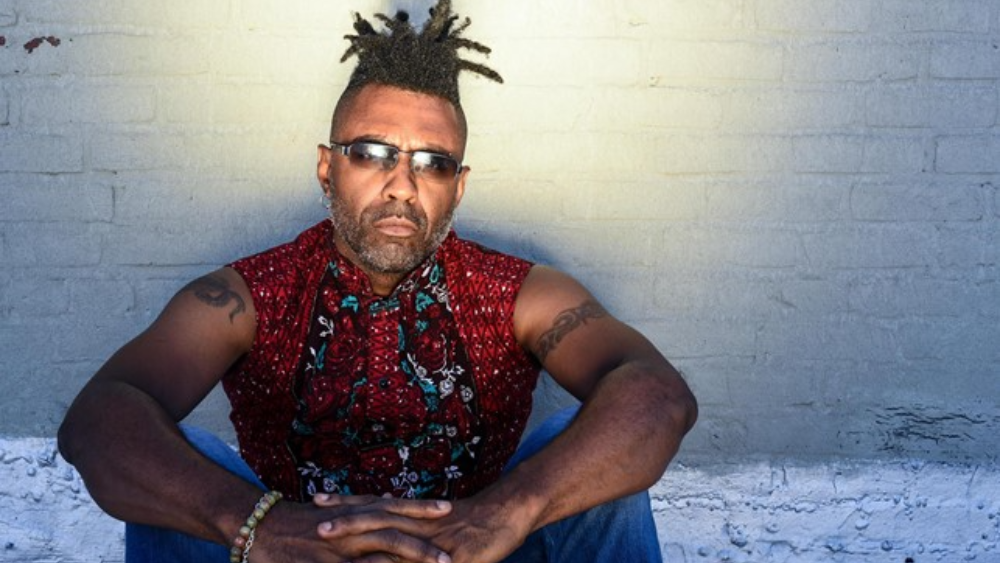 ‘My story has been going quite steadily for the last 35, 36 years. I just want to keep adding to the catalogue. This is something that I'm known for, that I produce a lot of quality music, and I just want to be able to keep that flow going.’

Often referred to as ‘the father of neo-soul’, Omar Lye-Fook has been making music for over three decades.

A classically trained multi-instrumentalist and singer-songwriter, There’s Nothing Like This was the album that gave his career momentum back in the early '90s, after it was picked up for re-release by Gilles Peterson’s Talkin’ Loud label and made it to #19 in the UK Albums Chart.

Despite never seeking the spotlight or mainstream popularity, Omar’s industry wide respect within the worlds of soul, jazz, funk and R&B, and a following that includes Stevie Wonder, Angie Stone and Erykah Badu, with whom he’s collaborated, speak volumes. So too, an MBE awarded in 2012 is an impressive confirmation of his impact.

Omar has also featured in stage productions, a BBC comedy series and a longstanding one-man show, proving acting is another string to his bow.

With album nine in the works, we spoke to Omar about his musical upbringing, how he’s making the most of lockdown and his views on the key shifts in the industry over time.

You can listen to Omar discussing his unique composition style in more detail on M Magazine's partner podcast What You Didn't Know About with songwriter Louise Golbey.

Julia: Hi Omar, where are you calling from today?

Julia: I know you have a really musical family. Can you describe what it was like growing up in that environment?

Omar: It was actually more what I did outside of the home that was more musical. I grew up separate from my dad. It wasn't until I was about 18 that I went to live with him, but I was in youth orchestras, brass bands, percussion ensembles. There was always something going on every, every weekend or in the evenings.

Julia: What age did you start playing instruments?

Omar: I started about eight because I got a cornet. My next-door neighbour, this old lady, Doris, had a cornet, which was my first thing I started to learn, and then started to learn piano and then percussion. That took up most of my time. Drums, as well, when I was about five or six.

Julia: Did you grow up knowing that you wanted to do music professionally?

Omar: Yes. I was always attracted by the fact that I heard musicians say they got paid 250 quid an hour. I thought, “That would suit me just fine, as well.” (Laughter)

Julia: I saw that you were offered a record deal when you were quite young, but you went to music school instead. If you'd gone down the record-deal route at such a young age, do you think things would have turned out differently for you?

Omar: I suppose it would have done, but yes, I just don't think I was ready at that time. I think the thing was when I chose to go to music school, I just wanted to get a bit more education under my belt.

Maybe [by signing a record deal so young] my career would have got started sooner. I might have burnt out quicker. They were trying to entice me with things like if I wanted to take limousines and stuff when I went to the States and staying at five-star hotels and stuff like that. Really, I wasn’t that interested in it at the time.

Julia: Is there a method to your music creation?

Omar: There's no hard-and-fast rule for what I do. I basically strip everything down to bass, drums and keys. That's where it's going to start, with one of those three instruments. Then you, sort of, make the layers and stuff in terms of production, in terms of the arrangement and the instruments. It all has to come together in a certain way, but I always try and make each project sound different to the last.

Julia: Do you tend to bounce ideas off of other people?

Omar: That does come into it sometimes. I have a friend, Don E, who’s always playing guitar for me. There could be stuff that he's played, and then I'll get inspiration from that. It is always good to bounce ideas off [different] people. For the most part, though, I work solo, but you can use either skill of building songs.

The first thing I did when I knew about lockdown was I got some GoPro cameras and set up the studio so I could live stream, because that was going to be the only platform stage for us. I've only done three live shows with a band and an audience in the last seven months, so we’ve had to cut back. We’ve just got to adapt to survive, really.

Julia: When you're doing a live stream and you've got no audience in front of you, how do you think it affects the way you perform?

Omar: It doesn't. I'm just imagining that they were, you know, because you know when they say, 'Sing as if no-one's listening,' or, 'Dance as if no-one's watching'.

You've got to take people away from their problems and their troubles for however long you’re doing the performance for. I think I owe it to them to give them a good performance.

Julia: You’ve said before that you're not really big on listening to the radio or seeking inspiration from other musicians. Are there any sources of inspiration that you go to, or is everything just very organic?

Omar: It's very organic. I find that, if I make a compilation of tracks, then that seems to tell me that I'm ready to start putting something together myself. I've started doing that recently. I've discovered a bit of John Barry at the moment. I’m in love with his arrangements.

It might be the direction that I'll be going into, with a bit more orchestration. I used to do that before, when I used Chris Cameron to do arrangements for me on tracks like Music, and Last Request and Tell Me. I think I'm heading in that direction again this time, so watch this space.

Julia: Has having an MBE changed anything for you?

Omar: It’s nice to have that accolade, nice to be rewarded for your efforts, especially by the Royal Family. I was tickled pink with that, but no, on the ground, nothing has changed that much. I was hoping, if you have it on your credit card, like if they’re checking you into a hotel, then they'll upgrade you. It hasn't happened to me yet.

Julia: In terms of other accolades, with over three decades of experience in the industry now, what are you most proud of so far?

Omar: Lasting this long, for one, and coming out with the albums. I’m working on album nine at the minute.

Highlights would include working with Stevie Wonder, Erykah Badu, Common, Caron Wheeler. My story has been going quite steadily for the last 35, 36 years. I just want to keep adding to the catalogue. This is something that I'm known for, that I produce a lot of quality music, and I just want to be able to keep that flow going.

Julia: What would you say are the most positive shifts that have happened in the music industry since you started?

Omar: The internet, I think, has really helped in terms of creatives, because you can access the music directly, rather than having to go through big labels.

It enhances the music because people are just making music they want to make, as opposed to when the A&R guys who ran certain radio stations wanted certain DJs to play their stuff. It would have to sound a certain way to fit in with it, whereas I think, yes, it's a lot more free now. We’ve still got to sort out the Spotify thing and streaming. That's a bit of a grey area.

Julia: Are there any emerging artists you're excited about at the moment?

Omar: Joel Culpepper is a really exciting young singer; Ego Ella May. I’ve just produced something for her, as well.

Julia: You've dabbled in some acting in the past and composing music for theatre. Have you got any plans to do any more of that?

Omar: If it comes along, yes. I dust off my one-man play every now and again, so that crops up all over the place. I actually did it in the studio not that long ago.

Julia: Has your musical experience transferred into your acting?

Omar: It worked really well for me when I did The Javone Prince Show. It was on BBC Two and I was the Musical Director for the house band, so, obviously, that worked really in that sense. I’ve done various other things with people, they might reference my song, Nothing Like This, or I was playing like a producer in the studio. Obviously, those things can be coloured by the job I do.

Julia: Has COVID changed anything that you are particularly disappointed about?

Omar: I was supposed to be touring Brazil for the first time with my band. The States was going to be another tour, Ibiza, Greece, Spain, all over the show.

Julia: The album that you're working on at the moment - what stage are you at with it, and what is it sounding like?

Omar: It’s sounding like classic me, really. I'm working on string arrangements, horn arrangements as well. I like to keep it interesting. I'm working with several people on this one, but I'm not going to mention their names yet until these things [are finished.] If anything, [the pandemic] might have inspired some bits of it, as well. You’ll hear that in the lyrics, yes, when you get to hear the album.

Julia: I noticed you posted on social media on Black Out Tuesday. Do you have any thoughts on what the music industry should be doing to be more diverse and inclusive?

Omar: I think in terms of playlists and music, things change all the time. I'm hearing black music as much as – well, more than – I would have been hearing it on main stations say in the ‘80s, when I was growing up. [Back then] you had to listen to pirate stations to get to hear that kind of stuff, whereas now [you've got your] 1Xtras, your Capital XTRAs. They're becoming more mainstream, like iPlayer. Yes, it's all there for the taking. Things will improve, but I think we've come quite a long way.

Julia: Is there anything else you've got coming up that you're excited about?

Omar: I’m actually gigging at the Jazz Café in springtime. So I'm just looking forward to getting back out there.

Julia: It’s been really nice to talk to you, thanks Omar, looking forward to hearing the new album.

Omar: Thank you very much, you too. You take care.