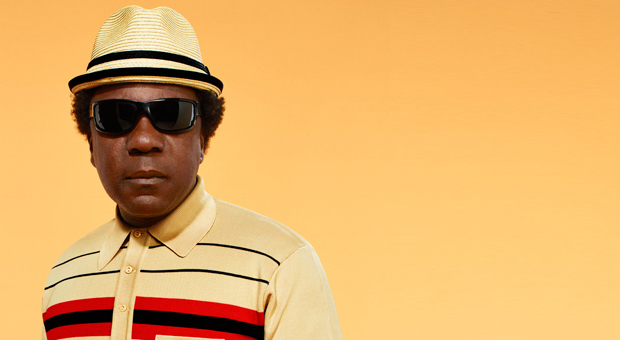 He’s right - there are a very DJs who can lay claim to enjoying a career which has sustained itself through every incarnation of dance music as know it. From Northern Soul all the way to the contemporary styles of dubstep and drum and bass, Norman has thrived among it all.

Born in Notting Hill, he is known for beginning his DJing career on Kiss FM, helping set up the then pirate radio station and kick starting the careers of many of his contemporaries. Since then Norman’s name and music is associated with the Notting Hill Carnival and his Good Times bus. It’s always a road block but this year, due to the development of their usual area, the Good Times crew have been forced to up sticks and head to St John’s in Hackney to provide their fix of musical sunshine. We caught up with Norman ahead of the party (on Saturday 29 August) to talk records, radio and what’s next for Good Times…

I came from a happy, musical family. We had a piano and state of the art record player in the house, which my dad still has. I chose the record player over the instrument. From then on, my future was assured. I just naturally took to the record player and discovered I had a knack for making people dance. It’s what I’ve done ever since.

What were the records that first appealed to you?

I’m fortunate enough to have lived it all and to be still living it now.

Where did you first DJ?

I DJed for years without being paid. I spent more years being unfamous and not being paid than I have for being recognised for what I do. My first gig would have been around '78/79.

How did pirate radio shape you?

Pirate radio was great. There were a few people like me who were dissatisfied with what we were hearing on the radio, not hearing enough black music. Rather than sit back and moan we set about doing something about it. We set up our own pirate radio station called Kiss FM and the rest is history I guess. I have nothing to do with it now but in the beginning it was fantastic and a platform for many of my peer group DJs to make their mark - people like Jazzie B from Soul II Soul, Trevor Nelson, Judge Jules, Danny Rampling, Pete Tong, Tim Westwood - many of those guys are still around smashing it to this day. It was a great training school.

What’s the plan with the party at St John’s in Hackney?

It’s the first time in 30-odd years that we’re upping sticks and moving east. It’s not a decision we’ve taken lightly. If we could have stayed at carnival we would be there but there was physically nowhere for us to play. Until that’s resolved we’re wandering nomads - so the next best place is for us to bring carnival elements and the good times vibe to the centre of London club culture. Which is in East London in Hackney. It’s an amazing venue - we’re going to dress it as best we can and bring a version of the Good Times bus and wall in there - all the best elements from what we did on the streets.

How did you find the venue?


We’ve been scouting for the right venue for some time and this seemed like a natural fit. I can’t think of a better use to put a church to than hold a party in it. So we’re going to turn it into a good times cathedral of sound. I’m all about creating a future for ourselves.

What else is in store for Good Times?

We’ve got a compilation album, the first in three or four years, coming out in October with some choice rare reggae, Trojan tracks, mid-80s boogie - they’re drawn from the Good Times archives. It’s entry level feel-good music and the precursor to another comp next year.

What have been the best gigs of late?

Camp Bestival was amazing - I made my debut there earlier this year. Plus we’ve got Bestival on the Isle of Wight coming up. The weather has been shit this year but personally as a DJ it’s been great. Crowds have shown me a lot of love and it’s reciprocated.

Is London in good health for going out?

From ground level on the street, it’s never been healthier and expanding at a rate of knots. At the same time, there is a cloud of doom hanging over it with the powers that be regenerating and the big cities closing live venues and clubs. All that will do is make people find other ways to party. You’ll never stop the party.

What advice to do you have for new DJs?

Be patient as your time will come. Whenever you’re knocked back just remember that. Keep your eyes on the prize and you’ll be rewarded in the end.

Visit normanjaymbe.com for information and tickets.
Features
Back to top