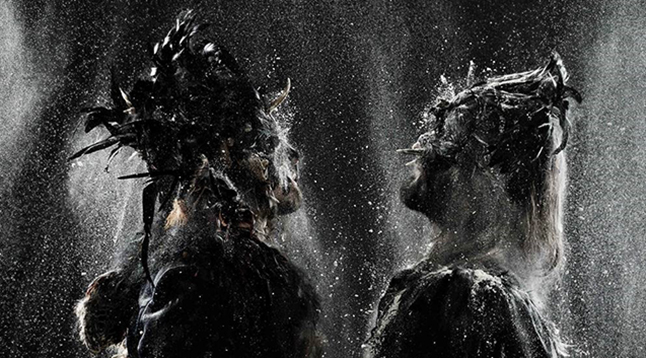 'The dark messages we spread through our music are a reflection of the world we live in,' say post-rock's eco crusaders

The aptly named Nordic Giants are titans of the UK’s post-rock movement, bringing an icy trace to their orchestral brutality and heavy bass.

On record, the duo’s instrumental sounds are bold and broody, while their live shows are visceral, demanding and all-consuming.

As much influenced by Mogwai as they are prog masters Pink Floyd and pop auteur Bjork, their music has a nuanced ruthlessness that hits you right between the ears.

But their monolithic wall of noise is more than just an aural adventure. Loki and Roka are bone fide eco warriors on a noble mission to spread the word and help save the planet.

Through regular hook-ups with thought leaders and climate crusaders, they bring a conscience to their unbridled creativity.

How best would you describe yourselves?
Nordic Giants is a medium in which messages can be shared, not by preaching or forcing people to listen, but by creating an experience for all the senses.

Music is a powerful weapon and it connects almost at a subconscious level, without any age or language barriers, social or political differences. Adding spoken or sung words translates its meaning and the purpose of the short films we use are to help draw even more emotion and emphasise these messages.

Who or what are you most inspired and influenced by?
Michal C Rupert who featured on Evolve or Perish has definitely opened our eyes to some of the world issues and his drive to make people aware is very inspiring. If you haven’t already, we would recommend watching the documentary Collapse, which is a great place to start.

Another person we’d like to mention is Manoj Bhargava, who’s really making huge advancements in free energy and much more. His film Billions in Change can be found free online and will hopefully help open your eyes to the problems and solutions of the world.

What do you hope your audiences take away from your live shows?
The issues and messages we spread, although often dark and violent are merely a reflection of the world we live in today. There are no themes, only truth and reality. We hope to awaken the human consciousness if only for a brief moment, to make people think but more importantly feel what is going on. If only one song, one film or one word connects and stays with a person, to help them to make any sort of positive change in their life, for others around them or for the planet as a whole, then the main message we would like them to leave with, the same message our tree logo stands for - hope.

Tell us about the creative process. What works best for you?
We have always thought that the best creative works have no real set structure, ideas tend to flow in many different forms and disrupting this can often be unnatural or over thought. Creatively, we really like working in this limitless way, experimenting as much as possible, not just with how we approach the structure of a song or what instruments are used, but also thinking far beyond this in terms of featured artists, guest performers, films, speeches or emotions. We have recorded in many different countries and different environments, whether a room full of people or the quietest of spaces, in the darkest of nights or the brightness days - these places and the people we have met have all influenced the music in some way, this works best for us.

Where do you get the ideas and concepts for your stage show?
Every year we try to create something different, something to push the boundaries of the technology we use, instruments or players we perform live with or ways in which we can make people think. For this tour we chose to focus on the most complicated known object in the known universe – the human brain - and specifically the levels of consciousness within it. We had messages of hope through to destruction; we touched on political and environmental issues.

What environmental message do you hope to get across to your audience?
The main message is always very simple – change is needed and the time to do so is now. So much damage has already been done and the growth of the human species and our energy consumption far outweigh our ambition as a planet to make the changes necessary for any long term impacts. Not enough people realise the colossal impact oil consumption has on the world. All plastic is oil; most paints; all pesticides are made from oil. Toothpaste and toothbrushes are made from oil. There are seven gallons of oil in every tire.

How does your anonymity help support the mysticism surrounding your music?
Nordic Giants was always intended to be symbol, not relying on a face to relay its message. It is in fact an ancient way of storytelling, using some of the older techniques like the masks, but brought up to date. We hope the main focus is about the art and the message, and not so much the people telling it. Hopefully when it is time for us to take off the masks, another two individuals will take our place...

If you could collaborate with anyone, who would it be?
Our next goal is to work closely with chosen directors and visionaries like Mischa Rozema and JP Frenay - people who are pushing the boundaries in visuals and storytelling, people who have the tools to help us get the message out, people who see things the way we do.

Nordic Giants’ debut album A Séance of Dark Delusions is out now. They’ll be hitting the road in February, supporting TesseracT.
Features
Back to top