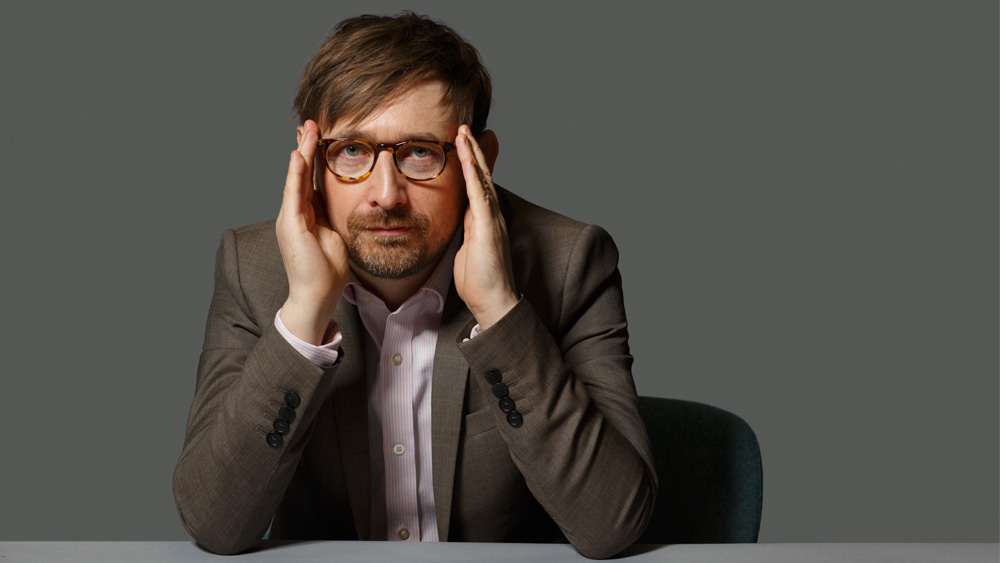 ‘The older I get the less willing I am to listen to reason because, as various people told me, there is no economic reason to make a double album these days,’ says Neil Hannon, while pondering his forthcoming album, Office Politics.

‘The older I get the less willing I am to listen to reason because, as various people told me, there is no economic reason to make a double album these days,’ says Neil Hannon, while pondering his forthcoming album, Office Politics.

The album will be The Divine Comedy’s 12th and comes as the chamber pop band celebrate 30 years in the game.

Although often referred to as a group, since its inception in 1989 The Divine Comedy has essentially always been Hannon and a rolling cast of musicians.

The Divine Comedy enjoyed its greatest commercial success during the mid to late nineties, with hits like Something for the Weekend and National Express catapulting them into the eye of the Britpop storm.

The enduring appeal of Hannon’s songwriting in the intervening years are in part due to his continued idiosyncratic, comedic view of the world, but also an increased tendency to allow more intimate explorations that were always apparent below the surface to come to the fore.

His latest collection is a loosely threaded concept album full of familiar characters and quotidian happenings butted up against the rise of machines.

Here, we chat to Hannon about his relationship to technology, his songwriting practices and his difficulties with collaboration…

What’s the thinking behind your forthcoming album Office Politics?
Quite a lot thinking really, years of thinking, and it’s a very long album so it covers a lot of ground. If I had to generalise wildly, I’d say it seems roughly to be centred around the world of work and how capitalism and technology influence ordinary people. And a few other things besides.

Why a double album at this point?
It was literally because I’d always wanted to make a double album. The older I get the less willing I am to listen to reason because, as various people told me, there is no economic reason to make a double album these days. It doesn’t sell you any more copies. With streaming you can have as short or as long a piece of music as you like, and the kids don’t even care about albums, let alone double albums. But you know, I was born in 1970 so a lot of the big albums when I was a kid were doubles and, basically, I’m still living in 1976 [laughs]. I wanted to make Out of the Blue.

The album as a format is increasingly coming into question, what’s your take on how technology has transformed music?
One has to be philosophical and say that the world changes, and we’ve seen a lot of changes in the last 10 – 15 years. There’s no reason why music shouldn’t be affected by that as much as anything else, but it’s certainly changed things out of all recognition.

The interesting thing of course is that it wasn’t really the old folks that brought vinyl back, it was the kids. They just thought, “hang on, these are pretty cool really. These are physical objects that you can have a relationship with, and you can look at this enormous artwork” [laughs]. You can revel in the whole package in a way that you can’t have that kind of a relationship with a name coming up on your phone. It also gives me license to go to town on the artwork.

You say the central character of the album are the machines, what is your relationship with technology?
Hmmm, middling to poor. Basically, everything I touch breaks instantly. And I’m not patient, you know, and I don’t want to learn how these things work. I never asked for them. It just seems like you can’t survive in the world without them. But then, it’s not just consigned to computers it’s also vacuum cleaners, I can’t work them either [laughs], and dishwashers, they all just break. Why? I mean I’m pretty sure these manufacturers could build machines that don’t break if they really put their mind to it.

You’ve mentioned there are synthesisers on this album, sonically how much of a departure is it?
Well, it’s not a great departure for me personally but it might feel like it to fans, or people who are used to my output over the years. I guess it’s not so much the synths as it’s generally got more of a late seventies, early eighties new wave kind of a feel. A bit of Elvis Costello and Ian Dury pub rock thrown in. It’s even got Steely Dan moments, and I am not ashamed of that.

But this is the music of my childhood really, so it’s quite nostalgic for me. People associate me with more orchestral sixties writing. And I adore it and I’ll probably go back to it. I needed a different vibe for this record really. The lyrics play with clichés. I don’t mind clichés, I’ve always found them very useful really, in terms of painting a picture of an environment. What I meant to say was that the styles on the album suit the lyrics really.

Do you know when a track is working during the songwriting process?
I rarely finish a song that I don’t think kind of works. That’s why in the past I’ve written thirteen tracks and twelve have gone on the album. People go, “what about B-sides?” but I don’t have any other songs! Basically, I have a sense very early on if something is worthwhile proceeding with.

But this time is slightly different because I wrote it all in a big splurge about 2012 – 2013 and I was trying not to make an album, in a way. I was just trying to make lots of music and experiment. It divided into two camps; one seemed relationship based and slightly more Divine Comedy sounding, and that became the last album Foreverland, and the rest of it was like this slightly socio-political synth nonsense [laughs]. I put that to one side and wondered about it for a few years, and this is the result really.

Do you have a very specific process?
It depends really where the idea has come from. Sometimes I have musical ideas, independent of lyrics, and they can come from different places. You can be just messing around with an instrument and find a good sound that might build into something else. And sometimes I just write things in my notebook, just phrases and couplets. With the song Norman and Norma, I just found Norman and Norma written in my notebook and I don’t know why I wrote them down or where I’d heard them from. I guess I just liked the alliteration.

Your writing is very observational, are you constantly gathering material in everyday life?
I’m always on the lookout, subconsciously, I think it is a subconscious thing. I’m not generally studying people’s squeezing of oranges in the supermarket and thinking, “Hmmm, what are their lives like?” [laughs]. But I think it all goes in. I think it’s why I’ve written quite a lot of songs about transport and businesspeople, because I fly a lot and I sit in airports, so that’s kind of the people you see. I feel bad about flying a lot, I must do it less if I can possibly avoid it.

What song are you proudest of?
That’s an interesting word. I’m proud of everything, but then you’re trying not to be too proud. I’m proud to have hopefully entertained people for 30 years, diverted them and made them think – I’m like the BBC of pop [laughs]. The individual songs? I ought to say something like Sunrise because I actually talked about the troubles without making myself vomit. That’s really hard. I hated the situation back then so much that I found it impossible to write about. So, that was a difficult thing to do and I’m proud that I achieved it reasonably well.

But then I’m very proud of The Lady of a Certain Age from Victory for the Comic Muse because it was a very big idea, basically telling, in reasonable detail, the story of this lady’s life. I knew from the first few lines that this was going to need three big verses to achieve. I kinda got to the end of it which I felt pretty good about [laughs].

How does it feel to be celebrating 30 years of The Divine Comedy?
It’s alright [laughs]. I simultaneously feel as fresh as a daisy and as old as the hills. To be honest I don’t think I approach what I do any differently from when I was 18. I’m just always pleasing myself, and enjoying myself, and setting myself little challenges, musically. I’m very lucky to have a job that I enjoy so much.

You’re involved with the forthcoming Father Ted musical; can you tell us more about that?
Okay, so Graham’s (Linehan) the boss and Arthur (Matthews) comes up with hilarious things from the corner and I try to keep people on message and try to write catchy tunes, and Paul Woodfull who’s also writing some music, other catchy tunes, and gradually the entourage is swelling as we get into workshops. So it’s all coming along. I think it’s going to be hugely entertaining; I really do. Hopefully, without being just a bit of superficial fluff though because we want it to be a genuinely good musical as well.

Has the experience been fun?
Well… yes [laughs]. Maybe I’m just not a natural collaborator. On the fourth version of the song for the same scene, I’m starting to get a little frayed round the edges, like, "for god's sake, what do you want from me?” But, you know, I like writing songs so it’s not a bad job for me.

Office Politics will be released via Divine Comedy Records on 7 June.