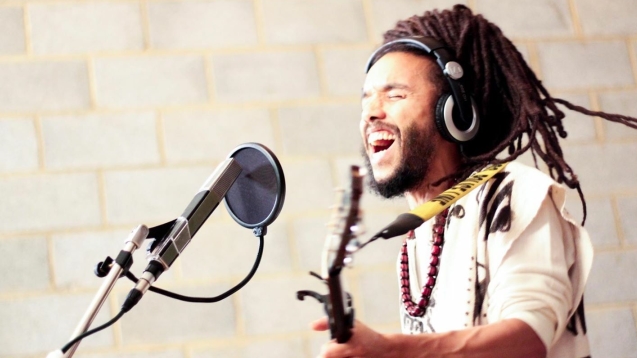 'First world problems ain't for me anymore' - Roots and reggae artist Natty on how his travels to Africa and South America have shaped his writing.

'First world problems ain't for me anymore' says Natty, describing how his various travels to Africa, South America and beyond have shaped his writing.

For the past few years, the roots and reggae artist has been visiting Rasta elders, Amazon shamans, African spiritual elders and sacred sites on a quest for personal enlightenment.

It's led to him getting involved with erasefoundation.org, building four schools and a children's orphanage, while his latest project invites eight participants to join him on a trip of a lifetime to the Amazon rainforest, where they'll seek to connect with the words 'Release the Fear' - also the title of his latest album.

Since making his mark on the UK scene in 2008 with his debut Man Like I, Natty has travelled across the world with his music, scoring a number one hit in Japan, collaborating with the likes of Nitin Sawhney, Roots Manuva and Akala, and touring with Ziggy Marley.

Blending African beats, analogue soundscapes and captivating melodies, Release The Fear is an autobiographical concept that he hopes will serve as a source of inspiration and strength to listeners.

Ahead of his upcoming UK tour, we chatted to the singer songwriter to find out more about his enlightening sound...

New album Release The Fear is a ‘self-produced labour of love’. What got you into producing, how did you learn the ropes?

I learnt from some of the best in the industry whilst working for sphere studios as a runner fresh outta school aged 18.

Everything. Hence the music I make is not one genre.

Was there a specific moment you decided to be a musician?

No, it naturally happened. I always wanted to be a producer. But when I was trying to get singers to get it right, they would simply say, ‘why don't you do it?’ So I did.

What was touring with Ziggy Marley like – did you take anything away from that experience?

New friends, an amazing experience and just how big and beautiful America actually is.

How do you think your sound is evolving?

If I wasn't evolving as a musician then that would mean not evolving as a man. Growth is natural. I trust my instincts a lot more these days... Self-confidence plays a big part in finishing what you started.

You’ve collaborated with many artists. Who else is on the wishlist?

How have your travels inspired your music?

Greatly. Travelling makes you more well-rounded as a human. Also teaches you to be more humble and better at problem solving (first world problems ain't for me anymore). And all of this makes my music that little bit more real.

What can you tell us about The Sacred Journey project?

Myself and my friend Nii are going to the Amazon jungle and taking a group of people from the UK to visit sacred sites, walk with the Shaman etc. We had to move it to January and so a couple had to drop out. If you want to take a look, check out Release the Fear: The Sacred Journey on Facebook.

What are you working on at the moment and what's coming up for you?

I'm working on music for release next year. Our charity has just sent three containers to Africa so managing that process as well. We have a UK tour coming up in November and I travel to Venezuela for The Sacred Journey with eight people. So yeah, lots going on. I give thanks!