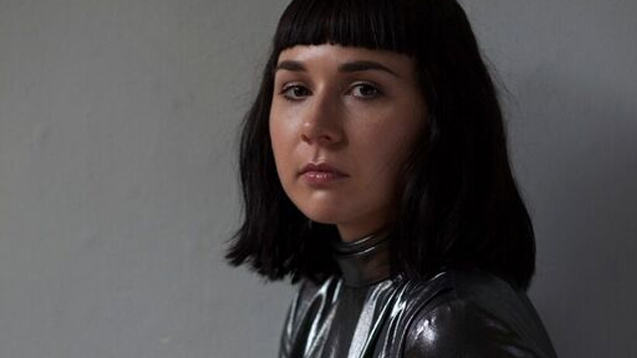 Natalie McCool is one of Liverpool’s brightest new pop hopes, a new artist doing her bit to re-affirm the city's reputation for electronics and melody.

Ever since she first emerged as a fresh faced LIPA graduate back in 2013, this musical talent has been on the up and up, impressing many of the industry’s finest with her raw ability to make intelligent pop music you can still move and sing along to.

Autumn time will see her back out on tour following the release of recent single Fortress and the subsequent unveiling of her next album. We quizzed Natalie about the new record and why creating the songs was like toying with an 'open wound'...

When I was very young my dad played blues guitar as a hobby so we always had a guitar poking out of every corner in our house. I remember there were about seven or eight guitars in the house at one time. I think I learned my first guitar song aged about six. My dad inspired my ear for the instrument a lot.

I was really into books and poetry in school as well as playing guitar and piano. I could never be a novelist but there was something about poems and songs that really attracted me. I love the fact that you can get a whole story, journey, series of events, tragedy into a couple of paragraphs of meter. Doing that became something really natural. In a way it's quite formulaic, it's so miniscule compared to a novel but I like the fact that it is short, it's a real art putting a story or emotion across in such a direct way.

When did you realise you were first onto something with your music?

To be honest there was no big break but a series of little ones. For successful artists or bands it feels like a constant upwards trajectory, and certainly that's how I feel. I don't think there is ever a time where people think 'I've made it' because the way the industry is at the moment there is a lot of very hard work going on behind the scenes that the public don't see. When I played my first gig at around 14 or 15 I felt like that was a huge step for me. So that's probably the biggest thing I remember happening!

I used to write songs on guitar which made the guitar almost like an accompanying instrument - with fingerpicking parts but still with really interesting voicing/tunings and with a lot of depth. I have kept that aspect for this album but made the guitar lines stand out a lot more, they are more like huge riffs and jagged hooks on the songs I have lined up for this album. I actually wrote most of the album on a synth bass, just to crack open the harmony space a little, and that gives room for melody and more expansive guitar parts.

You have a debut LP due to emerge later this year … what was the thinking behind the record?

Yes there is definitely a huge overarching theme on the record. The record is almost entirely about relationships and the bonds we make and break, how they work. There are songs about the feeling you have when you meet someone new, songs about the decay of a relationship, songs about what's left over at the end, songs about picking yourself up afterwards. In one way it's a huge open wound but writing and recording it was in fact a very cathartic process and I am so proud of it. Listening through it is like listening to the past two years of my life and all the emotions and personal experiences I went through with that.

Liverpool seems to be enjoying a bit of a moment music wise at the minute in terms of festivals, events and great new acts. Why do you think the city’s music scene is enjoying such a purple patch?

Liverpool has always enjoyed a moment of music! Maybe there's something in the water. I think the musical legacy of the city is something that contributes cumulatively to that, and I'm not just talking about The Beatles. It is a place people go to make music. I would go so far as to say it's actually made of music.

The city is well known for guitar bands - are there plenty of other more diverse acts coming through?

What are your top tips on news bands and artists succeeding - how can they stand out and make themselves heard?


Do something that's different. Don't try to be like someone else. Just do what you really want to do without worrying whether it's cool or not. Trust me it's cool.