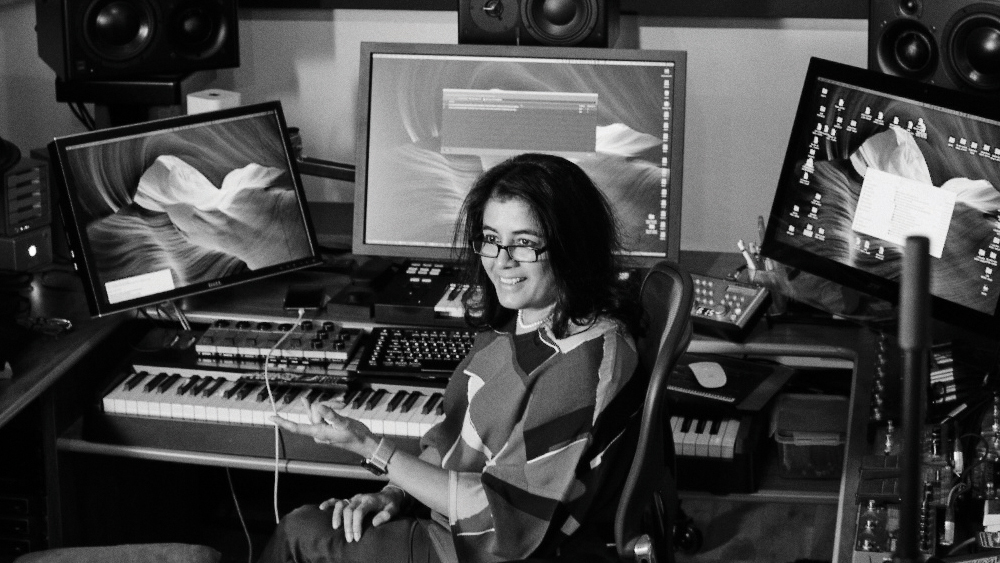 'You never stop learning about music. The moment you stagnate musically, for is a very dangerous thing. Your creative growth is very important,' says award-winning media composer Nainita Desai.

'You never stop learning about music. The moment you stagnate musically, for is a very dangerous thing. Your creative growth is very important,' says award-winning media composer Nainita Desai.

Her work traverses the worlds of television, film and gaming through mainstream scoring to more experimental sound design.

In the early stages of her career she worked with the director Werner Herzog, then secured a role at Peter Gabriel’s Real World Studios before making a name for herself initially for documentaries, and later feature films like the supernatural thriller Darkness Visible.

Maintaining a consistently fresh approach creatively, and an astute sense of the changing nature of the music business and technology, Nainita became  a BAFTA Breakthrough Brit in 2016.

Here Nainita talks M through the foundations of her career to her first big breaks and gives some insight on how to be a successful media composer...

You obtained a degree in maths before attending the National Film and Television school, what motivated that shift?

Music was my first love, always was since the age of five or six. I learnt various classical instruments like the sitar and the tabla when I was a teenager growing up, and at school I learnt the violin and self-taught on piano and guitar. A smorgasbord of instruments. At the age of ten I wanted to be a singer, I wanted to be Barbara Streisand, [laughs] but I suffered from stage fright, so music was my big passion, but I loved film as well.

I had a lot of cultural and personal pressures to get a stable job and to have a good education, so I ended up doing a degree in maths because I love numbers and the beauty of numbers.

After my degree I gave myself a five-year plan to make a go of it in the industry. I just love the marriage of music and film, they’re greater than the sum of their parts and it’s all about storytelling for me. I made a go of it.

When I was doing my post-grad, Peter Gabriel came to the studios. I was doing some MIDI programming and he said, “look me up when you finish your degree”. I was full of passion and enthusiasm and was bubbling with ideas, and they offered me the job of being Peter’s assistant, during the Real World recording week sessions, which were quite legendary sessions. I got to work with some of the world’s greatest producers and engineers, and world music musicians.

I became a BAFTA Breakthrough Brit about two years ago and that was a huge break for me in terms of breaking through from documentary into feature films, and drama and narrative. Since then, it put me on the radar of people in the industry, so that got me a lot of opportunities.

I got to work with BBC Symphony Orchestra of Wales last year on a big natural history feature film, and that was break for me in terms of working with a large-scale orchestra, which I’d never done before. That was just the most incredible experience.

That film was very successful in Romania, it’s called Untamed Romaina, and it’s about the natural history of Romaina, so it’s quite a spectacular, epic, visual film with large-scale symphonic music.

I’ve just found out a few days ago that I’ve been nominated for best film score for that for the Romanian film awards, the GOPO Awards, which is a big deal there. It’s like the UK Baftas or the American Oscars. It’s lovely to be acknowledged in that way.

You work across a range of styles; do you think that’s an essential skill for a modern composer?

Absolutely, for a media composer. I believe that my strength is in my diversity and versatility, in being able to turn my hands to lots of different projects. For me, lots of crumbs make a biscuit.

I know that a lot of people say you should specialise and get known for one thing, but my secret is that I have lots of different clients and film directors who think all I do is one particular style of music.

It’s so important to keep up with the latest technology and that’s really important for me. One thing I really believe in is trying to break down the barriers between creating music in an organic way and technology, because technology can get in the way a lot of the time.

You get bogged down in using the software, and the hardware. When you have a musical idea, I want to break down that barrier between the creative idea in the mind and getting it down in a tangible way.

You studied sitar, piano, guitar, tabla, and violin as a child how has this varied experience shaped your music?

Enormously, because it gave me an awareness of so many different genres of music, and musical cultures. World music is one of my foundations, and I use that by using instruments in a different way and taking them out of context. I loved film music as well.

Can you tell us a little about your company Soundology?

I sort of divide myself in two. Soundology is my mainstream TV company, and on my feature films and dramas I go under Nainita Desai.

In the UK when you cross between documentary and dramas, they don’t take you seriously. And in feature films and dramas you can’t do documentaries. So, it’s a way that helps me keep those worlds separate but still connected at the same time.

It’s a case of keeping up with the evolving trends of the industry and adapting to it.

Do you have any advice for young composers starting out in the world of film and television?

One of the things I always say when I’m talking to younger composers is to watch film and TV. I’m always amazed at how people talk about composers and musicians, and love music, but they don’t actually know anything, or watch any film and TV. That’s the best school.

My second tip is to not have a creative ego. The function, for me, is that I’m serving the story. Writing music for film and TV is all about storytelling and serving and interpreting the director’s vision.

A media composer’s job is to be a collaborator. You’re part of a team, you’re not an artist working on your own on your own music where you only have to please yourself.

You never stop learning about music. You may think, ‘I’ve got a degree in music, that’s it, I know everything there is to know about it.’ After 10, 20, 30 years, I’m still learning.

Lifelong learning. You never stop learning about music. The moment you stagnate musically, for is a very dangerous thing. Your creative growth is very important.

It’s very easy to get known for writing in a certain style. That’s something I’m always trying to avoid, to not be pigeonholed, or boxed into a style.

Working with broadcasters and film companies, when I first started out we used to own the publishing on all my music and that’s not the case now. You have to be creative in the way you do business in terms of budgets.

As for time schedules, because of the growth of technology over the last 15 – 20 years, everyone is aware that music is much easier to write and produce using technology. That is a great positive, but also a very dangerous thing for clients to expect music to be written by yesterday. Music begins to sound quite bland and homogenous when you have to write so fast.

I’m working on a big feature doc for the BFI, it’s called The Reason I Jump, it’s quite and experimental feature film based on a best seller book, written by a 13-year-old non-verbal autistic boy from Japan. So, that’s going to be very experimental musically. That’s really exciting me.

I’ve got a feature documentary that’s got its world premiere at SXSW in March, it’s called For Sama, and it’s about a female, Syrian camera woman who’s documented the last five years of her life in the Syrian civil war. So that’s quite powerful and very moving film.

The video game I’ve just finished, the interactive movie, it’s called Telling Lies, and that comes out in about June. The score was performed by the London Contemporary Orchestra – a really cool band to work with. They're all in very different place creatively.

I really believe the future of entertainment is moving towards a blur of film and gaming, and very sophisticated storytelling, interactive storytelling. We’ll be seeing a lot more of that.

Nainita's score for Untamed Romania is released on 26 April via Silva Screen.