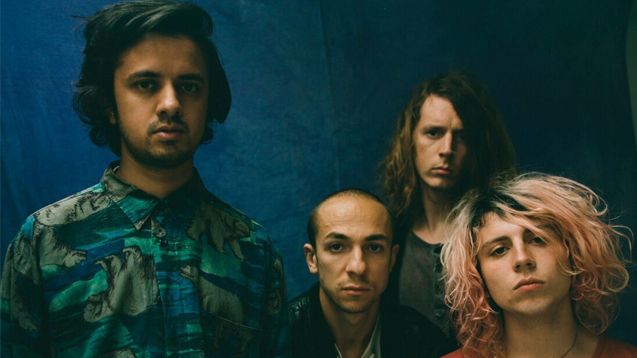 ‘The audience are the silent secret ingredient in the songwriting process’: Mystery Jets' Blaine Harrison on their Ivor nominated track Telomere and the making of the new album...

He’s chatting about how he put together the Ivor Novello Award-nominated track Telomere with his father, songwriter Henry Harrison.

It’s just been announced they’re in the running for the Best Song Musically and Lyrically category at the ceremony this May, and the pair are ecstatic.

We caught up with them to learn about the story behind the song, how their sound has changed in their 10-plus year career as a band, and what’s in store for the new Mystery Jets record…

Congratulations! How does it feel to be nominated for an Ivor Novello Award in the prestigious Best Song Musically and Lyrically category?
Blaine: It feels incredible to be nominated today. It came as a complete surprise a couple of weeks ago. When you’re writing a song, being rewarded in this way is probably the furthest thing from your mind. All you really care about is getting it out onto a piece of paper and into the world where it’s not your problem anymore. That’s what songwriting is. It can be this very lovely but also torturous process. Nothing quite matches the relief of releasing the record and putting it out there.

The audience are almost the silent secret ingredient to the process. That really is the greatest reward for us. Having said that, The Ivors has always felt like this pie in the sky, this sort of unattainable, incredible accolade that we would never in a million years expect to be following in the footsteps of.

Why do you think your track Telomere resonated so deeply?
Henry: I don’t know. In a way it’s very accessible but lyrically it’s slightly complex. And it’s written in an impressionistic way so I think that enables people to take out of it what they want. We’re not actually telling a narrative or explaining anything to people, just giving them an impression of something that we feel is quite important.

Blaine: When we started out, I was a huge Smiths fan and Morrissey very commonly writes from the third person perspective. The Mystery Jets sort of started off writing these narratives but as time’s gone on we’ve opened things up and realised that the more space you can allow in a song for people to create and project their own experiences the more rewarding it is because you’re not telling people how to feel or think, you’re just giving them a space where they can project however they’re feeling. I think that’s what music serves to me and my life when I listen to records. I’m not thinking about who wrote it or what they’re feeling, it’s a vessel for me to disappear into and seek whatever you’re seeking in it.

When you’re writing together have you ever wanted to write a line about each other and your relationship as a family?
Henry: I’ve wanted to write about Blaine a million times but he probably wouldn’t allow it so I’d have to sneak it in under the radar.

How will you celebrate your nomination?
Blaine: I would say we’re going to disappear to the pub round the corner but actually we’re writing a new record so we’re going back home to carry on writing this afternoon. We’re very much in the throes of making the next Mystery Jets record so that’s very much where we’re at. That’s why it’s quite nice to receive something back. It is a form of encouragement which you do need at a time when the music industry is in such a state of flux. The Ivors represents a tradition and it feels very reassuring to be a part of it.

How do you feel about the chart situation at the moment? Does streaming make it easier or harder for artists?
Henry: I think the usual suspects end up in the charts. But I’d say it’s harder now to get into music than it ever was. It’s quite easy to record songs and put them out on the internet so you can be heard easily. But for that to be translated into something where it could generate a real fan base I think it’s harder than ever and competition is enormous. I do feel for new bands who are struggling to get any kind of financial foothold because record companies are not able to encourage them in that way. It’s very difficult.

Recently lots of artists are going into legal battles with others who have released similar tracks. Is it harder or more worrying for you when you’re writing songs?
Henry: Luckily that’s never happened to us and we never overtly copy anything, not even a lyric or melody. We always start with a blank sheet of paper so I’d be shocked if someone said, ‘By the way, your song sounds like something else from 20 years ago’.

Blaine: At the same time though I think for my generation, generation Y, the MacBook has been an incredible tool for us. I’ve never been classically trained in any way but having a laptop has enabled me to find new openings into music and not being able to play an instrument hasn’t necessarily been a curse. It’s meant I’ve approached music more laterally. Sampling is a big part of that because kids have MacBooks, sitting in their bedrooms, and don’t necessarily have the musical vocabulary to put down chords - but they can find favourite parts of tracks. And that’s why sampling can be a very important part of the creative process. I will often start with a loop or some kind of seed taken from someone else’s record. You will get to the point where you have to find something else to replace it, which can be quite tricky.

Is there anyone else you’d like to collaborate with?
Blaine: I think the best collaborations are ones that spring up and out of circumstance. We’re always open to working with people. At the moment both myself and Will have been writing with other people on other artist’s records. It’s such an alchemic process, writing songs, that it’s not until you’re at the mixing stage that you know what’s going to be on your record. A lot of songs are just floating around in the ether. We’ve been working with some pop artists and new bands too.

You’ve been making music as the Mystery Jets for quite some time now. How has the band dynamic changed over time?
Blaine: The Jets has always been like a family, literally a family! We’re all very much like brothers and the key to keeping that relationship going is probably a bit like marriage - I mean, I’m not married so I don’t know. But listening to each other is why we’re still here doing what we’re doing.

Henry: I think also mutual respect. As Blaine grows as an artist, you’ve got to sharpen up your act. I work very hard to make sure I’m still relevant to what he’s doing. He stops me from using words that haven’t been around for 20 years!

Blaine: He’s the king of cross-referencing. I’ll say I’ve got this really great hook and he’ll disappear into the library and comes back with a stack of books. I love that – it’s so not a part of how my generation work. We use wiki or google. Whereas Henry will have a stack of literature to find these long syllabic words that I’d never dreamed would be part of my vocabulary and that’s fantastic.

What can we expect from the new record?
Henry: We’ve always had a policy of writing each album from a completely different place. They never sound the same and Curve of the Earth had a massive scope to it. We wouldn’t go there again, we think we’ve done that. This next album is very much grounded. It seems to be getting more and more fractious and divided so I think we’re going into that arena.

Blaine: I think Curve in a lot of ways, as much as it had this spacey imagery to it, it was a journey for us. It was us saying goodbye to the trials and tribulations of our twenties. I’m at the point now as a songwriter where I’m more fascinated at what’s going on outside my window, on a larger stage. Music should have the capacity to make you think as well as feel. It’s something the art world has never been afraid of, but as songwriters we often shy away slightly from what’s happening in the news. Not to say we’re making a politically orientated record, but we’re living in a very interesting time and it’s not the time to shy away from that as a songwriter.

Henry: The album before this was an Americana album, which we felt we wanted to embrace from the position of being English people who loved the American songwriting tradition. We’re very proud of what we did there and to come back and embrace our background was also something that had to happen. We said, ‘Right lets tear everything up and start with a blank sheet of paper’. I think Blaine has virtually been living at the edge of Trafalgar Square and going on every march every weekend and he’s saying, ‘This is it! This is what we’re writing about!’ Not just the marches but the actual conflicts of belief and perspective that everyone’s going through. It’s the feelings that lie behind all that activity that we’re trying to get into. We’re well into it and feeling very good about it.

2017 marks the 62nd year of The Ivors, the only UK industry awards ceremony to celebrate, honour and reward excellence in songwriting and composing. The awards have been supported by PRS For Music since 1974.