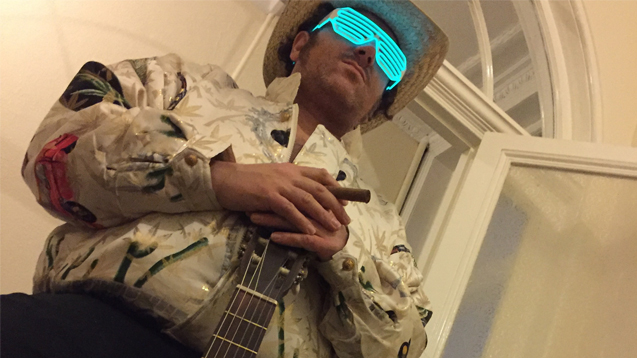 ‘Sleep with whoever needs it, get a second job and always keep your hair and teeth on point’ - eclectic eccentric Mutado Pintato on how to balance musical aliases and going interstellar in 2016…

Mutado Pintado isn’t scared of an alias or two or working across numerous disparate sonic projects.

This persona is just one guise for Craig Louis Higgins Jr, an artist who many may better known as frontman for deranged acid rave act, Paranoid London. He’s a busy musical character, recording solo, plus with Warmduscher, an offshoot of the Fat White Family’s extended family as well as fronting Save! with Colder’s Marc Nguyen Tan. Going even further back and Craig's first dalliances were fronting electro pop act Black Daniel.

With so many numerous musical plates spinning, we caught up with Mutado to trace his musical lineage and why his constant need for acceptance drives his musical mayhem…

I was born with a love of music. I was always obsessed with it, but I never imagined making it or being a part of the creative side. My family is pretty hard working and hard partying so there was always music playing but nobody played it themselves. My mother and her boyfriend at the time took me to see James Brown when I was around 11 and that sealed the deal for me. I knew I was going to be in music somehow but I just aspired to work at a label or something when I got old enough to leave home. That's what I did. I started working at a record label, Strictly Rhythm, got fired after four years, went a little crazy and made some weird music with friends as a joke - next thing I know I’m going around England fronting a band called Black Daniel. Now Quinn from Paranoid London records my nightmares.

Who or what inspired you to start writing your own music?

Just being in a band for six years made me want to get my own ideas down and do things how I heard it in my own kind of dissonant way. That’s pretty much it. I’ve always been someone that likes to do things by myself from start to finish and am not afraid to bang on doors for better or worse.

Black Daniel thanks to Luke and Liam May taking a chance with me. We had a publishing deal, big booking agency, toured with Kasabian and Bryan Adams, the works! It was great, but my personal big break was definitely with Quinn Whalley and Paranoid London. I owe pretty much all of what I’m doing now to them as they have allowed me, at least for the last few years, a platform and a way to make music rather than work a shitty job. I owe them dearly, as well as Bucks Music and now Domino Publishing.

How did you end up working with Paranoid London?

I have to thank my old friend Quinn Whalley and Gerardo Delgado for giving me a shot. I was on my way to work, (I also build sets for Ralph Lauren Window displays), and in between work I went to Quinn’s and just freestyled for an hour. That turned into Eating Glue. They needed an American accent and they had the cojones to not edit anything and just let it fly. The record blew up and they haven’t shut us down yet. I owe those guys so much. Amen!

What was the thinking behind the Mutado Pintado project?

Mutado Pintado was a way for me to just do things how I wanted to without thinking about anything other than making stuff I like. Now things are evolving and going well and I want to use it to work with as many people that inspire me as possible.

The idea of time and death makes me think how could you not want to do as much as possible before you pack it in? I am also an insomniac with borderline mental problems that has verbal diarrhea and the constant need of acceptance.

You also work with Warmduscher - what’s the aim with this project?

Pretty much to take it to the top, we have a ton to say and people are listening. It’s taking easy cheese for me personally when you are playing with the talent that make up this band. Lightnin’ Jack Everett, The Saulcano, Ben “Salt Fingers” Lovecraft, and The Witherer. We are recording our second album Whale City at the end of September with producer/genius Dan Carey and we cannot wait to get it out there. It’s definitely going to shake things up. We started off as a way to let off steam from other bands we are in and just play. Lightnin’ and Saul were in the Fat White Family, Ben is in Childhood and The Witherer and I in Paranoid London, but we have morphed into something really different. It's really exciting.

What have been your musical highlights in your career to date?

Throwing up on people with both Paranoid London and Warmduscher and constantly being rewarded for bad behaviour.

The ocean, the desert, the sun the moon, god and the devil.

First up, my scariest and most exciting thing is releasing a spoken word album sometime this year that I have done with Jonathan Dryden, I really love it.  Then … recording Whale City this month, a new Save! album, my second Mutado Pintado album which will be out with Paranoid London, the Paranoid London second album where I have a couple songs alongside Genesis P Orridge and Alan Vega! A tour of the US in October with Paranoid London, more Sworn Virgins releases and remixes and just going non stop till I drop!

Listen to the many sounds of Mutado Pintado via his SoundCloud profile...