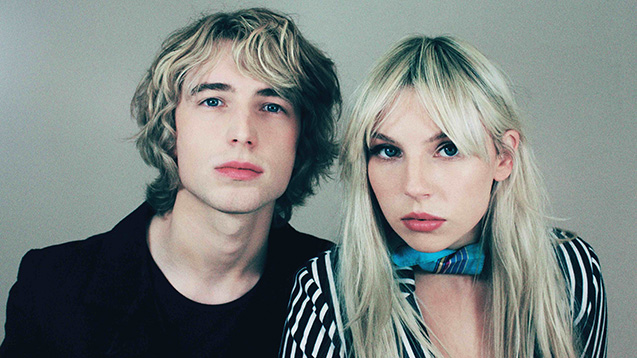 Sounding like the French nonchalance of Melody's Echo Chamber brewed up with jangly 90s modulations, MMODE's self-titled debut is one to fall in love with...

'It definitely brought feelings of doubt and at some points I really didn’t think I would be involved in music again,' says MMODE's Thomas Gaffney, talking about the short musical hiatus he and sister Lucy took after he became ill.

As folk-blues act Southern, the siblings were on the cusp of big success, signed to Marathon (Jagwar Ma, Childhood), touring with the likes of Bastille and Jake Bugg, and appearing in fashion shows for Burberry, YSL and Fred Perry.

Then, Thomas became ill and the duo packed up their new life in London to return home to Belfast for him to recuperate.

Thankfully, doubts were only fleeting about the future of their music. Setting up studio in the garage of their family home, the siblings traded bluesey folk for dreamy, psychedelic alt-pop and MMODE was born.

Theirs is a sound influenced by artists like Beck, Zero 7 and Portishead, with effortlessly blended vocals and an invitingly smooth texture that brings to mind the French nonchalance of Melody's Echo Chamber brewed up with jangly 90s modulations.

With their debut self-titled album due out on Friday (8 December) and the likes of BBC Radio 6 Music's Lauren Laverne already repping the MMODE love, this is one act to fall head over heels for before the year is out.

We caught up with Thomas to find out more...


How did the new album take shape?

After years of playing together with our old band Southern, we took some time out around two years ago and returned to Belfast so I could recover from ill health. I’d say around six months later I began writing again with Lucy and we decided to clear out our garage and convert it into a recording studio, so we could put down any ideas we had and really just have somewhere to hang out as well.

Starting a new band or recording an album was far from our minds at this point as I still wasn’t feeling great. It wasn’t until a few months later, the basis of one of our album tracks Sunrise In Belfast sparked the beginning of what was to be MMODE and the eventual finished album. This track was really the platform for the album.

The album came together quite naturally over the following months, during which we learned to record and mix. The rest of the record took shape quite quickly, due to us having some unused drum and bass stems from our previous band when we worked with Mark Rankin (Queens of The Stone Age, Iggy Pop, Adele). It was almost like collaborating with ourselves from the past.

How did being back in Belfast – and your general experience of band life in London – inspire the songs?

Being back in Belfast and completely left to our own devices was a hugely dynamic difference, not only with how it inspired us creatively but in our general way of life. We’d been living away from home for five years and completely dedicated ourselves to our music straight after leaving school. It was a much faster way of life in England, especially in London, so returning to Belfast was a great place to slow down and reflect.

Our outlook on everything seemed much clearer, so that really helped the final outcome of the album. Some of the songs were written while living in London and Liverpool, before we moved home to Belfast. When we revisited these songs, our sound had changed a lot so we had to re-record a lot of it, but were able to use parts of it as a platform to build from. It was quite a nostalgic experience whilst feeling very present and fresh at the same time. I don’t think we realised how much of an impact Belfast would have on us. Ironically it was the very place we were trying to run away from in our late teens.

What’s the music scene like in Belfast? Is it a supportive place for new bands to emerge?

I think Belfast makes a lot of effort to support the arts in general with local radio and, especially its government funded schemes, to allow artists to tour and record their music. We only launched MMODE a few months ago and can’t believe how supportive local stations and newspapers have been to us. It’s great to know that there’s a platform to start from here. Our local BBC Introducing platform (Across the Line) plays our music nearly every week and even got it played on BBC Radio 6 a couple of times too.

Joe Dougan at Shine Promotions has been a big support to us for years with local concerts. He has a lot of established bands coming through Belfast on tour and regularly gets local emerging bands from here to support and get them in front of a big audience. We recently played Culture Night in Belfast and were really impressed at the amount of local talent and the support the city gave to them all including us.

There’s also a great festival in Belfast that’s connected to Nashville called the Belfast Nashville Festival which runs every year in February. They’ve been supporting local talent for years now and actually gave Lucy and I our first gig in 2009 supporting Raul Malo from The Mavericks.

The Oh Yeah Centre is a great place too, including Start Together Studios run by Rock O’Reilly, where we’ve been recording a lot recently. Niall Doran, the in-house engineer there, has been staying into the very late hours with us to make sure we get what we need. What a great bunch of passionate music people.

Were there ever moments of doubt about starting a project from scratch?

I think at the time we knew it was the right thing for us, and for me especially needing to recuperate. The fast-paced life in London and our hectic lifestyle on the road towards the end wasn’t the best for my health but also wasn’t good for our creativity either. Being home in Belfast slowed the pace for us a bit. The change of scene and our short break from all things musical definitely brought feelings of doubt and at some points I really didn’t think I would be involved in music again. I even thought about going back to university but before too long we were in the home studio writing and recording.

Building the studio was a turning point. Of course there were days when it was a struggle but the overall creative control and freedom was so new and thrilling and we found ourselves engrossed in the music again. It was incredibly fulfilling to finish the album.

As siblings, did it come naturally for the two of you to collaborate together?

I’d always just played guitar and piano from an early age but one day I was singing Radiohead’s High and Dry and I realised I could sing quite well because I could hit the high notes in the chorus. I wanted to perform somewhere so I started going busking on Fountain Street in Belfast outside the Linen Hall library one summer. I was busking one day and a woman suggested me to enter the city’s first busking competition which I ended up winning. The prize was some recording time and a slot in the Belfast Nashville Festival.

During the recording session, Lucy came along with me for company and as we were listening back to the mixes, she started harmonising in perfect pitch and I was like ‘get in there and put that down!’ We went on to duet at the Belfast Nashville festival and haven’t really looked backed since.

What are you obsessed with right now?

We’re both eating a lot of strawberry jam on toast weirdly... With music, I’m listening to the Cocteau Twins an unhealthy amount and Lucy’s got Devendra Banhart’s last album Ape In Pink Marble on repeat.

How do you think your sound has evolved since Southern? Is there anything different you're doing now to when you first started?

Yeah a lot has changed! Lucy is mainly singing the lead vocals now which is probably the biggest difference but also the production style, guitar style, genres, the music we’re listening to and the musicians we’re surrounded by. Our musicians we currently play with are all jazz guys, so our rehearsals always end up being 30 minute jams of one song but we can’t stop because something magic happens every time. This is probably the most exciting thing to come when we begin touring!

What artists do you look to when setting the bar for your own success?

Portishead, Radiohead, The Velvet Underground, Gorillaz, Brian Eno, Spacemen 3, Slowdive, Beck, Lou Reed... the list could go on for a while.

What are your goals for the next year?

To record our second album and hit the road a lot! We’ll be booking our tours beginning of next year. For the moment we’re practising the album with our band.