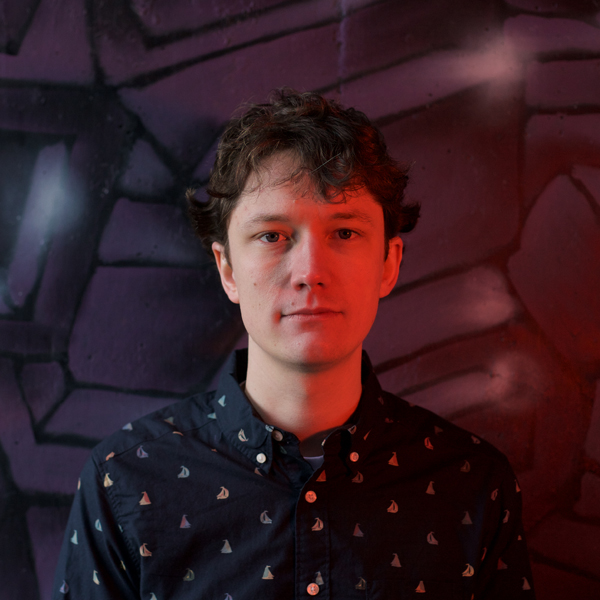 If you thought the world of electronic pop was looking a bit dull, then you’ll need to think again with the return of Glasgow producer Miaoux Miaoux.

The music maker, aka Julian Corrie, is reanimating this ever-shifting genre with his latest LP School of Velocity. The follow up to his Scottish Album of the Year Award nominated Light of the North and out again via his home city’s Chemikal Underground label, the record is a colourful collection of exuberant electronics, club ready but all underpinned by a deft songwriting touch.

Alongside this latest LP, remixes for CHVRCHES and Belle and Sebastian, he's also fronting a top live band and is taking the album out on tour. We caught up with Julian between gigs to find out why finishing music is his toughest creative challenge…

I’ve always been involved with it. My dad is a musician and used to play a lot of classical music. I’ve got an older brother and sister and they used to play me eighties and nineties pop. Belinda Carlisle’s Heaven Is A Place On Earth is one of the first songs I remember hearing. I just totally loved it.

I learned piano because of my dad, got into hip hop and drum’n’bass at school, then more electronic stuff at university. Curiosity is a good word to describe it. I’ve always been interested in different sounds. I’m trying to work in a lot of music I like into my own songs without it sounding too contrived. I’m fighting a losing battle in a way as it means the records can be a bit all over the place. But I like that. If you make a mixtape for somebody, it can go everywhere and still work.

Which artists do you look to for inspiration?

I always bring up Caribou. He’s an inspirational guy as he’s been so consistent over six or seven albums. Every record has been really good, plus he’s got the Daphni techno side project. He’s a solo artist with a live band which is kind of what I’m doing - when we play live there are three of us. That consistency is very inspirational. Caribou is someone who’s made great music for ages and is just getting recognised for it now. I really appreciate that. He’s a great producer.

For me songwriting is really important - a good melody and topline is really key. Every time I write, I’m trying to make that work. But then also do something unexpected.

Do you have a songwriting method?

People with methods are really efficient but unfortunately I don’t have one. Every time I’ve tidied my studio and put everything in the right pace, I’ve ended up being really uninspired. Every time I do something good, the place is an absolute tip with stuff everywhere. Music seems to land from outer space really. I never set out to make a certain thing.

Do you enjoy working on your own?

I’ve been in bands before where the creative drive comes from different directions. It sometimes works really well but can be confusing. No one really knows who’s in charge, everyone is trying to be overly nice to each other. I’m not saying I’m not nice, but for me it works well when I just bring material to people and show them the part.

In terms of production, something I need to learn is to probably stop throwing everything at it. I need to understand I don’t have to do that. For example, James Blake and his music is beautifully made with only three or four things going on. At the same time, I really enjoy chucking stuff at a track. I’ve started writing the next album and exercising more restraint.

Have you been surprised by the reaction to this new album?

I’m just really pleased, plus a little bit relieved. When you work on your own, you don’t have a sounding board to bounce off. I’ve got the band but they don’t hear stuff until pretty late in the day. I was sticking my neck out with some of this new music but I really felt it was good and wanted to do it. It’s really satisfying for other people to respond to it positively. It makes you feel like you’re not totally on another planet.

How did you end up with Chemikal Underground?

They came to a show I did in Glasgow. I met Stuart (Henderson, Chemikal’s head honcho) and he asked me if we wanted to work together. I was really struggling to get that record Light of the North done at the time. They offered to press the record, give me some studio time with Paul Savage and help mix it. They work really hard on my behalf although I don’t fit with the likes of Mogwai or Arab Strap. They’ve got a history of releasing dark music and my record couldn’t be further from that. It’s full on, vibrant pop.


I don’t want to live it for so long between records this time. It almost feels like I’m starting again with this one. The last record was well received but I didn’t really build on it. I’m lucky enough to have come up with some stuff already using Ableton Live. Before I was pretty much made on hardware on drum machines and analogue synths. Which is great but time consuming to do. I’m just getting some demos together, then off the back of that I’m going to take them and do more work.

Any advice for new producers?

I’d say make sure you finish your music - that’s the biggest thing. A lot of people who start making music on computers get loads of software plug ins but don’t finish stuff. Complete your music and limit yourself to a small palette. Then try and get the most out of that.

School of Velocity is out now on Chemikal Underground Records.