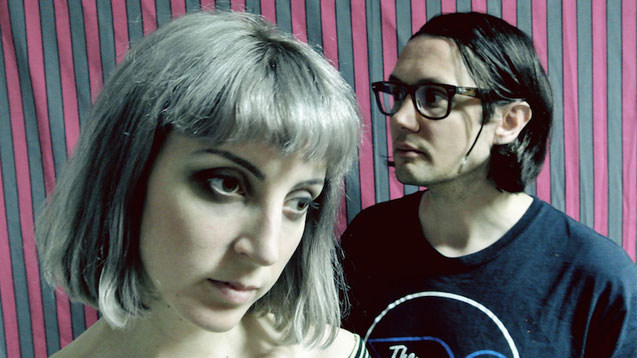 'Be stubborn and vague, and don’t pay attention to what anyone else is doing': Menace Beach's Ryan Needham on the band's sonic recipe and how they cooked up their ace new LP.

Now onto album number three – the soon-to-be-released Black Rainbow Sound – Liza and Ryan have veered away from the raggedy psych that defined their previous releases.

Swapping out just guitars-bass-drums for an excursion into technicolour no-wave, they’ve stumbled into an analogue synth nirvana that’s drenched in celestial conversations, oblique pop and a customary touch of the night terrors.

Along with Matt ‘MJ’ Johnson of Hookworms, Rob Lee (Pulled Apart by Horses), Nestor Matthews (Sky Larkin) and Matt Spalding (You Animals), they crafted the record at their local Nave studio with producer Matt Peel (Eagulls).

Never ones to shy away from an intriguing collaboration, Black Rainbow Sound also contains songs featuring Brix Smith of The Fall, and Brix & The Extricated.

We get the skinny on the new sound from Ryan…

The title came from an old therapy technique about imagining your emotions as colours. I just thought it was interesting to think of all these different blasts of colour attempting to destroy some of the darkness that we hang onto in our lives. For me it definitely stuck around as a solid strand to keep checking in with as we were writing and recording.

How has your sound evolved over your three albums?

The first music we wrote was more derivative of our influences at the time but that’s pretty normal. We jumped off from there and now just keep breaking the formula, breaking the process, keeping the things we think are good about the last stuff we did and incorporating our changing tastes. It has to be exciting and feel uncertain I think, and sometimes it connects, sometimes it doesn’t, but as long as we keep getting some kind of fulfilment from it then it’s all good.

You’ve been using more and more synth sounds and drum machines – what’s the lure for you?

Again, that’s part of breaking the formula and process, though Liza has been playing and building analogue synths for a long time so it doesn’t really seem new to her. But I’m fascinated by it, it was just total unknown territory for me at the time, really unreal.

How did you come to work with Brix Smith and what did she bring to it?

She played a song from our last record on her BBC Radio 6Music show and was really into it. We said thanks on Twitter and then Liza started chatting and it went from there. We’ve collaborated with various people from the start of the band. We’ve become a lot more strong-willed about what we eventually release but I think it’s really good to throw some curveballs in there and keep learning from people.

How and where did the record come together?

We only did one big UK tour for the last album, so we had a lot of time to get stuck into writing over summer last year, and then we went in to The Nave studio up here in Leeds with Matt Peel just before Christmas. A lot of the initial writing was pretty loose and free; me and Liza recording basic ideas or sounds down and then leaving it for other to finish off and mess with, then as they started to take more shape we’d argue ideas out a bit more.

How did Eagull’s Matt Peel help shape the sound?

Matt is amazing because you never really notice him doing anything. He’s running the desk and running the tape machines and tweaking all the outboard gear all the time but I can’t think of a single time he had his back to us or wasn’t paying attention or not fully engaged and contributing to the discussions that were being had in the room, and that’s an incredible skill to have.

We approached the recording process much more loosely than we ever have; there was structure and songs there but there was also a lot to play for when we started pulling it all apart. It must take a lot of patience to record that, because we’re equally both vague and stubborn.

How are you going to interpret the LP for the tour?

We’re figuring that out now. We’re just going to all be playing more synths and less guitars, bit of stuff on samplers, Nestor has some drum machine pads. It’s sounding good. The hardest bit is actually going to be figuring out how to fit some of the older songs in with the new set up. I can’t decide whether its crap to rework them to fit more with the new record or just play them as they are.

After this new album stuff is done Liza’s going to be working on a horror film soundtrack, I dunno when that will be though. It’s obvious to say but plans around album releases are so up in the air because the reaction to the record can totally influence what we may or may not be up to for the next six months. Either way something interesting usually pops up.

Just to be stubborn and vague and don’t pay attention to what anyone else is doing.

From Leeds, Drahla, Team Picture, Magick Mountain and Cruel World. The Hookworms record was amazing. I’ve been playing the new Melody’s Echo Chamber a lot, I really like that.