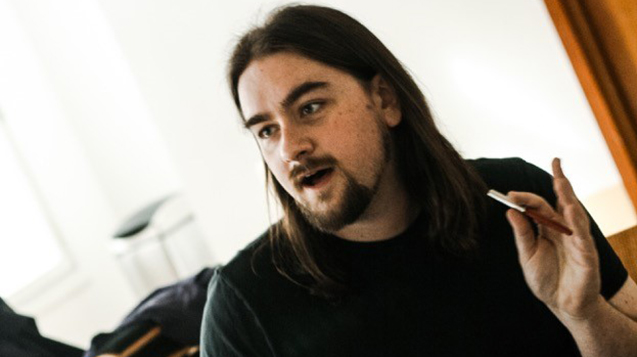 Matthew Whiteside is a cerebral composer and sound designer who’s creating classical-crossover works to challenge the 21st century consensus. We learn more about his broad creative brush and his most recent work with flautist Carla Rees…

His wide use of sonic technologies have seen him break new ground in electroacoustic composition, spurred on by his Glasgow-based ensemble Edit-Point, which interprets his music for tape, instruments and live electronics.

Matthew also collaborates widely across disciplines. Earlier this year he was co-commissioned by Sound Festival and R-Space gallery to collaborate with visual artist Dominika Mayovich to create a sound/art interactive installation.

Their ground-breaking suite of six works, Two Worlds Collide, was first shown at R-Space in Northern Ireland before receiving its Scottish premiere in Aberdeen last month.

In addition, Matthew scores for film and television, and his orchestral and ensemble works have been performed across the world including Dublin’s National Concert Hall, Glasgow City Halls, Salem Artworks in New York and the Belfast International Festival at Queen’s.

You work across film, concerts, sonic installations and many other genres. Where do you feel most comfortable?
I’m most comfortable while writing concert music but it’s fun bringing ideas and ways of working from the different sides of my practice and letting the boundaries blur as much as possible. At the end of the day, it’s all planned vibrations in air to create an emotional effect. If that emotional effect is to support a film or stand on its own in a concert or gallery it doesn’t matter, it’s all music.


How does your approach to each differ?
Ultimately with concert music its up to me to write a piece that stands on its own terms, there is input from players but a different kind of input than working with a director or an artist. I try as much as possible to work with players so I can make sure its practical for the instruments and ensure anything made for the piece actually works.

Sometimes when working on a piece, the player will suggest something they would like to do. For example when writing the Three Pieces for Bass Clarinet and Electronics, Joanna Nicholson mentioned she was interested in exploring multiphonics, so one of the pieces was written to be very multiphonic heavy.

With the installations the idea is a bit more collaborative. When working on When Two Worlds Collide with Dominika Mayovich, we talked about the subjects for the paintings and how the sound would work before starting to make anything. These conversations informed the sound design and music I composed. Once I had started creating the music and sound design Dominika listened to both which then informed her sketches and paintings that then fed back into my work. This cycle continued until everything was finished with both of us commenting on each other’s work throughout the process.

For film music, it’s still collaborative but the music is there to support what’s happening on screen. I have asked a director to change the edit in a scene by a few seconds to match what I’d set up musically and they obliged. However I realised it was ultimately their call, if he had turned round and said ‘no’ I would have had to make the music work with the original cut.

Where does your interest in electronics originate?
I’ve always enjoyed tinkering with electronics. I built most of my own computers until I had to move over to Macs because of the software I needed for music. The main lightbulb moment happened when I was only a week or so into my first year at Queen’s University Belfast and I heard a concert of electroacoustic music. I was captivated by the sounds and wanted to know how to create music like that. It wasn’t until my Masters at the Royal Conservatoire of Scotland that I wrote my first piece using live electronics called Dichroic Light for cello and electronics. It was a massive learning curve but since then about 50 percent of my output has involved electronics in some way.

You like to integrate your electronics with acoustic players and instruments, such as your most recent work with flautist Carla Rees – what appeals to you about doing this?
I’m drawn to it because its sounds really cool. I like playing around with sounds and I use electronics to create sounds that are impossible for players to do, but importantly would be impossible without the player. For example, one of the parts within the piece I’m working on for Carla will have a huge deep drone that is taken from a tongue-ram on the contra. Carla will be playing fast dynamic material which the computer will listen to and use to tweak the volume or transpose the drone just a little to make it feel alive. It means the electronics are influenced by Carla’s performance in the same way an acoustic player would change their performance based on the other players.

How do you go about it?
It depends on the piece and what the concept behind it is. One of the driving features of the way I think about electronics is designing them to be as autonomous as possible.

For Solo for Viola D’amore and Electronics Emma Lloyd (emmajanelloyd.com) and I designed a glove that senses the pressure Emma exerts on the fingerboard with her first finger and that controls the electronics (in this piece ring modulation but can be used to control whatever I want). This meant that she can expressively control the electronics in the same was as vibrato and dynamics.

Your debut record was out earlier this year – can you tell us about the process behind it? What was the inspiration and how did it come together?
Solo for Viola D’amore and Electronics was written specifically for the album. It was a piece Emma and I had talked about working on a few years ago. After a performance of Ulation we were sitting in the pub and somehow the conversation moved to the viola d’amore. She wanted to play it and I wanted to write a piece for it and so the project was born and, with a little help from Creative Scotland, we were able to make it happen. I also felt like it was the right time to record a selection of my music.

On one hand the album could be described as a ‘best of Matthew Whiteside’ but I think it is more than that. The initial inspiration for the album was not just to create good recordings of my music but also to curate the pieces that fitted together, in the same way I’d programme a concert, in order to create an album rather than just a best of.

It was really nice to be able to ask the ensembles who have performed my music and, in most cases, premiered the piece to record it for the album like Emma Lloyd, Joanna Nicholson, Red Note and the Robinson Panoramic Quartet (http://malachyrobinson.com/robinson-panoramic-quartet/).

How important is the recording space to your sound?
When I was talking to Timothy Cooper, who engineered, mixed, mastered and co-produced the album, about what I was looking for we decided to record in a church. I think my music benefits from a slightly more resonant space and using a church worked really well.

What’s the impetus behind Edit-Point?
Edit-Point was set up by Timothy Cooper and I while we were both students. It performs electroacoustic music (both fixed media and instrument plus electronics) with the aim of taking that genre of music out of academia and into the concert hall on a more regular basis. We both feel that electroacoustic music is largely tied up with education institutions, this keeps it tucked away from the general concert going audience.

Do you think it challenges common perceptions of a live concert performance? If so, how?
Yes it definitely does. In a normal concert you have performers sitting on stage. In our concerts often the performer is sitting behind a mixing desk in the middle of the room. This changes two things. Firstly, there is nothing visually interesting for the audience to look at which, in our visually overloaded world, is quite a change to peoples’ experience. Secondly, the performers’ physicality isn’t as present as a signifier of certain things, for example ‘this piece has ended’.

It can be challenging for people to come along at first but once what is happening has been explained they quickly become comfortable and come back for more.

How has your classical training informed your overall sound?
My musical upbringing was a mix of classical music, going to the opera and ballet but also listening to Vangelis, Metallica and Nine Inch Nails. It’s as if classical music is the language I’ve chosen to distill all my influences into. Initially it was a subconscious thing but now I’ve started to play with it a little more consciously. I think this background also plays a large part in my interest in electronics as well.

Can you tell us about your installation with artist Dominika Mayovich?
The installation is made up of six paintings housed within individual pods each with motion sensitive sound design accompanied by Exhibition Music (http://www.matthewwhiteside.co.uk/?page_id=1386). The paintings are essentially two triptychs all broadly exploring the subject of loss. We have intentionally left the paintings untitled with no descriptions so people can view them within their own context and baggage rather than ours.

How can audiences interact with it?
When someone walks into the room first they just hear the music on a loop but when they stand in front of a painting they trigger the sound design. Then by moving closer to the painting the audience can change the sound design that is being played. For example as you get closer to one of the paintings the voice that is being played becomes clearer and when you are standing centimeters away from the painting it’s a clear whisper in your ear.

What were the main challenges to this and how did you adapt and bring to life your ideas?
Mainly logistical and technological - making sure the motion sensors work and do what I need them to do reliably so that I can leave it in a gallery and all that needs to be done in the morning is turn it on. Logistically it was about adapting the pods to make sure they fitted in the space we had while maintaining the feel Dominika and I were after.

What’s next for you?
The main thing I’m working on at the moment is the piece for contra-bass flute and electronics for Carla Rees. I’ve been asked to write a piece for three ensembles for the opening night of Cottier’s Chamber Project in 2016.

Also, I’m hoping to start a classical music night in a club in Glasgow in February. It’s not confirmed yet but I’ll know if it will be going ahead in the next few weeks. I’ve got Red Note, Joanna Nicholson and the Aurea Quartet to play the first three concerts.