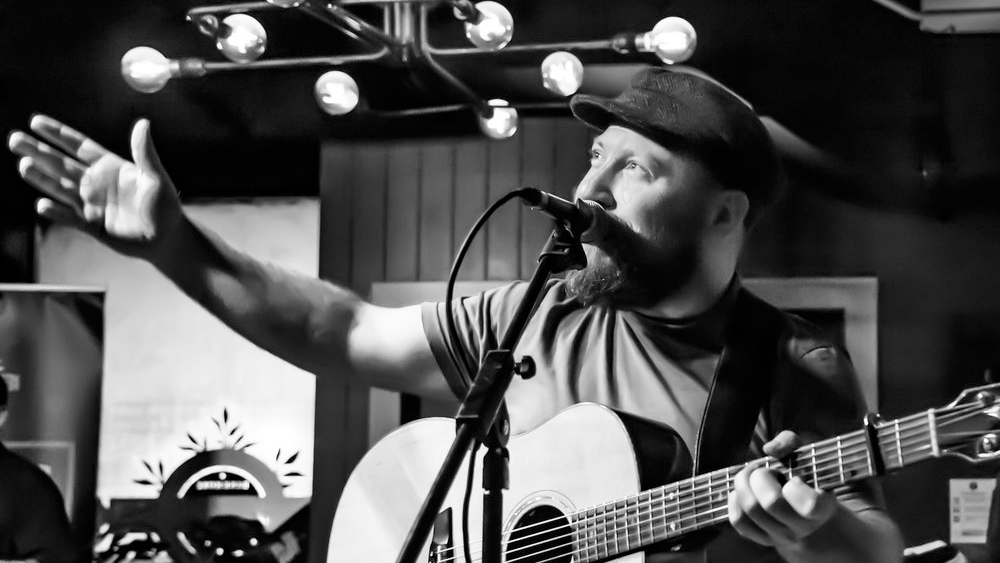 ‘Don't let one go. Sometimes a song can be coming through at the worst possible time, it doesn't matter, drop everything. It could be an absolute gem': Irish singer-songwriter Matt McGuinn shares his songwriting tips.

‘Don't let one go. Sometimes a song can be coming through at the worst possible time, it doesn't matter, drop everything. It could be an absolute gem,’ says Irish singer-songwriter Matt McGuinn.

The Co. Down musician is set to release his fourth record Lessons of War in February 2020.

The first taste of the album came in the form of the single Bubblegum, which features Portadown singer Ciara O’Neill.

The song was inspired by the teenage diaries of Bronagh McAtasney, which were written throughout the troubles in the 1980s.

On Lessons of War he has collaborated with musicians from war torn areas across the globe for a collection of songs that explores the futility of war.

Alongside his music Matt has also recently launched a podcast series where he travels the length and breadth of Ireland and chats to musicians and artists.

Can you start by telling us a bit about your podcast and why you decided to launch it?

For so many reasons. I do a lot of driving, and as a result have really gotten into podcasts this last year or so. I love the fact that I can get lost in perhaps a two-hour conversation about a subject that I'm passionate about, just as easily as something that I have no clue of.

But there was always a voice that was missing, the Irish, and especially Northern Irish artists. We have our big names from this neck of the woods, Van Morrison, Gary Lightbody etc. but there is such an untapped wealth of songwriters here, it's quite remarkable. Because we don't have the same industry support as across the water, and even in the south, I believe that artists here know that they have to constantly punch above their weight, and as a result are putting out some serious quality material.

So, for one reason, I wanted to highlight them, but to tell you the truth, the writing studio can be a lonely place. It's a lovely excuse to get out and chat to like-minded people, be it old friends or new.

What kind of things do you tend to take into consideration when choosing a guest?

When I first came up with the idea I immediately had around twenty names in my head that I will have to cover at some stage, some are very talented and hard-working friends, others are artists that I've crossed paths with several times and maybe never had a chance to sit down and have the craic.

As a father of three, it can also just be down to how the stars happen to align in me having a window of opportunity and someone else having that free space. Like the other day, Jarrod Dickenson was in town. He's a class Texan songwriter, living in Nashville, who's second home is here as a result of him marrying a Belfast lady. It was great to catch up and it's a lovely interview going out next month.

You travel the length and breadth of Ireland speaking to songwriters: musically, what are the biggest differences you notice when you travel across the country?

I think that the further south you go, there has been a strong musical and cultural confidence for a number of years. But something is happening right now in the north. Young artists are realising just how good they are and have developed a contagious no fear approach in self-expression.

On a whole I'd say I'm amazed more at the similarities than the differences. The whole of Ireland has always been a serious musical melting pot with incredible diversity for such a small place. But I meet artists like myself who are fighting every day to be heard in a world where everything is shrinking around them with everything from cuts to the arts to the whole industry folding in on itself. And yet with all that, there's something in every one of us that can't stop the creative spark, and instead jump onto an easier career path that's a little more financially secure, and less stressful.

What has your podcast highlight been so far?

Having serious craic with Ursula Burns in episode two. The girl is incredible, and quite an inspiration. I couldn't stop smiling for days. I met her in her beautiful workspace, overlooking the two famous yellow Belfast H&W cranes. It's an empty building recently reclaimed by local artists that make great use of it whilst it's dormant. That's why I called the podcast 'See you at Yours'. I knew if I got into the habit of doing interviews over Skype, I would miss out on the experience of being in the artists home turf. Plus, I find it’s a far more relaxing and open experience for them too.

Why do you think it’s important to give songwriters a platform to discuss their work?

I think that here we have some of the best songwriters in the world, and a lot of others with serious potential. Unfortunately, most of them carry a lot of humbleness and humility. They are traits that are great for songwriting, as they are often followed by empathy and sympathy; basically songs full of heart. But humbleness can work against you when it comes to selling yourself as great to other people.

Plus, I really think that if we get it right, Northern Ireland could see itself entering a kind of 'Golden Era' in the next ten or twenty years. Belfast is an affordable place compared to London or Dublin. There's a thriving musical community and the talent of musicians and writers are extraordinary. There seems to be the beginning of a foundation of music infrastructure that it is creating a much-needed bridge between here and the rest of the world.

Everyday artists jump on planes and fly to the likes of Nashville to write songs. I find that out of the few songs out of thousands that are written in Nashville every day, the only ones that succeed have heart. We may not have the conveyor belt that Nashville has, but like they have done for hundreds of years, our songs have heart in spades!

You’ve just released a new single, Bubblegum – what can you tell us about the process of putting the track together?

It's the first single from the forthcoming album Lessons of War. The album features a lot of collaborations with people from across the world who have been affected by war or conflict. The songs are closely tied with war also and I wanted to get a few different viewpoints by co-writing with select Irish songwriters.

I was driving down to Limerick to meet Mick Flannery to work on a song, when I heard a lady speaking on the radio about her recently found teenage diary. It was written around 1981, at the height of 'the Troubles' in the north. I was amazed at how normal subjects like boys, school and pop music were written by a thirteen-year-old in the same breath as riots, soldiers and hunger strikes. By the time I got to Mick and related what I had heard, the song was written very quickly.

It turned out the lady, Bronagh McAtasney lives not too far from me and she publishes her diary daily on Twitter under the handle @NrnIrnGirl1981. As the song is from a young female point of view, I asked a good friend of mine, Ciara O'Neill to sing it. I love her voice and can't imagine it done any other way now.

What are your ‘golden rules’ when it comes to songwriting?

If you mean four lines to a verse and repeat the chorus twice at the end? Forget about that sort of thing. I recently had the pleasure of performing a version of Beside You from Van Morrison's Astral Weeks for a fiftieth anniversary celebration of the album. The structure of that song is so loose, it's mental. I thought at the time, if I was to walk into a songwriting workshop with that song, they would be out with the big red pen before I was through half of it.

It was nice reminder that its sometimes better to figure out how to break the mould rather than constrict yourself to work within it. I suppose the one rule I have is, don't let one go. Sometimes a song can be coming through at the worst possible time, it doesn't matter, drop everything. It could be an absolute gem.

Do you have anything in the pipeline for 2020 that M readers should be keeping an eye out for?

My fourth album Lessons of War is due out in February. One of the key members of that album is Yazan Ibrahim, an incredible Flamenco guitarist from the Golan Heights that borders Syria. I want to get him over for some gigs and we're planning to go around some schools and talk to the kids about the songs. I'll be doing a few gigs to celebrate it, in Ireland and England.

Sign up to the mailing list at mattmcginnmusic.com to know where I'll be. The reason I give you the website is that I'm constantly confused with the late great Scottish songwriter, Matt McGinn. I love collaborations so I've loads of ideas that I want to pursue. We made a lovely documentary of the making of the Lessons of War record, as well as interviews of people that inspired me along the way. It's turned out pretty class. I'm looking into showing it at a few festivals. Looking forward to kicking off the next decade with a bang!
Features