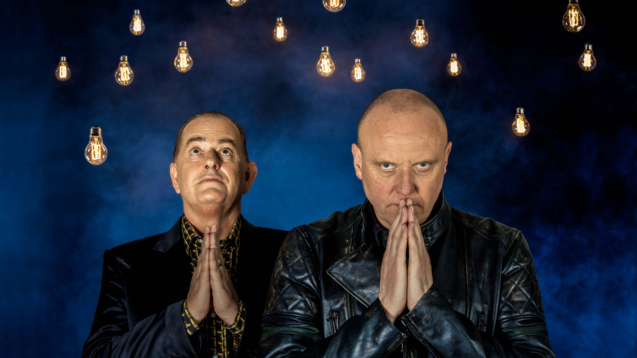 ‘I’ve never had any ambition to be Rick Wakeman and own a 1,000 keyboards’ - Heaven 17 and BEF’s Martyn Ware on 35 years as an electronic soul rebel…

For more than 35 years Sheffield electronic pioneer Martyn Ware has been toiling in the interface between man and machine, breathing warm blooded soul into his music making computers.

Less than a year after, Martyn continued his prolific run of form, releasing the first studio album under the British Electric Foundation (BEF) moniker, Music of Quality and Distinction Volume 1. This album of covers features all-star cast including Paula Yates, Billy MacKenzie, Glenn Gregory, Sandie Shaw and most notably top 10 hit Ball of Confusion a cover of the infamous track by The Temptations, as sung with powerhouse vocals from Tina Turner.

Fast forward to 2016 and Martyn is busier than ever, working on a new Heaven 17 record, creating soundscapes with his Illustrious company and now taking the BEF project out on the road for the very first time. The gigs will see a series of special guests in the form of Mari Wilson, Glenn Matlock from the Sex Pistol as well as Glenn Gregory from Heaven 17 performing. The latter will also mark the 35th anniversary since their debut record with a special performance as support… we caught up with Martyn to discover an artist still locked on creating the future...

Where did the British Electric Foundation first begin?

As you probably know the original Human League split in 1980 and I decided that I was up for doing something new. The idea for the British Electric Foundation (BEF) was cooked up by me and our manager Bob Last - it was to capitalise on our desire to spend more time in the studio so we created this production company.

We signed a deal with Virgin as the BEF that stipulated we could present them with up to six albums a year with different group identities and singers. Quite like Motown really. But of course it was totally unrealistic as the first thing we did was Heaven 17 and it took up all our time. We put out Music of Quality and Distinction at the same time as Penthouse and Pavements - for us it was a manifesto for soul pop.

What was the inspiration behind it?

At the time one motivator was that people said you couldn’t make emotional music with electronics. I thought that was nonsense and set out to prove them wrong. I always felt that using electronic instruments gives you an immediate sense of futurism and modernity, and therefore the leeway to reinterpret old songs in new way, hence that first record being an album of covers.

I read that another release - Music For Stowaways - was inspired by the Sony Walkman?

Yes that’s right – the Walkman was originally called the Stowaway which is where the album title came from. But it was only Stowaway for three months, then they changed it to Walkman. Stowaway is a better name to be honest. But we came from an experimental and artistic impetus - I wanted to run two concurrent things - make pop but keep experimenting, stimulating people - we came from fanzines, punk, DIY ethos - everything was an art project. We never wanted to turn our back on that.

Have you continued your interest in the format? And does that still impact how you make music?

I’m still obsessed with formats and their collectability. We’d always make an effort to do something special about how we presented our music.

We’ve now come full circle now as people like to own music. The problem with streaming, apart from the fact artists earn bugger all from it, is there’s no sense of ownership. You don’t feel like you own a record you hear on the radio and streaming is the same. I like looking in my record collection, seeing dog eared sleeves, it’s got the evidence of human interaction - even the smell changes, the scratches and the marks on a vinyl record. It’s all part of it.

Do you have a similar attitude towards gear and the way you make music?

I’m not a fetishist at all - which surprises a lot of people. I used to work with Vince Clarke and he’s got every synth on earth. But I only use two antique analogue synths. I’ve got the original System 100 Roland and a Korg 700 that I made Being Boiled with. I never had any ambition to be Rick Wakeman and have a 1,000 keyboards. We used to sell the previous model when it had run out of musical inspiration and buy a new one. That was the process.

Now I get sent stuff all the time - but the problem is having too much choice. It’s like having an infinite number of colours as an artist but the real art is selecting the right colour palette.

Does Sheffield still have an influence on you and your music?

I’m live in London but I’m always there as I have a Sheffield Wednesday season ticket. But there is a certain vibe that isn’t replicated in any other city. There’s a kind of mix of daring and bolshy attitude that I really like. It seems to me that most Sheffield bands are less concerned with fitting in and marketing than with doing something artistic and interesting. I’ve got a lot of respect for every era of Sheffield music. It’s still a unique scene.

I always think of Sheffield as having this innate, love and respect of people who get on with things and do things. In London it’s all about meetings and theorising about stuff. Sheffield is shoot first, ask questions later.

I’m doing a new Heaven 17 album - we’ve been on it for 18 months but it’s hard as Glenn has a lot of film and TV stuff. I’ve got a company called Illustrious which does large scale urban soundscapes. That’s what excites me most. I still love performing and writing pop music but I guess I’ve had to grow up a bit at some point and earn a proper living.

Yeah definitely the song is the important thing and if it can still appeal when played in different ways, then it’s generally a good assessment of its quality. There’s nothing trendy to add to it. A good song will never go out of fashion. There are certain algorithms that work in songwriting and I would encourage people to study the greats and deconstruct them. That’s what helped me understand what works and what doesn't...

The tour starts tonight (20 October) in Liverpool. Find out more about the BEF and live dates via the link below.