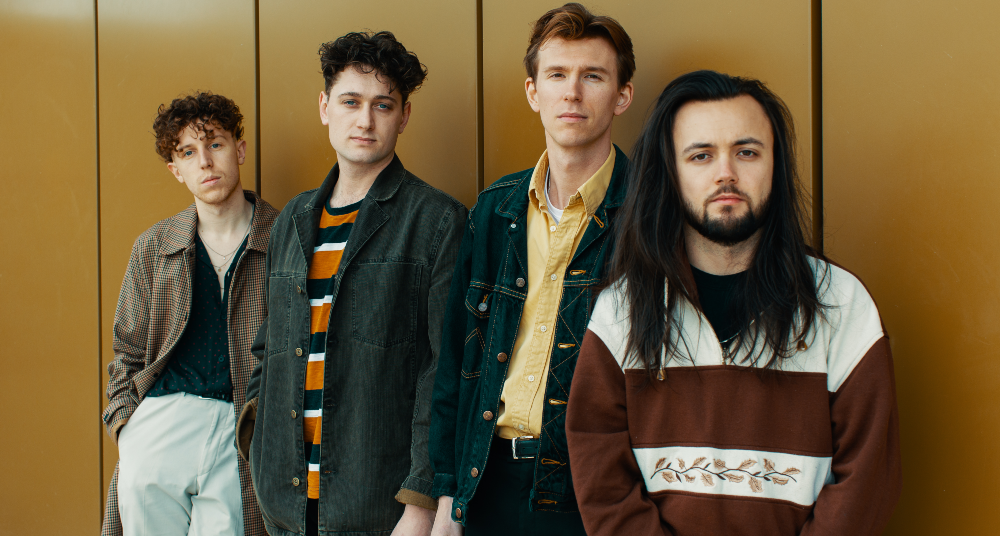 ‘A lot of the lyrics I’ve been writing throughout this period have been inspired by films and television. Because my own experiences have been limited, it’s been hard to write about anything personal apart from being isolated.’

Leeds-based indie-band Marsicans were all set for a festival-filled summer before the severity of the COVID-19 crisis became apparent.

With support from the PRS Foundation’s International Showcase Fund, the four-piece would have been performing as part of the British Music Embassy at SXSW in March. In a parallel universe, it’s likely that’s where this interview would have taken place.

Nevertheless, the band haven’t let the lockdown slow their progress and the releases are coming in thick and fast. Last month they shared a cover of Dua Lipa’s Don’t Start Now, recorded as part of Nura’s ‘Live At Home’ series, and earlier this week released their latest single These Days. You can listen to that below.

We caught up Marsicans bassist and singer Rob Brander to find out how the band are getting on.

Hi Marsicans! Thanks for taking the time to chat to us. Where are you holed up at the moment?

Hey! No problem. We’re all at our respective flats/houses, trying to work out how to exist without seeing each other every day.

How have you been coping with everything that’s going on? Have you managed to come together at all?

It’s definitely been a challenge to adapt. We’re used to spending all our time in a windowless rehearsal room, so not going outside hasn’t been much of a change, but not seeing each other in person has made band life very difficult.

Like everyone else, we have been having regular video chats and we’ve all set up little bedroom studios, but for a band like ours it’s quite hard to only exist on the internet.

For me personally, it’s been really helpful to try and stick to a routine. It might seem counter-intuitive to only be creative between 9 and 5, but staring at a screen on your own all day feels a lot more like ‘work’ than hanging out in a room with your friends, some guitars and a drum kit. I’ve tried to embrace that. At the start of all this, I was kind of forcing myself to pick up an instrument whenever I felt a glimmer of inspiration but, like most people, I don’t really make good decisions at 3am and, if an idea is really that good, it will usually hang around until after breakfast.

A lot of the lyrics I’ve been writing throughout this period have been inspired by films and television. Because my own experiences have been limited, it’s been hard to write about anything personal apart from being isolated. So I’ve been putting myself in the position of characters on the screen. It’s quite fun.

You were due to play at SXSW as part of The British Music Embassy line-up. How does a cancellation as significant that effect you as a band?

It was a real blow for us. SXSW was one of those bucket list kinda things, and we were all really excited to play the festival. It would also have been our first set of shows in the U.S. As well as an emotional kicking, it also affected us quite heavily financially. For a band of our size, that can be very difficult to bounce back from. We’re really thankful to the PRS Foundation for helping us shoulder some of that weight via their International Showcase Fund.

You received the PRS Foundation PPL Momentum Fund back in 2017. How did that impact the band’s trajectory?

It made a huge difference. The fund helped us to tour with a live show way above our station at that time. We managed to sell out every single show on a run of UK dates, taking a full lighting package, lighting designer, FOH sound engineer and crew members, who helped to present the band in the best possible way. Off the back of the London show on that run, we were booked to play the Radio One stage at Reading and Leeds festivals. A dream come true.

Your recent track Summery In Angus is great. Particularly into the stripped back rendition you released. Can you tell us a bit about it?

Thank you! Summery is a song that had been hiding on hard drives for some years before seeing the light of day. We always knew there was something special about it but couldn't quite get it right the first time we tried to record it.

When it came to choosing songs for the album, our producer Mickey Dale helped us to kick it around and create a version we were all proud of. When you peel back the layers, it’s quite a simple song, so lent itself well to a stripped back version. We had a lot of fun recording it, so we’re glad you like it too. That was also the last time we were in the same room before lockdown!

What can those who are yet to listen expect to hear from your new single, These Days?

It may be the most unapologetically ‘pop’ song from the record as a whole but deals with some heavy subjects. It’s about human connection and how technology has impacted the way we interact. Quite fitting considering the current climate.

Who are you listening to at the moment? Anyone we should be keeping an eye out for?

As I write this, it’s debut album release day for our friends Vistas and The Howl & The Hum, who are fucking great bands. I implore anyone reading this to listen to their music. You won’t regret it.

What do you have planned for the rest of 2020, coronavirus permitting?

We’re going to release our album in the best way we can, and have a tour booked for October that (fingers crossed) will go ahead. They’re our biggest shows yet, and we can’t wait to get back out and play live. It’s the reason we started this band.