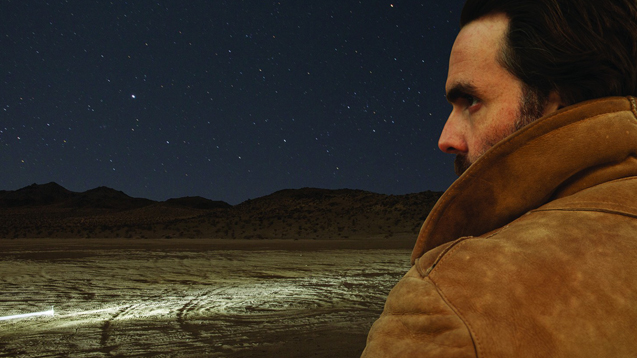 ‘Cities feel like they’re becoming corporate work camps, and the art being made reflects this’ - nomadic songwriter M Craft tells us why he headed to the desert to make new LP Blood Moon...

From Australia to London’s Dalston to Joshua Tree and back again, the nomadic songwriting of M Craft (Martin Craft) has always been moving.

This songwriter’s previous records have been influenced by city living. Recorded in pre-gentrification Dalston, 2003’s mini-album I Can See It All Tonight featured On The 389, a love letter to a Sydney bus route. Last Leaf of Summer (from 2009’s Arrows At The Sun) plots a bike through season’s change in Hackney.

For his latest release, Blood Moon, on Heavenly Recordings, his beautifully threaded songs are born out of the isolation of the desert heat of Joshua Tree.

I remember being influenced by music from several films in the eighties - Stand By Me, The Mission, Beverly Hills Cop, Ghostbusters, and Amadeus are the ones that come to mind. My parents had Beatles and Simon & Garfunkel records, cassettes of Alfred Brendel playing Mozart piano concertos, and some Greek bouzouki music.

When Gracelands by Paul Simon came out I was blown away, and then the John Lennon movie Imagine.

What/who inspired you to start writing your own music?

My older brother led the way. As teenagers in Canberra, Australia, there wasn’t much to do. We loved charity shops and going to the junkyard/tip/dump to find weird old bargain records, books, keyboards and guitars. Inevitably we found a cassette four track, made a band and started recording music together. By the time I was 16 we were signed and touring constantly.

Blood Moon is your latest album - could you explain how the record was made? How did you find the creative process?

For years I had been planning to make a piano record, but the right moment never came. I’ve always felt right when I’m playing piano, it’s like a meditation to me.

I found myself living in Los Angeles and came across a recording studio around the corner, in Echo Park. It’s called Grandma’s Warehouse. There is a fine piano there, a beautiful hundred year old instrument. I booked a session and simply sat down and played, improvised. Then a few days later I booked another session, then another, and another.

I took the recordings to the desert to work on them. The process felt more like a sort of song sculpture, in the sense that once the raw, hour long improvisations were recorded, the process was all about reduction, chipping away until a song shape started to appear.

Once the songs were in shape, I started adding more instruments and building up a sound. In Joshua Tree, I ran into the brilliant drummer Sebastian Rochford (Polar Bear), he plays on the record. I bumped into harpist Mary Lattimore (Kurt Vile, Sonic Youth) at a desert party. Kristina Train was on call in LA for a studio session and she offered to sing some background vocals. I met Paul Cartwright (Father John Misty) in LA and he helped me get the strings sounding lush. It was a very natural process, I was lucky that some great people drifted into the frame at the right time.

I knew that I was making something individualistic, so had it mixed and mastered before I played it to anyone to present it in the best light. I had an inkling about Heavenly Records, who I’ve always admired, they dance to their own beat- and I was thrilled when they offered to release the album.

How did you find yourself in the desert writing songs? And how did this impact how/what you created?

Like a lot of people, I often feel disillusioned by the way the world is going. I used to love the adventure and madness of the big city, but it's not the same any more. These cities feel like they’re becoming corporate work camps, and the art being made there reflects this.

In Joshua Tree there’s reason to feel wonder every day. The horizon is a hundred miles away, instead of a hundred feet away. The silence has harmony to it. At night there are impossible amounts of stars. And there are plenty of weird parties and art events when you need to tap into some form of society and see other humans.

Alan Watts talks about nature being ‘wiggly’, whereas humans build everything in straight lines. Everything in the desert is wiggly- the trees, the snakes, the clouds, the rocks, the hills. Humans are wiggly, but we feel the need to try to conquer nature by straightening everything, and we create a world into which we don’t actually fit ourselves. I started to feel much more at home amongst these wiggles than in the right angles and boxes of the city.

I used Protools on the record, but I didn’t use click tracks or grids or other such straightening tools. I often encouraged freeform drumming from Seb, and there are random sounds and bells and plucks all over the place…. in the hope that the space, the stars, the animals, and the wildness and wiggliness of desert life would come across on the record.

This is your third record - how have you grown as a songwriter?

On Blood Moon I felt my idea of ‘song’ was either evolving into something new, or completely devolving. I’m not sure which, probably the latter. I’m just not that interested by tradition, especially in music. I wanted to try to keep myself out of it and for the record to sound like it had come up from the earth. So I wasn’t trying to write clever lyrics, or soaring classic choruses- in fact I wanted almost unnoticeable lyrics, ones which would melt in the ears, allowing the record to be almost a sensory experience, rather than a head trip.

You’ve collaborated and worked with many other artists – what have you learned from these experiences? And how have they fed into your current guise as M.Craft?

On my solo records I do almost everything - writing, producing and most of the playing, and it’s sometimes like walking through a hall of mirrors. Collaborating is a much lighter feeling. More like a game - but a meaningful game. The combination of energies can create sparks. And it’s an opportunity to observe how others do their thing. I’ve worked with some amazing people, so the learning never ends.

I’m in Berlin for a few months to do some projects and to avoid the summer in Joshua Tree, which is outrageously hot, often around 40 C.

Have you any advice for new/emerging songwriters?

Nike has stolen the ultimate pearl of wisdom: just do it.

What else does the future have in store for you?

Another piano record- a sequel to Blood Moon. I’m hoping to make a cosmic synth record on Alan Watts’ houseboat in Sausalito, and a disco project a la Arthur Russell that I’ve been thinking of for quite a while. They might all end up amalgamated! I’m also producing a couple of records for other artists this year and some interesting songwriting projects.

Watch the video to Chemical Trails below. Blood Moon is released on 17 June.