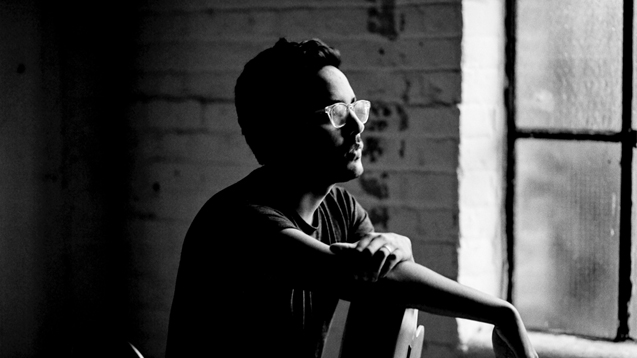 The weight of expectation is something that can hang heavy around new artists, and, ultimately, be more of a burden than a blessing.

But Luke Sital-Singh is a youthful singer songwriter who has managed to successfully navigate his way through the cloud of hype that billowed around him when he first emerged.

His debut album, The Fire Inside, released in 2014 via Parlophone followed much acclaim from the Guardian, other broadsheets as well as a selection on the BBC's Sound of Poll. Fast forward to 2017 and Luke is no longer with the label, but seemingly in a happier musical place than ever before, using his songwriting as a way to navigate through the trappings of hype and get back to his creative source.

Time Is A Riddle is his new second album made with producer Tommy McLaughlin from the Villagers and sees Luke going deeper, sounding more like himself and confident than ever before. We caught up with this 28 year-old artist to unpick his musical journey, discover more about the new record and how he used his songs to power him beyond the hype…

How did you begin making music?

I got into music in my early teens. I was into nu-metal which is quite far removed from where I am now. But it was my first introduction into wanting to be in a band and why I picked up a guitar.

But ultimately, that music didn't really take hold. It was only hearing Damien Rice's O that converted me. I'd never heard that sort of sound before and I suddenly knew that's what I wanted to do. I picked up an acoustic guitar and started learning all his songs, performing at open mic nights. That's how it started.

Listening to Damien Rice opened the gates to this big wealth of singer songwriters, which is a fairly nondescript term. It doesn't do justice to the music that falls under that umbrella.

So your progression into the music world was a very natural thing?

I was also into acting so could have gone down that route. But I loved being on stage and that was a big part of getting into music. I was never geeking out at home over records, it was more about the performance aspect. Then the performance side grew into songwriting.

When did you realise that music would be all encompassing?

It's been a strangely slow, organic process. I'm a bit of a pessimist really, I still don't think I can do it and I'm surprised that I have done. But there have been a couple of points where things went well. I studied at BIMM in Brighton, which was a big thing. I also remember when I was first played on Radio 1, my first single, Fall for You, it was so un-Radio 1. That made it feel real.

It's been a gradual thing but when I signed my publishing deal, quit my job and I could pay rent from music, that was amazing.

Time Is a Riddle is your new record - what was the idea behind it?

There were a lot of moments where I felt it would never happen. The first album was on a major label, it didn't quite work out and the relationship fell apart. It was only gradually that things started to come together. I'm not too prolific but when I am happy with one song, I send it over to my manager. It's quite a symbolic moment that I'm pretty happy with. I sent over the song Time Is a Riddle. It was the first one for a long time. He came back really positively and it unlocked the rest of the record.

Who did you work with on the album?

We'd toured with Villagers a few times and the guitarist Tommy McLaughlin. He'd told me he had a studio, where he'd produced that first SOAK record. It was in a really beautiful place which met one of the criterias I had for making the album. I wanted to make it in one space and let the space speak to the music.

We made the record in a very live way with a group who were knew each other. We'd all toured together, felt comfortable, there was a lot of trust which meant we didn't have to overthink it. It was great putting it together.

What's next for you?

We're going on tour across the UK and Europe, then hopefully plotting something in America. That should be fun.

It's a kind of comeback year. I'm a bit negative about the major label thing but it did a lot to put me on the map and into a position where I'm able to continue. I guess a music industry 'career' is always a tightrope all the time where you're never really comfortable until you're headlining Glastonbury. So I feel like this is a big year for proving myself. I'm really proud of this album, it's a lot closer to the vision I had for the first one, it's a lot more me. I'm just really excited to see what happens with this record.

It's tricky as I’ve done the normal music industry thing, you get hyped up, find yourself on some of these lists tipping you for this, for that. It's very easy to get sucked into it. It's hard to know whether you should sign with a major or not. My only advice is to try and learn from every experience as much as possible. I don't regret signing to Parlophone. Who knows where I would be now. I think being able to make the best out of everything you can in this industry is what it's all about. Because no one really knows what they're doing. Everyone is trying to make all these plans. But really no one quite knows what will sell so many records. You just need to take as much positive as you can from every experience.

Listen to Killing Me from Time Is a Riddle below.

You can catch Luke on tour at the below dates

Tickets on general sale from smarturl.it/LSSTour