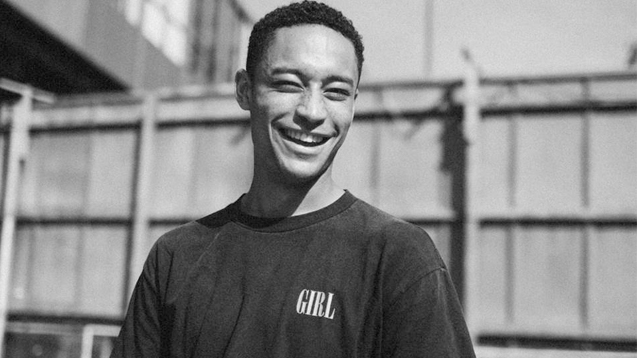 We meet Loyle Carner, South London’s hip hop whiz and one of the nicest young artists around, to chew the fat on songwriting, cooking and his debut LP, Yesterday’s Gone…

From a debut gig supporting MF Doom to his Chilli Con Carner project cooking food with kids with ADHD, young rapper Loyle Carner’s career to date may have been short but he’s already shown that he’s a one off.

This young wordsmith was weaned on UK grime and classic hip hop before finding his musical feet in collaborations with his South London mates.

This grounding in bedroom studios has held him in good stead, with his music picking up pace over the last 12 months following a BBC Sound of 2016 nomination, a gig at PRS for Music's SXSW showcase and now a debut album that is looking like one of the biggest of 2017 to emerge thus far.

Yesterday’s Gone is the record and shows off his love for hip hop, jazz and grime and announces his arrival as a true force to be reckoned with. We caught up with Loyle to find out what it means to be a twenty-something talent in 2017 and how, now he’s found his musical feet, he’d like a dog. And to fall in love…

It came from being around my mates at school. I remember back in 2004 when I was ten years old, Lethal Bizzle’s Pow came out. That resonated massively with me. I’d known about grime before but it was the first time it was accepted by me and my friends. I started mucking around with it. Plus hearing Roots Manuva and Skinnyman for the first time, these were all pivotal moments. They all shaped me bit by bit.

I was fortunate enough to have friends who made beats. They grew up just down the road from me so we’d hang out and make music, just for fun really. We’d send it to friends so we could listen to it while playing FiFA. It was never to play sold out shows – although that was a big dream but it seemed further away than playing football for England.

My family was very musical - everyone wanted to be a musician but it never happened for anyone. It was drilled into me from a young age - not that it was impossible to become a musician - but I could see how hard it was to get anywhere.

What do you enjoy most - recording or playing live?

I just like it when a song is finished and I’ve said what I want to say. Performance comes into that but being able to say exactly how I feel is great. That eureka moment is what I strive for time and time again.

How important was the Brit School to your musical evolution?

I was studying acting there so it didn’t have much to do with music. But as a person, it was the first time I was treated like an adult before I felt like one. That did affect me as I trusted myself by this point and my instincts. I’d already made mistakes, but I was allowed to so I could move forward from them.

And your first gig was supporting with MF Doom? How did that happen?

It was ridiculous. My friend was supporting him and he asked me if I wanted to jump on the set and do it with him. That’s how it went down in the end. It was ridiculous and nowhere near ready for it. I did the whole show in my jacket cos I was freaking out.

How does the writing side of things work for you?

I usually just write in my head to start off with, just the first four bars. Then I put it away wait until a beat comes that matches the feeling of what I was writing. That could come in six months, two days or whatever. You never know but I stock up on sparks of ideas. I like to start things and not finish at first, then finish when I can recapture that emotion.

I just record in various bedrooms in South London. That’s where I make music.

Yesterday’s Gone is your debut album - what is it about?

I wanted the record to sound like home - all the voices you hear are ones I hear all the time. That was important, that it feels like home and is very honest. Hopefully it’s a reflection of what it feels to be like living in South London in your early twenties.

Did you feel pressure in putting it together?

Not really - I feel quite easy about it all really. After the BBC Sound Of Poll last year I was reluctant to rush it and put an album out. People were telling me too but it didn’t feel like the right time to be honest. I’m confident working at my own pace and I know that this album is the truest representation of myself. I’ve done everything I can and said everything I want to say.

I just hope it’s heard by as many people as possible and help people if they’re having a tough time.

Well we’re going on tour for the whole of February, then trying to head further afield later in the year. Then festivals. I also want to find the time to get myself a dog and fall in love.

How have political goings had an impact on your writing?

It will probably impact my future music. But yeah dark times. I saw a brilliant t-shirt yesterday which said ‘make racists afraid again’. I would like to get one. There’s a lot going on and it will affect me - it’s impossible to hide from it.

What’s going on with the Chilli Con Carner project?

We’re hoping to get it cracking in the spring and summer and do some more courses for the kids. It’s for 14-16 year olds suffering from ADHD and want to learn more about it and draw positives from it, not just the negatives.

Have you any wisdom for aspiring wordsmiths?

Keep writing and don’t worry about it, even if you don’t feel like writing today or tomorrow. But when it strikes, write – it will happen again for sure.