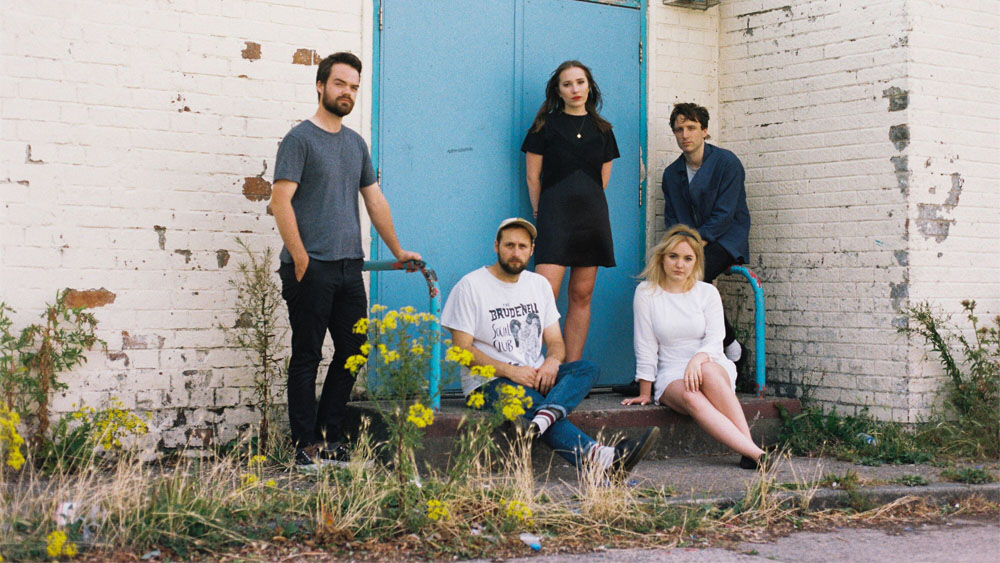 Drawn from across Hull’s tight knit DIY community, the five-piece band of multi-instrumentalists have spent 2019 surreptitiously honing their own unique sonic landscape.

The first taste of the fruit of their labour is their new single Don’t You Ever Sleep, which casts them as post-punk futurists via the track’s distorted synths, swaggering bass and pop sensibility.

Although Low Hummer are still in their infancy, true to their native town’s City of Culture status the band are already making waves beyond the city’s limits and have been picked for this year's Live at Leeds Ones to watch.

We caught up with the band’s guitarist and singer Daniel Mawer to chat about the origins of the band, their latest single and what they have lined up next…

I saw The Maccabees aged 16 at The Welly in Hull and decided there and then that I wanted to be surrounded by live music forever. Still regretting that move (I work there now!). My first ever gig was my eighteenth birthday. I chucked my guitar, mic and speaker into a wheelbarrow and took it down to my local pub. I nervously played my out of tune rubbish songs to my mates who politely clapped along. After ten years, nothing much has changed!

I met John and Jack at the Adelphi club where we’d watch stuff like Adam Green, Courtney Barnett, Josh T Pearson and loads more. John has been playing music since he was really young, we have a shared love for The Beach Boys. Jack would share demos of songs he’d written, and I’d share music I liked with stuff with him until eventually we were in a band together. Aimee and Steph, I met at music nights around Hull.

Aimee is a country singer with matching cowgirl hat and boots, Steph is Hull’s answer to Emily Brontë, she writes amazing articles for magazines, she also single handedly keeps the music scene in Hull alive thanks to the amount of gigs she’s bought tickets for and forgotten to go to.

I love the idea of a bunch of oddballs hiding away in their garage making weirdo music with battered instruments, writing songs that has a cosy feeling of nostalgia, whilst also having one eye on the future. That’s sort of our mission statement and we’ve got the oddball bit down to a tee! Fonda 500, Elastica, Pixies, LCD Soundsystem, Talking Heads; they all fit that category for me.

How does the songwriting process work between the five of you?

First, I come up with a song and demo it, then I send it to the band to see what they think. If I’m feeling brave, I bring it to a band practise to try. More often than not, if it doesn’t work after a few run through’s, we ditch it.

Sometimes the band butcher the song to pieces until it’s a completely new song, and every so often, the song just clicks, when that happens I have a huge sigh of relief and don’t feel as compelled to keep up the bug of writing for a couple of weeks.

What can you tell us about your latest single Don’t You Ever Sleep?

The song is mainly about late night online comfort shopping, which I tend to do a lot of after working at/playing a gig. It’s a short-lived comfort that’ll help me get through late night panic attacks, often bringing about a hangover the next day when I’m even more skint having ordered another broken instrument off the internet.

We wanted the synths to be at the centre of everything we do and have used Don’t You Ever Sleep as a blueprint for what we aim for in our songs. A mixture of simple melodies, off kilter synths and fuzzy guitars.

What’s the music scene like in Hull, and how has it impacted the band?

Hull’s music scene is a beautifully inclusive and hardworking community. The city celebrates music of all genres in equal measure and doesn’t have a lot of time for elitism. The result of that means a lot of mixed genre billings and artists supporting each other regardless of difference in style. The city constantly battles incorrect preconceptions of it being a rubbish place to be. I’d like to think there’s a great defiance that Hull has, to prove opinions wrong.

I feel like being from this city means as a band we’re pretty resilient and determined.

You’re playing as part of Live at Leeds’ Ones to Watch at the Brudenell Social Club on 12th October. What can we expect from the show?

We’re a new band so every gig still feels fresh and exciting to us. To play a venue like The Brudenell so early on is humbling, we’re incredibly excited to share a stage with a really ace list of artists that Live at Leeds Ones to Watch has conjured up. We’ll rattle through our half hour set with as little fuss as possible, with as little breaks as possible, and as much energy as we’ve got.

We have another single ready to go, along with plenty of studio time before our first headline show in sunny ‘Ull at our spiritual home, The New Adelphi Club, this Christmas.

Don’t You Ever Sleep is out now via DTTR.