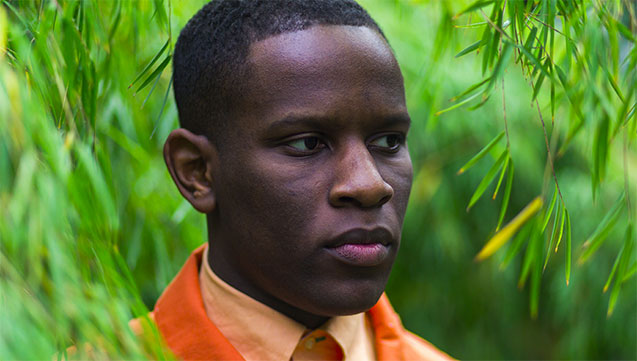 Clean Bandit collaborator Love Ssega on how he arrived at his own effervescent pop sound...

Love Ssega’s effervescent pop bounces around all the major touchpoints of soul, disco and funk, before landing on a sound all of its own.

With a surprise round every bend, his songs artfully navigate the more chart-friendly angles of Metronomy, Prince and Talking Heads, putting groove at the heart of it all.

You may be familiar with the South Londoner already, as he had a hand in Clean Bandit's massive 2014 hits Mozart’s House and Telephone Banking.

Since then he’s released a string of solo slow-mo jams and pop belters, including his latest instalment, Emancipation! EP, featuring the killer track Hot Electrolytes.

What’s the first song you ever developed an obsession for?

Yann Tiersen’s Summer 78 from the Goodbye Lenin soundtrack. Maybe a strange choice for a songwriter, given it hasn’t got any lyrics, but I was really was obsessed by it. A beautiful hypnotic track - I can’t work out whether it counts as a song or not, but I like things I can’t figure out straight away. Aphex Twin is the same. I get obsessed by things that surprise me. Normally it takes lyrics, but sometimes not.

When did you first get into making music yourself?

I lived with some Hawaiians in Boston for a year when I was 19 and bought a ukulele. What can I say, I’ve had an interesting life. No joke, I recorded my first decent-ish songs with that on my old Fisher Price. Obviously I’d sung and performed before, including at school with my friend Jonathan who went on to be in a certain band called JLS, but these were just soul covers and the like.

Only when I got enough money for a Maschine, SP404 and Kaoss Pad can I say I was making music and not just writing songs at a piano say. Plus when I had a band to write for. Clean Bandit’s Telephone Banking actually started off as a dirty 808-bass driven track I’d initially written. Fancy that.

What have been your biggest inspirations and influences along the way?

Record labels that have created legacies from Motown, Stax to Ed Banger and now TDE (Kendrick Lamar, SZA). Artists with a story have also been an influence, so unsurprisingly I study them, read the liner notes.

Hearing how Joni Mitchell self-produced Blue even though her label wasn’t so keen, is inspiring and a reminder that artists always should fight for their art. Nowadays I also look to other creative minds, such as producer/director Issa Rae (HBO’s Insecure), Riz Ahmed and Donald Glover aka Childish Gambino. They’ve created their own lanes and built success on their own terms.

Do music and chemical engineering have any parallels?!

Extreme patience. You’d be surprised, but that has served me to this point! Doing a PhD took about four years, so no one’s going to rush me in music. Execs come and go, so if you’ve got a particular vision stick with it. Just like with science research, sometimes you’ve got to ignore doubters, especially those who can’t work it in the lab.

How does your music come together? What’s the process?

My music normally goes a different way whenever I start writing, but I always start with the music first before adding a vocal. I’m always writing, so really my focus these days is song selection and things that are relevant to me. That could be writing songs to make people feel better like Hot Electrolytes or for them to think a bit more like with Out Here Looking. I’m slowly developing themes with each EP, so listeners can follow my path as an artist. I want to be judged on my music, not any other stats or hype. And the best way to test songs is by testing new songs out live. That’s the most fulfilling part of the whole process.

Is it important to you that it’s a solo project, which you oversee from start to finish? Or would you be open to getting others in to work with you?

Funnily enough, I often prefer working with others! I only started producing because I was writing faster than people would get back to me. Then bands I admired started reaching out for me to remix or do little bits of production work, so I thought I must be decent enough, and maybe I should keep stuff for myself.

I’m really not fixed on one way of working, but in terms of a solo project, it has to be my vision overseeing it. To put it simply, I have a perspective that isn’t represented and a story to tell. And I want to make it easier for the next young black boy from South London who doesn’t just want to make R&B or grime. That’s my secret crusade for now.

Your music brings in electronics, new wave, pop, disco and more – how would you describe your sound?

I struggle to describe my sound, so pop is the safest thing to say, but all those other influences are definitely there. On the other hand, ‘alternative’ also works because that gives artist like James Blake and alt-J to make whatever type of sounds they feel like. That’s a great position to be in. Like Frank Ocean, he just makes his own genre.

My Emancipation! EP launch and planning more for my live show. Quite simply I write music so I can play live and luckily I have an amazing five-piece band, who I’m proud to be able to play with. I want people to come and see us live.

Creatively, I’m pretty self-contained and have a cool team of people around me who, like me, enjoy making stuff and taking risks. It’s just making music and having fun at the end of the day. I’m glad to have got here at this stage as I can look towards an album sometime after this EP - I pretty much know what’s going to be on there.

What can we expect from your show at the Momentum Music Day in Norwich?

A special performance to fit the beautiful venue of Norwich Arts Centre. I always try and tailor my performances to the venue, which is why I’m a bit selective, so don’t expect it to be the same set as the co-headline Day/Night Funk, Soul & Disco special at Oval Space in front of 1,000 punters. Looking forward to doing a unique interpretation of my tracks.

How has PRS Foundation funding helped you out?

Immensely as mainly such a great co-sign on an artistic and professional level. I don’t always take the easiest path, so it’s good to know that a society like PRS Foundation believes in what you’re doing and then will put money where its mouth is to support. They’re all about the music and I think that’s what the industry needs to get back to.

https://www.facebook.com/lovessega/
Features
Back to top