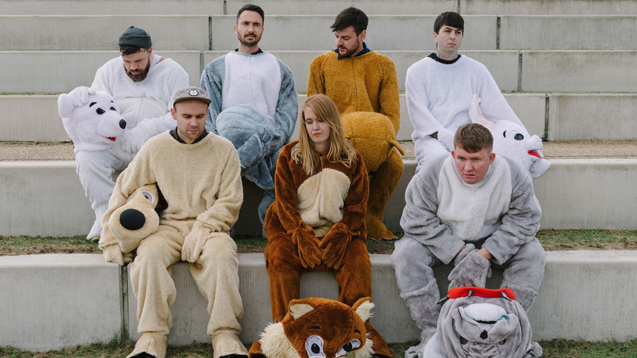 Seven piece indie aces Los Campesinos! have used their love for football to fund their new LP Sick Scenes - we learn how with frontman Gareth David…

Ten years in the life of a band is a long time, particularly in the often fickle of indie rock.

So it’s testament to their determination, friendship and of course, musical ability that seven piece Los Campesinos! are still in action and arguably sounding more spritely than ever.

Their new, sixth record, Sick Scenes, will be released on Wichita tomorrow (24 February) and follows some years of music industry wranglings and personnel changes. But the record is bursting at the seams with guitars, harmonies and live affirming angular sounds. Made over a summer of football in the baking Portugese heat, it’s the sound of a group both optimistic and firing on all sonic cylinders.

Currently out on tour in the US, the band will be delighting UK audiences in April. Ahead of the release and their domestic live outings, we quizzed the Los Campesinos! frontman Gareth on the latest record and how new artists can take on the music industry and win...

This is a terrible thing to say but I wasn’t into music as a child and teenager. My main interest was football. My favourite band to this day is Beautiful South and I guess a lot of people my age were brought up on them due to the popularity of the Carry On Up The Charts, the best of which sold an insane amount.

Through primary school that’s all I was aware of, then at senior school I was really hung up on Gangster’s Paradise. Then anything my mates were into really. It wasn’t until I was 16 that I started getting into music. That was a reaction to being an outsider at school where you can use music to create your identity and differentiate yourself from other people.

Was it that point of difference that made you want to write?

When I was 16 or 17 the music I was writing was pretentious and snarky. But then Neil who I lived with, my best mate to this day, he started a band. I was jealous so did it to join in. And that’s what has led us here. Most of my motivation for music has been jealousy or to belittle other people. Which won’t come as a surprise to many.

We’d watch other bands and think we could do it. And do it a little bit better. Neil met Tom and we were all immersing ourselves in bands like Pavement and Dinosaur Jr. It became a quick friendship and back then Cardiff’s scene was great. We’d be watching amazing bands every night and we immersed ourselves in it. Our music very quickly became something much bigger than we expected.

What was the tipping point for Los Campesinos!?

We started being in a band right at the end of the music industry boom. It was when guitar bands were signed for a lot of money and labels could take chances. We were one of the last examples of that, at a time when MySpace was still a legitimate tool to promote and A&R bands. It’d gone past the point of sending demos to record companies. We made a demo for 100 quid in our local community centre, uploaded it and posted a link on the Drowned in Sound forum and within two days we’d been offered a couple of record deals.

What are your thoughts on how the business has evolved?

We’ve enjoyed watching how the industry has changed. The tools available to bands now mean that they aren’t reliant on labels, management and PR. That’s ultimately a positive, it means they can do the work themselves and reap the benefits.

Do you think there’s anything that needs to change to help new bands?

It needs to be easier for them to get advice and cheaper to do PR. I see so many bands shipping out money for press releases and to booking agents and they’re immediately losing income. There needs to be a lot more on offer for bands for short term advice to seek help on certain issues that come up when they’re getting some attention.

Sick Scenes is your new album - what does the record mean to you and the group?


It’s a big one, it feels great to be releasing it as it comes after a pretty tricky three or four years for the group in terms of our relationship with the music industry. When we started the band, we were able to release albums rapidly and that was momentum we enjoyed. But post-2013 we started experiencing issues with management and labels. It made us take a look at how we can exist in the industry as a seven piece band.

We self-funded this new record, saved money the band, we’ve all been working proper jobs to pay for the group. Last year was the tenth anniversary of our band forming, and to celebrate we made our own football shirts. We sold over a 1,000 of them in ten days and we had to stop as we couldn’t keep up with posting them out. That’s how we funded the record, we suddenly had all this money to make it.

We’re six albums in, have certain sonic standards we want to adhere to and saved up enough to work with John Goodmanson and flew him over from Seattle, then decided to record in Portugal as it was cheaper. It’s just been so empowering to be doing everything ourselves, knowing where every single penny goes. It’s a shame to talk about money and music being interlinked but it’s a reality that people should know about.

We’re touring the states which is something we’re always lucky enough to do. Because we’ve not done a proper tour since 2012, there’s almost a new generation of fans out there waiting to see us. That’s really exciting. We’ve all got marriages, mortgages so the fact we can go away for three weeks and drink for free, play music and be on a tour bus will be great. The best thing is that because we’re all over 30, we don’t do it as often. We’ve missed it so much. But our bodies are less prepared than ever for it.

For new artists, have you got any advice?

Try to get an awareness of how the industry has changed. And not just revert to type in terms of how you think it should be done. There are so many online platforms out there now so you can take your time, do your research. To gather of an awareness of everything to do with you, your music and where it sits within the industry is the best thing to do...

Listen to 5 Flucloxacillin from Sick Scenes below.