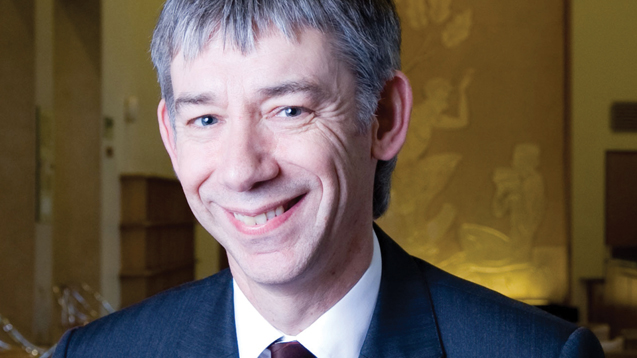 Founded in 1840 by a group of Liverpool music lovers, the Royal Liverpool Philharmonic Orchestra is one of the North West's most prestigious musical institutions.

Giving over 80 concerts each season in the Liverpool Philharmonic Hall, as well as performances from the orchestra taking place across the UK and rest of the world, the Phil is at the heart of the city’s musical culture. Its contribution includes collaborating with various events and bands as well as bringing music to local schools via its successful In Harmony project.

We caught up with the organisation’s chief executive Michael Eakin to get his take on the health of Liverpool’s music scene… and if you’re in Liverpool, then catch the orchestra in full flight as part of the Liverpool International Music Festival (LIMF) tonight (22 July)…

How did you get involved with the Liverpool Philharmonic?

I’ve been here seven and a half years now. Previously, I was Arts Council director in the North West, working with the Phil and others across Liverpool. Prior to that I ran a range of concert halls and venues. Years ago I was in Reading where I ran the Reading Concert Hall and also worked with Womad, setting up that event. My background professionally is in theatre, performing arts, and presentation of one kind or another. I was attracted to the role as the Phil is quite unique - we’re the only organisation with a full concert orchestra and hall.

If you think about peers, in terms of Manchester or Birmingham, the orchestra and concert hall are separate organisations. That means our programme is very, very diverse across orchestral and popular repertoire of all kinds.

What did you aim to achieve when you took on the role?

It’s a very well established organisation with a strong reputation locally and beyond. When I started it was towards the end of 2008, the Capital of Culture year. It did really well and we used it as a platform to be ambitious artistically. Key priorities were to build on that year and not slide backwards in terms of artistic quality or with audiences.

We also wanted to invest in the building and renovation of the hall. That was critical for us. I wanted to make sure that we built our place internationally, regionally and locally. There is a risk sometimes that an organisation like the Phil can be seen as separate from the city and its music scene, playing to a narrow demographic. So an absolute driver is to ensure we are at the heart of the city in all sorts of ways, whether through the economic regeneration, education, social improvement or the wider music industry. We are a Liverpool organisation and our strengths start in our relationships with local audiences, peer organisations and the city's private and public sector.

What have been the key projects helping the Phil plug into the city?

One really important thing for us has been a project called In Harmony. We’ve been doing this in Everton since 2009, one of poorest wards in the city. It involves children in local schools, giving them a chance to make music and develop their talent as far as they want to take it. It’s also about being part of that community and helping attainment in the schools. So it’s a social change programme as much as one about music. That’s been important - we have 75 fantastic musicians working in Liverpool. As well as performing, practicing and recording, a lot of them are out and about in the city doing education work in all sorts of settings.

In Harmony has been such a transformative project, which we have sustained now over seven years or so. It’s gained us huge recognition and helped ensure people view the Phil in different ways they might have before.

Who has the Phil partnered with in the city?

We have partnerships with a whole range of festivals events such as LIMF. The orchestra has worked with a lot of established Liverpool musicians, most recently with Cream Classics at the Cathedral, as well as gigs with Cast while we’ve worked with OMD, Echo and the Bunnymen, Elvis Costello to name just a few.

That makes a clear statement saying how we like collaborating with other musicians from the city, and there is real value in these collaborations when done well. That of course helps us draw a different audience too.

As part of our renovation, we’ve also created a new small space called the Music Room. This is an intimate cube, seats about 180 with its own entrance. It allows us to put on a range of music, from local artists and beyond.

What are your thoughts on the health of Liverpool’s music scene?

Yes it is healthy. In the last ten years, the number of smaller scale venues around the city has improved a lot. Baltic, Camp and Furnace, LEAF, Music Room - although the Kazimier has gone, in overall terms, the number of venues and artists performing, as well as local artists, does feel good. There’s a lot of local band and talent - ably showcased by the GIT Awards. Our own orchestral musicians are doing side projects across genres as well and finding peers to work with.

The composer’s side is interesting - Liverpool, through Hope University and University of Liverpool, has a strong, classical compositional tradition. We have been key to that. We do contemporary music for the orchestra and for smaller ensembles, known as ensemble 10:10. Within that, we’ve always looked to nurture local composers. Gary Carpenter did the first newly commissioned piece at last year’s proms. Earlier this year, there was a touring production of a new opera Pleasure written by Mark Simpson. We’ve worked with him as a composer from an early age.

Is collaboration a way of characterising the local music scene?

Collaboration is important but we can still get better, particularly in how we support new talent in the city. How do you find the opportunities and develop the skills to plug into the local scene? I think there’s enough critical mass to work together to do that.

It’s about collaboration but it’s also eclectic. There’s a strong classical tradition, a lot of amateur choirs, classical musicians, composers and orchestras in the city alongside the Phil itself. There’s also a very eclectic pop music and folk scene. This latter has been hugely part of Liverpool’s DNA. A lot of pop music has a melodic quality. The Beatles influence is still immense but they were influenced by what they heard in the city when they were young. This is a city that creates and responds to rich and melodic music in a particular way. But at the same time, it also has a huge variety. It’s always risky to make generalisations. The edges are always much more blurred than that.