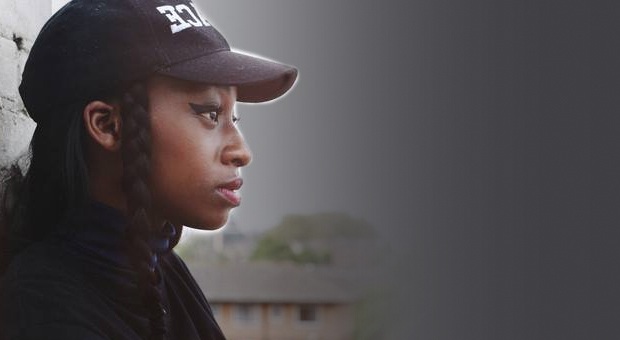 ‘Independence is an important word for me’ - London rapper Little Simz on songwriting, being mates with Kendrick Lamar and doing music DIY…

Barely in her twenties and London rapper Little Simz has already achieved plenty in a musical career which has truly rocketed over the last 12 months.


Making music full of personality and fierceness, the rapper has built a fan base through a series of mixtapes released since her teens before catching the eye of Jay Z’s Life + Times blog in 2013. The site premiered her Blank Canvas mixtape, helping propel Simz onto the global stage.

2015 has only seen the pace of her ascendance quicken with debut LP A Curious Tale of Trials and Persons dropping and turning plenty of heads with its on point character depictions and up front musical productions. It’s seen her get more props from the likes of Kendrick Lamar and pick up an international audience she’ll be looking to wow when she embarks on her first global tour in 2016. We met her to get to the bottom of one of UK rap’s brightest new stars…

I think I did my first performance when I was about nine at the O2 academy in Islington. That was definitely my earliest memory of doing music. I was pretty young.

Did you always want to make your own music?

Yes definitely. From a young age, I always dreamed of doing it, of writing my own material and performing it to crowds around the world. Now I’m actually doing that and it feels kind of surreal.

How did you discover you had a voice and you could rhyme?

I don’t think I discovered it until recently. I always felt like I had something to say. It’s something I loved doing. I enjoy it, it’s fun and I thought I was good at it. I feel like recently, I’ve been feeling, okay cool, I do have a voice. I’m growing and speaking to my generation with my music - how do I feel about that? It’s a lot of pressure to a certain extent.

Which artists did you look to when you were younger for inspiration?

Lauryn Hill was a major influence on me. Her album is one of my favourites of all time. I still love and listen to it this day.

What was your first big break with music?

I don’t think I’ve had my big break yet. I think it’s still yet to come. I have a lot of work to do and I don’t know when this big break is going to happen. Up until this point, it’s been a lot of graft to progress and improve. I’m holding out for the break.

How did you make your debut album, A Curious Tale of Trials and Persons?

I recorded it in a month at Red Bull Studios. I basically wanted to make a concept album for a debut because I feel like it was needed, it’s what we’ve been missing of late in our music. So I talked through different perspectives. I wanted to be really open and honest with my listeners.

Who did you work with on the record? How did you pick your studio collaborators?

These were people I’ve worked with on all my music, on previous projects of mine. So because of that, it felt natural and right to work with them on my debut. Just because they could help me find a particular sound I wanted. I knew them and the way they worked and wanted them involved.

Did you have the idea behind the record in place before going into the studio?

I didn’t really. Before I went in I had a few ideas but when I went into the studio I tightened up these creative loose ends, and came up with a lot of music from scratch. It was definitely a quick process but it’s easy for me to make music. It didn’t feel like anything but natural.

How did you link up with Red Bull?

They’ve always been very supportive of me and my music for a long time now. It was just a very organic relationship. It started when I went and did a session at Red Bull with MNEK and ever since they’ve embraced me with open arms. They’ve just been really supportive of my career.

Did you have any issues with working with such a big brand?

To be honest, it’s not been something that’s bothered me too much. I don’t worry about it because Red Bull get it. They understand me and what I’m trying to do. They are familiar with the world I live in and come from. Although they are a huge corporation, they’re still very much involved in culture and what’s happening today so they get me and my music.

You released the record on your label - do you think it’s important for new artists to retain their autonomy?

I think so but it does depend on the artist in question. Everyone is different but it works for me. Independence is an important word for me. The concept of that. I wanted to show people it can be done. I’m not saying I never want to sign up with a label. People get that misconstrued. But I haven’t had the right situation. If it comes up and it’s right, then maybe but I’m not going to worry if it doesn’t.

Have you been surprised by the success of the record?

Yes definitely. I didn’t expect anything so the response to the music is almost overwhelming. It makes me feel good about my music. It’s amazing but at the same time, I’m not complacent. I want my next material to be on another level. I’m excited.

Getting praise from Kendrick Lamar must be a massive thing?

Yeah it’s cool. I’ve said this before many times, I’ve met Kendrick on numerous occasions and he’s said this to me in person. To some people it was a shock when he said this but to me it wasn’t as he’s been supportive for some time. It’s kinda like a friend from a distance - that’s what it is and I’ve expressed my gratitude to him. I’ll always be grateful as he didn’t have to big me up. It’s a real recognises real kind of thing.

Yeah I’m just being creative now man. I’m working on some new and fresh material. I try to not think too much about what’s to come. I just try and focus on writing, focus on having a month off before commencing a tour. I’ll be using this time to stay creative and spend time with my family and friends before I go around the world for three months. That’s where I’m at at the moment.

Are you surprised by the global success?

Yeah like I said, I don’t expect anything so it’s good to know that my music has reached a global audience. It’s a huge thing for me but I also have work to do to make sure it reaches other places too.

Have you got any tips for emerging artists?

Don’t take any advice and always do more than the bare minimum.

A Curious Tale of Trials and Persons is out now. Look out for Little Simz playing live dates on her world tour from January 2016...
Features
Back to top