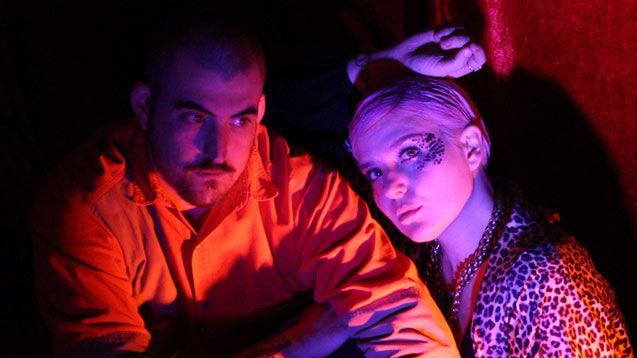 Experimental pop powerhouse LibraLibra have only just released their first single, Animali, but it's a total mind-melter. Here, Beth and Joe spill the beans on their skittish sound...

If Tune-Yards, Fever Ray, Jain and Lapalux are their touch points, then studio-sculpted world-pop is their natural landing spot.

Beth wrote and performed the lead track Bone on their debut album Ojala, and played with the band at Iceland Airwaves and Le Guess Who Festival last year.

Her sizeable vocal talents consume the track, and it’s a similar story with LibraLibra – think Kate Bush crossed with The Knife.

Beth and Joe’s debut single Animali, which landed on Friday, is a monstrous introduction to the band, all rattling percussion and harmonic acrobatics.

Now in the process of building a team around them, they’re promising a lot more of where that came from this year, both in the studio and on stage.

We check in with the pair to chat inspirations, electronics and opera…

Joe: My dad is a sound engineer and producer, so I've been pressing things in studios ever since I can remember. I started playing drums when I was 11 and, as soon as I turned 16 and got my first laptop, I downloaded a demo of Reason and started to make terrible beats every single day.

Beth: My first taste of songwriting came in my GCSE music course where I wrote a 12-bar blues song called Jailbait Bird and the Daddy. I got an A in case you were wondering ;)

Beth, how did you first find your voice?

Beth: At home my sister and I loved to try and impersonate voices such as Cher and Ronan Keating. But predominately I sung throughout school, being dragged out for many solo performances in choirs and recitals, two arias I honed down to a tee - Dido's Lament from When I am Laid in Earth by Purcell and Piangero from Gulio Ceasar by Handel.

Mrs Bennett, my singing teacher and choir master of the Cantare Singers, an all-girl choir I was in, was my rock at school. Even when my school forced me to sing in chapel every Sunday, she made it worth it. However, school was like a constant show whereas at home I was able to be myself and channel my inner Cher, Ronan and I loved Heather Small!

Joe: Before I was into electronic music I was into a lot of noise rock, prog and punk stuff. I discovered At the Drive In, Refused, Lightning Bolt and The Mars Volta just after I started to learn drums. Then when I got a little older and I got into electronic music and the making of it, I discovered Flying Lotus and all the Brainfeeder stuff. My personal favourite from all that is Lapalux. I think his soundscapes and ideas really influenced me a lot. Also, when I discovered Zach Hill, his entire back catalogue, Death Grips etc, it melded all the stuff I'd been listening to throughout my life into one thing which I thought was amazing!

Beth: Tears for Fears, Pet Shop Boys and New Order had me dancing since I was five and they were my solace from the chaos of school. I'd make dance routines every day to those records. It progressed to Enya and Madonna, and then onwards to Pink Floyd which blew my mind when I first heard them at the age of 15. They opened my eyes to so much other music and influences ever since. Ps - shout to Sonique, forever in my heart!

How does your music come together? What’s your process?

Joe: We always try to get away for long periods of time to write. We usually go up to the countryside in Lincolnshire and unload our ideas in rough demos. We then return to the studio where we've been working with Ben Hampson at his awesome place on a farm just outside of Brighton, and dissect and build everything back up with live and bigger instrumentation.

Are you working with anyone else at the moment?

Beth: At the moment we're integrating two new guys into the band. We have Guy Jones on bass and synths and Scott Reynolds on guitar. Their addition has really beefed out our live sound and we can't wait to play loads of gigs. Guy's got a lovely pink kimono for the occasion courtesy of his wife, Molly. Cheers Molly. I am also in Simon Raymonde’s new project Lost Horizons, so have a bunch of dates with them booked in for April, as well as some festivals over the summer.

Do you prefer recording and making music or performing?

Joe: I wouldn't be able to choose! I love playing live so, so much but I'm also a complete studio nerd and love spending days locked away in a studio writing and playing with stuff.

Beth: In the words of Natalie Imbruglia, I'm torn. I get equal satisfaction from both, yet both are very different, personal experiences.

Joe: Mine would have to be starting songs and never finishing them. I must have hundreds of unfinished songs or ideas on my laptop that I really need to revisit.

Beth: Falling down the opera well.

Beth: I watched that show The Sinner on Netflix and the song Huggin and Kissin by Big Black Delta got stuck in my head on repeat and led me to listen to the whole album that actually came out in 2013. The whole thing is banging and I'm a massive Beth 'Fannon'.

Lost Horizons are on tour throughout April and LibraLibra play The Boileroom, Guildford, on 2 May and Sebright Arms, London, on 11 May.