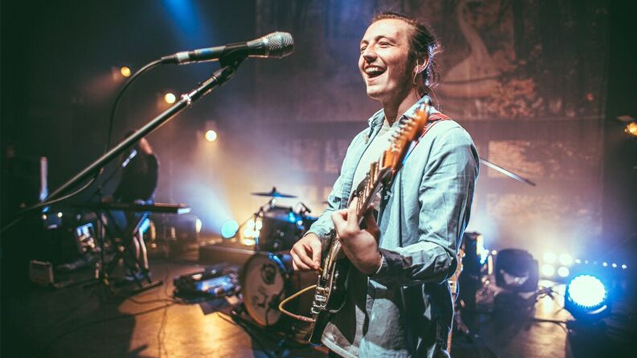 Young singer songwriter Lewis Watson is an online sensation who's just bagged a record deal with Cooking Vinyl. We find out how…

Youthful singer songwriter Lewis Watson achieved early recognition when, after several years of uploading his own videos online, his self-released EP It's Got Four Sad Songs on it BTW became a Top 10 iTunes hit in 2012.

For Lewis, it was his online presence that snared him a fan base and audience, leading to a deal with Warner Brothers and the release of his debut album The Morning.

After regular gigging around the UK and in the US and Australia, Lewis is now gearing up to release a second album, this time after recently inking a deal with Cooking Vinyl. Ahead of the LP's unveiling, we meet a rapidly emerging songwriter with a big future ahead of him…

I've always been a fan of music. I grew up as the youngest of three kids, my dad had a massive record collection (that we loved to scratch unfortunately...), my mum always had the radio on, my sister listened exclusively to Justin Timberlake. My brother loved rap and always had a Tim Westwood compilation playing.

So I'd listen to every style of music because I was brought up around it, from Stevie Wonder to Slipknot, Beanie Man and Blink 182. That helped me when it came to creating.

Who or what inspired you to make music your own music?

I always wanted to learn to play the guitar. My parents bought me an old strat from one of our neighbours with a little practice amp when I was probably around eight years old and I loved it. I learned the solo from Californication and felt like the best guitarist that ever lived but after I broke a string, I had no idea how to fix it and gave up. When I started to watch people covering songs on YouTube, I thought 'I want to do this', asked my parents for a cheap, Argos acoustic guitar for my sixteenth. That's when it really took off for me.

Definitely releasing my first EP. It was a real home-grown creation. I'd written all of the songs alone in my room, I was in college studying music technology at the time and my tutor - and now great friend - Joe Porter asked me if he could produce the thing and so we did it. It took about five days in his home studio and it was done. I paid a website to distribute it and put all of my money into getting 1,000 physicals made. I already had a following from YouTube so sold them all (with an individual drawing in each one) and that's when the labels got in touch. That was my big break.

You’ve just signed a deal with Cooking Vinyl for your next record - how did this come about? And why Cooking Vinyl?

They have been in contact for a while and always showed interest in what we did. They said that they wanted to get involved after we released the first track from this album in January and so my manager and I spoke about it a lot and decided that it was a great idea. They are such a great company, they have wonderful ideas and are filled with integrity. They are also home to the guy who inspired me to pick up an acoustic guitar for my sixteenth birthday; City and Colour.

Just for people to enjoy the sound and connect with the songs. I'm really proud of this album, the songs have been written for a while now so it was great to be able to finally get into the studio and allow them to grow into what they've become. The themes are similar to my first album; love, loss, etc but I've taken a different approach to creating them. They're bigger sounding, a bit more optimistic, we've got strings on a few of the tracks, it was made in one room with one producer and one band which is a luxury I didn't have with album one.

How can new and emerging artists stand out in the current musical climate?

I stand by the thought that good music will always rise to the top. It may take a month or ten years but it will get there. I got extremely lucky in the early days, I hit YouTube at the right time, I had my heart broken at exactly the right time, I made the right decisions - admittedly without really knowing - when it came to the creation of my first EP, etc. the stars aligned for me but I believe that if I stuck at it - and kept gigging, writing, and learning - I would've made an impression eventually.

Have you any tips or words of wisdom for songwriters?

Keep writing. Ed Sheeran once told me that songwriting is just like turning on a really old tap, the water that comes out initially will be dirty and undrinkable but, soon enough, if you keep the tap running that water will be clear as day. So keep writing and finishing songs, they can only get better.

lewiswatsonmusic.com
Features
Back to top