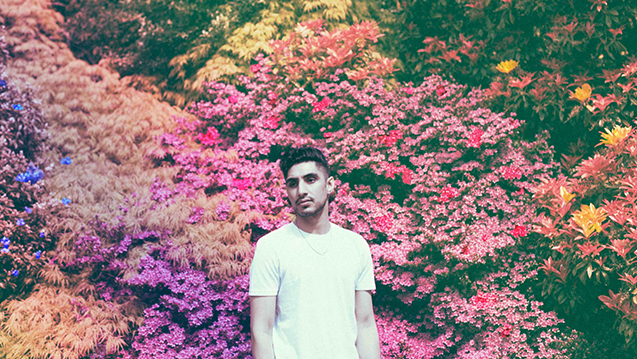 Leo Kalyan takes his slowly percolating electro-soul to SXSW this week. He reveals how his Indian classical training & love of M.I.A is shaping his US-friendly sound...

Two years ago, London-based Leo Kalyan uploaded a refix of Duke Dumont's Need U (100%) and Jessie Ware's Running to SoundCloud.

The track was anchored around his own elusive vocals and revealed the baby steps of a classically trained Indian musician who’d taken to the syncopated buzz of electronic music like a natural.

The re-edit caught the zeitgeist, going viral almost immediately and giving Leo a platform for his own blend of tripped out, hip-hop influenced R&B.

His organic rise has been underpinned by self-styled ‘oceanic beats’ and slowly percolating electro-soul, best experienced on his debut self-penned track Temptation and latest offering Daydream.

In between, the stuttering majesty of the Karma Kid and MNEK collaboration Over You, which was supported by Annie Mac, MistaJam and Huw Stephens, helped get his name out there.

But it was his Silver Linings EP, released last autumn, and its monster track Fingertips, that really helped spread his name far and wide.

This week he’s taking his homespun progressive pop to SXSW, with the help of BBC 1Xtra and PRS for Music Foundation.

We spent some time with him ahead of the trip to learn more about how his Indian classical training and love of M.I.A is shaping his sound…


What sort of music did you grow up listening to?
An eclectic mix of things. I used to train in Indian classical music, so I would listen to a lot of world stuff, Bollywood music, things like that. I was also into trip-hop through my mum and auntie, who would play Massive Attack, Tricky and Sade - a lot of dreamy, leftfield pop and nineties music.

When did you first find your voice?
Probably when I was about 12. I used to imitate singers like Janet Jackson and Mariah Carey before my voice broke. I could sing really high pitched notes and my friends would say I really sounded like who I was imitating. It was then that I realised maybe I could sing.

You first got noticed in 2014 by posting a refix on SoundCloud. Had you been doing stuff in your bedroom for a long time before then?
Yes, absolutely, I’d been experimenting with music-making for a while and I’d played around with a few different kind of sounds. I think everybody goes through a bit of an evolution. You know, the first few songs you make are always a bit iffy (laughter). So, yes, it takes refining, to find your sound.

I write my own stuff and sing it - but I also produce it all. And that’s where it all properly started, just sitting down in front of a computer. Being from London, I have lots of friends who make music and it was through watching them I learned how computer music is made.

Is that what made you switch from learning classical Indian music to electronic pop?
Yes, I put up that first refix of Jessie Ware and Duke Dumont, then people started re-blogging and reposting it. It gave me encouragement because people connected to what I was doing.

What kind of Indian classical music were you learning before that?
It wasn’t something you’d learn on a course… I had a guru essentially. It might sound really pretentious but he was called an ustad or guru, which just means teacher. He is an elderly music scholar, sitar player and singer from Bombay and he lives between South London and Bombay. I started learning from him – it was almost like an apprenticeship.

In what way?
It’s very different to any traditional form of learning. Essentially, I was just going to his house and he was teaching me various traditional instruments and rhythm patterns. Indian classical music is divided into different scales called ragas, which are pentatonic, and can be five note scales or full scales.

How has that experience influenced the music you’re making now?
When I first started making music I was trying to figure out how to blend what I’d learned with what I was digitally able to make on a computer. It’s taken me some time to figure it all out. That’s been part of my musical evolution or challenge. I’ve wanted to bring those things in for a long time, I just didn’t know how to do it.

Who have you been inspired by along the way?
Definitely artists like M.I.A. If you think about it, there are no South Asian artists on the radio. There are hardly any signed to labels either - apart from maybe XL who have M.I.A and Jai Paul. However, if you listen to pop music or R&B you’ll hear loads of South Asian influences. Timbaland and Pharrell always say they take so much from Indian rhythms and music. And it’s sampled by everybody; by Will.i.am, 50 Cent and Timbaland. Just think about Britney Spears’ Toxic and The Neptunes stuff. They all take so much from Indian, Pakistani, Bangladeshi, South Asian musical tradition. Seeing people like M.I.A come up and be able to combine it all in a personal way is so inspiring. I guess I’ve been trying to find my own way of bringing it together…

It sounds like you’re at the start of something that could go in any direction…
Absolutely! I really do feel that. It could go in so many different directions and I am literally trying to figure out how to marry my formal training with what I have in my head and my influences.

How do you feel about your first trip to SXSW?
I’m excited. I’ve always wanted to go to South by South West. It’s one of those things you read about other artists doing, especially early on in their career. It was so amazing to be asked by BBC introducing, by BBC 1Xtra and PRS for Music Foundation; it just completely came out the blue. I’m very humbled.

What are you most looking forward to?
Taking my music to a different audience. I have a lot of American fans, thanks to Spotify and other streaming platforms. There are lots of Americans who seem to really connect with the trip-hoppy R&B that I’m making. It’s quite big over there - it seems to be more popular over there than it is here. I’m really excited to see how the audiences react.

Why SXSW?
It feels like the perfect place because the festival hosts so many different kinds of music it’s full of people who really do love music.

What does the rest of 2016 hold for you?
I’m just taking it song by song at the moment. I’ve got loads of music finished off, the tricky bit is deciding which track to release next. I’ve been working on loads of different things and there are loads of directions I could choose to go in.