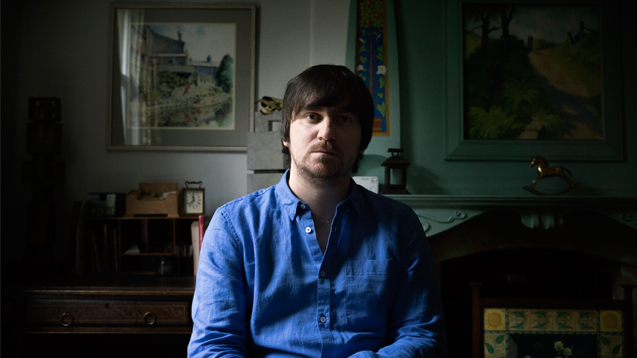 Former Coral guitarist Lee Southall has moved to Yorkshire and made a solo album inspired by the moorlands he now calls home. We find out how this fresh start is behind his new music…

Storms of both the emotional and meteorological kinds are at the hub of the debut solo offering by former Coral guitarist, Lee Southall.

Lee left the Wirral's group of psychedelic troubadours in 2013, upping sticks and taking himself off to the moorlands of Hebden Bridge.

It was there that much of Iron In The Fire, his debut record, was written, influenced as much by the changeable weather outside as the musical upheaval he’d recently gone through.

The result is a beautifully crafted collection of songs nodding to harmonies of the West Coast, classic songwriting of John Martyn and much, much more. We find out how this fresh start is driving a new surge of musical creativity…

I grew up on Merseyside and my dad is a big Beatles fan. He played in his own band in the 1960s. A strong, early memory for me is my dad teaching me chords on the guitar, and both of us playing Norwegian Wood.

Who or what made you want to start writing your own musical material?

Like many of my generation it was The Verve and Oasis. They created the moment when you think this is what I want to do. The fact that these bands were made up of working class lads from the North of England made it seem possible, achievable. I remember sitting in my bedroom learning all The Verve songs. I was friends with Bill Ryder-Jones and he was in a band, and the rest is history.

You were guitarist in the Coral - how did your experiences in the group shape you as a solo artist? And was solo material always something you wanted to create?

The Coral was something like 18 years of my life. It was an amazing experience and it was also work. The band had a solid routine, rehearsals, practice every day. I still play guitar every day, it's not something I have to think about or make time for, it's just what I do, and I guess this has carried through from the band days. Obviously I spent a lot of time in the studio and on stage with the band, so I feel pretty comfortable in both environments. I guess this history feeds into my solo work. Becoming a solo artist only came into focus once The Coral ended. Everyone was working on their own projects and it just seemed natural to keep working.

What artists did you look to as inspiration for your new record and solo material?

When I was writing the songs I guess Bert Jansch was a strong influence, because I start by picking melodies on the acoustic. During the recording process I had a clear sense of what the record should be sonically. Classic tracks like John Martyn's Solid Air and James Taylor's Fire & Rain were reference points. Okay, I was recording in a small digital studio but I was striving for quality.

How has Hebden Bridge helped you develop and change as a songwriter?

Well, I'm the only member of the band to have moved away. So I arrived in Hebden as me. It was a massive change, moving away from family and from friends I'd known since school days. Staying in your home town and being 'famous' in your home town is a weird one. It's a bit of a bubble really. Moving somewhere different pulls that security away but it also gives you more freedom because you're anonymous. It gives you a different perspective on yourself and who you are, and it gave me the confidence to write my own songs.

What do you like best about living and music making in the hills of Yorkshire?

I grew up on the coast and I now live as far from the sea as possible. Don't get me wrong I love going back to visit family and take my daughter to the beach but living inland has its attractions. The landscape is really dramatic in West Yorkshire, steep, wooded valleys and barren moorland. I live on the hills above Hebden and we can experience every season in one afternoon. When the snow falls it stays, the village down in the valley can be shrouded in mist until mid-day and the rain really is horizontal. There's a lot of weather references in my songs (Misty Mae, Under the Weather, Above the Storm). I recorded demos of the songs in my conservatory and you can hear rain hitting the roof, birds singing in the garden. There's space and solitude here but there's also a music scene within easy reach. Hebden Bridge has The Trades Club, and it's a short train ride to Leeds or Manchester.

Iron in the Fire is your debut solo LP - how did you approach the record? What is the album about?

I had a bunch of songs I'd written and a friend of mine John Heron was really into home recording, so I went round to his house and we did the first demos. I caught the home recording bug from John and he helped me put a home studio together. I played everything on the demos, bass, drums, keys. I really got to know the songs and got a feel of what could be done with them. Another friend Ant Davey had a studio in Manchester and that's where the album was recorded. I knew the sound I was going for and the lads at Airtight just got it straight away. Recording was such a positive experience. What's the album about? Well, it's about my life since moving to Yorkshire; transformation, becoming a father, raising my daughter and dealing with the storms that life can throw at you.

I'm already working on a second album, but 2017 will be about promoting and touring Iron in the Fire. The album comes out at the end of April, so we have launch events planned for May and hopefully a tour in the Summer. Fingers crossed It will be a great year.

That's a tough one. There's a mechanics to writing songs, a structure. I suppose it's useful to learn that and once it's in your head you can start to play with it, move beyond it. The saying 'write about what you know' is kinda useful but I'd say write about what you've experienced, what you've felt, that's what people respond to in songs.

Iron In The Fire is out now.

Listen to Shade of Blue from the record below.