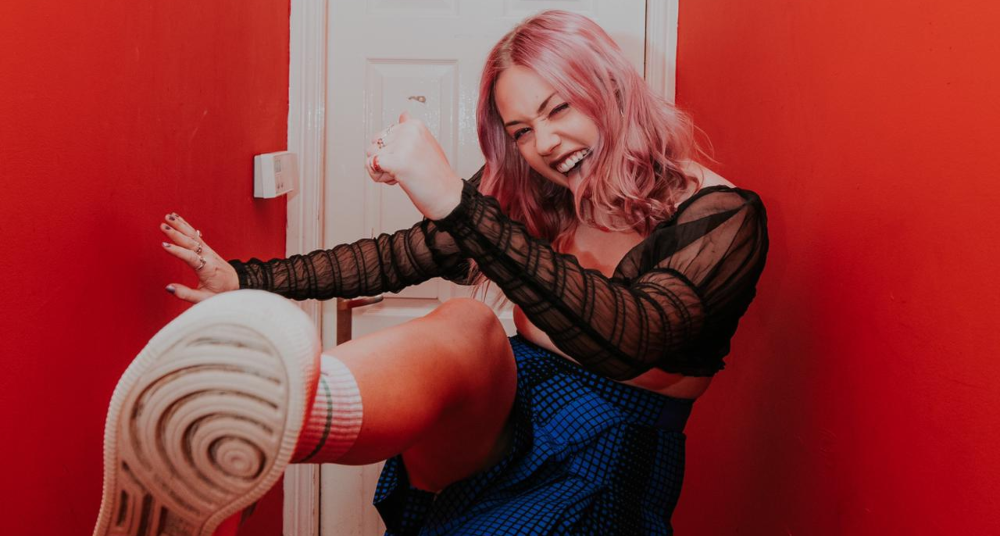 ‘It’s a scary time but I’m just staying in, getting my head down, trying to use it to do loads of writing and recording.’

Isle of Wight native Lauran Hibberd has seen her career and popularity go from strength to strength in the last few years, and it’s no wonder. With her clever, tongue-in-cheek lyrics and her knack for a great hook, there’s almost no doubt at this point that she’ll soon become a household name.

With two EPs, another on the way and plans for a full-length album in the works, she’s rising through the ranks of slacker pop and making a name for herself across the industry.

We spoke to Lauran about her start in music, the challenges of being a musician currently where gigging isn’t possible and what she has planned when the world returns to normal.

You played the PRS Glastonbury stage last year, what was that like?

You know what, I can’t remember how we got involved with that! I remember it being quite a last-minute addition, potentially couple of weeks before. Someone reached out and said, ‘do you want to play the PRS stage?’ And it was really exciting because through PRS Foundation we’d had Flash Funding to create some vinyl, so that was brilliant. Do you know what? It was the best sounding stage, it was so good in there, I loved it. And it had a little bit of air conditioning in the van round the back, so I was absolutely beyond happy to be there.

How did you get started in music?

I got started in music when I was about 14 and I had my first guitar lesson. I was looking for a hobby because I was pretty rubbish at everything else, but I loved having guitar lessons. Then before you know it I was like ‘oh I can sing a little bit’ and then six months later I started writing songs and then just never stopped. I caught the bug for it.

Talk us through your songwriting process?

I normally have a list of notes on my phone of little prompts and ideas, like song titles or good lyrics I might think of in the day, or stuff I overhear other people saying. That’s normally where I start, and then I pick up a guitar or whatever and I go from there really. But it’s normally lyrically driven.

Do you write on your own?

I do, yeah. I write on my own a lot of the time, I also write with my band members and sometimes my producers as well but, yeah, normally by myself.

How did growing up on the Isle of Wight affect your music?

I’m still here now, representing! You know what, it’s a really lovely place to grow up. It’s beautiful, but I think when you’re my age and you’re trying to make being a musician happen it has its hold ups.

I started off playing gigs on the Isle of Wight. I was lucky enough for one of my first gigs to be Isle of Wight Festival, so that was really cool. People do support local musicians, but there isn’t really that many places to play, so I was quite quick to get off the island and start playing in closer towns and cities like Southampton, Portsmouth and then London and what not.

But it’s more the travel aspect that’s a bit of a hold up, the ferry is a pain. If you’re playing in London and then you want to get home and you miss the midnight ferry, you’ve got to wait there until 3am. We’ve done that a lot of times now where it’s become old news to us. We’re like ‘oh god another sausage roll at 4am, brilliant.’

How are you coping in the current circumstances re COVID-19?

I’m fine. I was pretty bummed at the start because I was supposed to play SXSW and that was the first big musical thing to get cancelled. And at the time it didn’t seem like it was that bad, the whole virus situation, so I was like ‘oh my god’ and it was the end of the world and little did I know that three weeks later we’d be on lockdown. It’s a scary time but I’m just staying in, getting my head down, trying to use it to do loads of writing and recording. Just trying to make it as good as I can. But yeah, I’m pretty much fine, apart from the occasional cry but that’s pretty standard anyway.

Well I’d never done a live stream before, I was always quite anti them when people had suggested them to me. Why would you do it there when you could just go out and gig? But actually, you do get a similar kick out of it like you do at a gig, because you’re playing and all of these comments come through. When you’re performing, I know people clap at the end of songs, but you don’t really get people’s feedback. You can see people messaging like ‘I love this song, I love how you just did that.’ In a way it is the new age of gigging isn’t it, the virtual world? I would obviously rather get out and gig, but I think it’s a really good alternative.

Plans have changed slightly, but we’ll still be heading out with The Academics. We were supposed to be going out on tour with them in April, but now that’s been postponed until September/October time. I’ll releasing another EP this year as well, which is quite exciting and I will be putting a new single out at the end of April, so I’m really excited about that as well.

Do you have any plans for a full-length album?

I do, yeah. We’re writing, really trying to get the thing together at the moment. It’s definitely something I’m silently working on in the background.

How do you feel your music has evolved since you started out?

You probably wouldn’t even recognise my old music. When I started I was very much a folk artist, I used to write songs on an acoustic guitar and my favourite artists were Laura Marling and Feist. It has turned a big corner and now people call it slacker pop, which I’ve gone with. I don’t know what that means, pop for lazy people? I’m happy with that, if that’s what they want to call it!

I’ve kept the lyrical aspect of what I loved about music before, but I think I’ve managed to turn it into this weird Weezer-esque garage thing that sits with my funny little bubblegum vocal and it’s weird little concoction, but I think it works.

Who are your biggest influences?

My favourite band is Weezer, I love them. I’m a really big fan of Phoebe Bridgers, Courtney Barnett. I’m really into that Australian scene, like Skegss and Hockey Dad and stuff like that, so I’ve got quite a wide range of influences.