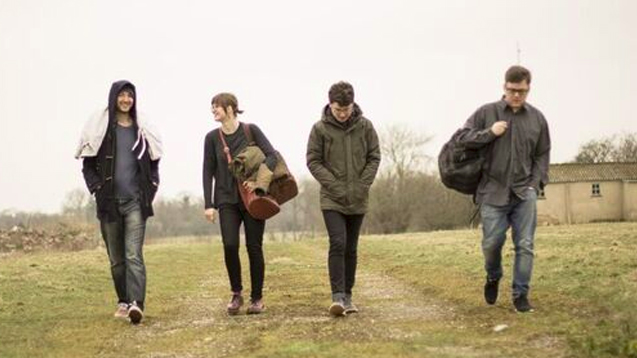 ‘With this sort of music, it’s not about having a big break, it’s about having the courage to carry on’ - jazz trumpet composer Laura Jurd tells us how to succeed outside the mainstream…

As 2016 draws to a close and music critics start the annual ritual of compiling their best of lists, jazz trumpet player Laura Jurd’s Dinosaur and their debut album, Together, As One, will be high on the list of the more discerning.

Stitching together jazz strains with more experimental electronica and even the sonic inflections of indie rock, the record has proven to be a hit with alternative types and builds on a successful few years for Laura.

The composer received the Parliamentary Jazz Award for Instrumentalist of the Year and has previously been shortlisted for a BASCA British Composer Award, received the Dankworth Prize for Jazz Composition and the Worshipful Company of Musician’s Young Jazz Musician of the Year award. The PRS for Music Foundation has also recognised her talents, providing her with backing via its Women Make Music Fund. Here we find out about the record and how courage is needed to thrive on the outside…


I grew up with a piano in the home and loved playing that when I was younger. My parents recognised that I was really into music, I used to improvise on it and I ended up having lessons when I was only aged five. It started from there really, then I began playing trumpet in school and just loved it straight away.

Which artists were you first into?

I guess it wasn’t until I was older that I started connecting things. But when I was about 12 I bought Miles Davis’ Kind of Blue. I was playing trumpet and people had mentioned him to me. That was the beginning of my record collection really.

Was there a moment when you realised that music would become an all-consuming passion?

I’ve always seen myself as a musician and never considered doing anything else. But there were moments when I’d listen to a piece of music and be blown away by it. It just confirmed that it’s something so special that I couldn’t do anything else. We were playing Michael Tippett’s Child of our Time and I remember being totally blown away by it. It’s still one of my favourite pieces.

Have you got a compositional process to how you create your music?

I guess you need to get used to it, you can’t be too picky about how or when musical inspiration hits. I always try to keep a clear and empty mind, I’m always listening to new music, trying to go to as many gigs as possible to keep me inspired. As an improviser, I’m naturally drawn to being creative but being clear headed helps kick start the process.

Your debut album with your group, Dinosaur, Together, As One, has recently been released and is picking up some amazing reviews. How did the record come about and how did you go about writing it?

We’ve been playing together as a four piece for some time as we all went to Trinity Laban Conservatoire together. So we formed about six or seven years ago. This is the band that was also on my first album, Landing Ground. So from music college I’ve always been writing songs for them.

Over the years I’ve been writing more and more music for the band, but in the last year or so, there was a set of music that fell into place. It seemed like we’d established a nice way of working with each other having played with each other for a long time and developed this sound. So it felt like the right time to make an album as just a band. The sound of the way these guys play and how they improvise really inspires the compositions.

Have you been surprised by how much love it’s been receiving?

Yeah it’s been so great, it’s so lovely as the four of us have been committed to the cause for a while. We tried our very best to do everything right with this release, how the album looks, the build up to it. We’re just really chuffed that people have recognised the effort and that people seem to be enjoying the music.

Have there been any artists in particular who have influenced the record?

I get asked a lot about influences but it’s not something I think about too much when I’m writing. I can kind of analyse it afterwards. I love Steve Reich’s music and there are little moments on the record when I think you can hear that coming through. There’s more electronic music coming through with this one too. There’s a great American alt rock band I really like called Deerhoof and their music has been a great inspiration. There’s a British band called Perfect Houseplants - even though they’re a bit before my time I love those records and they’ve influenced my sound.

What’s next for you then?

Well we’re gonna be playing the music from this album live over 2017 – we’re playing in the UK and Germany, Belgium, Ireland as well to do a tour too. I’ll be writing some new music, thinking about a second album too. I’m planning on some collaborations at the Gateshead Jazz Festival too.

Is the jazz scene in good health at the moment?

It is in that there’s lots of great music being made, bands that are doing exciting things. It’s an interesting time for bands and any artist to work out how to communicate with audiences, there are many pros and cons to that as well. But I think we need to reach out to a much wider audience than ever before. Alternative music is more popular than it has been recently. It’s trying to not just think about jazz but ourselves as an alternative music. The word jazz isn’t the most helpful term sometimes. But there are all kind of good things going on.

Have you any advice for new artists?

The one thing I always have to keep in mind is to keep on doing things, persistence pays off, nothing is going to change over night. With this sort of music, it’s not about having a big break, it’s about having the courage to carry on. That’s how it works.

Catch Laura and Dinosaur out on tour in January 2017.