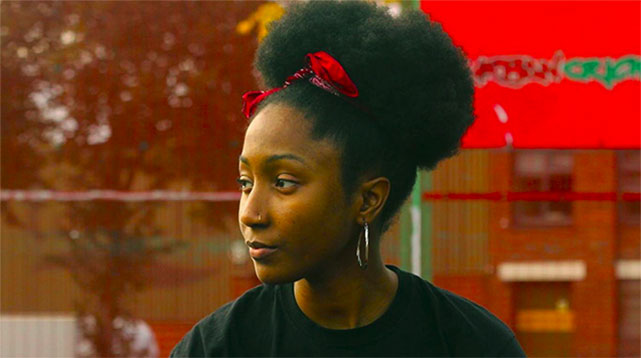 We catch up with the fast-rising Birmingham emcee at the GRM Daily Rated Awards to hear what she's plotting for 2018...

With a Get Rated gong freshly secured, courtesy of last night’s GRM Daily Rated Awards, and an anticipated new EP in the wings, it looks like her first moves are playing out nicely.

The For Figures EP drops early next month, following up on a smattering of previous releases (including the super-smooth EP The Graduate), which have suitably whet appetites in her hometown and far beyond.

What’s in store for your new EP?

It’s called For Figures and it’s me looking for inspiration around me. It’s about not straying away and being tempted by other things, such as public figures who look a certain way or dress a certain way, and keep it real to myself. Or figures in terms of money – so not being tempted by that and staying true to the music I make.

How difficult is it to stay focused and creative?

It’s a bit hard, but not so hard I can’t manage it!

I played acoustic guitar in a band when I was at school. It extended into lyricism and I developed a love for hip-hop – and it just grew from there.

What can we expect from your new music?

Hopefully quite a lot! I’m hoping to push my sound to bigger places with this release. The new EP is going to be available everywhere to stream and I’ve got some physical copies too – physical is a dying thing, but I had to have it! So yeh, hopefully you’ll be hearing a lot more of me.

You received support through the PRS Foundation’s Women Make Music fund – how has that helped?

That’s what I’ve used to get these EP off the ground and out there. I’m using pretty much all of it to go towards the PR campaign. Last year I played Glastonbury and was just getting my music out there. I always get great feedback from live shows but now I need to get my music heard by more people. Anyone can create music nowadays but it’s vital to have a good campaign too. PRS Foundation funding is helping me create a brand for myself.

How hard is it to do all that extra stuff as a DIY artist?

I doesn’t really come naturally but because I love music so much I know it has to come with it. Finding out what I have to do has switched me on to help other artists who maybe didn’t know about applying to the PRS Foundation for help. I’m always looking out for other artists by figuring out stuff myself.

How healthy is grime and UK hip-hop at the moment?

What about the rest of the UK?

It’s doing ok but I think it could do better – especially in Birmingham. I feel we could do with an infrastructure to help artists but like I said, it’s all about small steps so I hope it will develop more and more.

Hopefully more shows, more music and just me being me. There’s nothing more I want to give to people than my own creative experience.

The Get Rated Award is sponsored by Urban Development, an organisation which helps develop young creative and industry talent, especially focussed on Black, Asian and Minority Ethnic (BAME) and underprivileged young people. For more info, see http://www.urbandevelopment.co.uk.
Features
Back to top