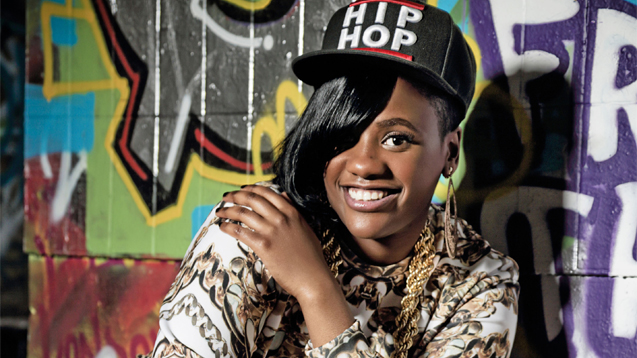 Grime and hip hop favourite Lady Lykez on why being yourself is the key to greatness for British artists...

Grime and hip hop artist Lady Lykez is gearing up to dazzle 2016 with a string of releases and live dates.

Taking her prompts from the likes of Dizzee Rascal and Ms Dynamite, her Ladyness first crashlanded into consciences back with YouTube smash I Luv My Butt a couple of years back, an up-front clash of UK grime and hip hop styles.

Over a string of well received releases, Psycho, Chat 2 Your Man and Nobody Can, she’s built up quite the following, beefed up by hectic slots at Glastonbury and as an opener for Method Man. Lykez is now prepping to lay waste to the year with new music and live outings including heading out on tour with grime legend Lethal Bizzle. In our new interview, we find an artist who believes that being yourself is the key to musical success…

I started doing music because my older cousin used to MC back in the old school garage days. I used to go round to their house and all the boys would be in the room rapping. I loved it, then started to think, I want to do this. Eventually I started off with learning my cousin’s lyrics and how to spit it. Then I was like ‘I want to write my own’. So from there, I started writing and getting really into it, going to different youth clubs and ‘clashing’. I used to walk up to different guys in the street and be like ‘you what – can you spit? Let’s clash’. I used to love competition. Guys used to think ‘this girl is crazy’ - I was only like 13/14 at this point.

Was it a natural thing for you to get into music?

Yeah definitely man. I always loved music. My family was into it, I used to play drums, went to choir, used to sing in church. So I was always into it but then rapping became my passion. I wanted to do it full time.

Who did you look to for inspiration when you were starting?

I used to love all the American rappers - like Eve, Eminem, Missy, then Dizzee [Rascal] when he came out. Back in the day a lot of people used to listen to American hip hop - but when Dizzee came out, you could actually be British, you could be yourself. You didn’t need to have an American accent! When Dizzee came out, then Ms Dynamite, I was like 'this is sick'. I can be myself and rap.

What was your big break as an artist?

My track I Luv My Butt did really well. It got over half a million YouTube views and that was more international as well. It was big in US - people over there were viewing and commenting so that was really good. Then I dropped Nobody Can at the beginning of last year, a more controversial track. That really put me on the map.

I’ve been writing for ages, writing loads of new singles. I want to release as many tracks as possible over the year so I’m preparing to drop an EP and mixtape.

So it’s going to be an exciting year?

It’s gonna be wicked. I can’t wait. I’m going on tour with Lethal Bizzle and there’s so much I want to achieve. I’m setting the groundwork now, getting ready for 2016.

Do you have a set formula when writing?

Sometimes inspiration will just pop into my head and I’ll record it on my phone. I co-produce as well so I’ll come up with the idea and I’ll collaborate with a producer. I’ll hear a beat and come up with something from that. But it’s always different. I’ve recently been coming up with a concept, then connecting with the producer, who can work around my idea.

Grime has enjoyed a massive 18 months - why do you think the spotlight is back on urban music?

There’s just more awareness of it. Plus for the American artists whether they like to admit or not, a lot of their music is now influenced by UK grime. Even like Kanye West’s All Day, that to me sounds like grime. It’s a grime beat. The styles are merging. It means there’s now more awareness of it so the sounds are merging and becoming on the same level.

How can new artists survive and make money from their music?

It’s mainly shows. Touring is where you can really make your money. A lot of artists do it independently now whereas before, labels would take a bit of everything. Now you can do it yourself. Do your own show, sell your own merch. Do you know what I mean? Shows, touring and merch is where the money is at. There are so many avenues now to do it by yourself and build up your own fan base. And once you’ve got a fan base what do you need?

Don’t get me wrong, labels can help, especially in terms of budget. Sometimes you want to do something but you’ve got to work around it because of budget. It makes you think more creatively I guess. There are pros and cons.

How can you stand out?

In terms of the playing field between male and female artists, is the industry more level than it has been before?

Watch the video to Chat 2 Your Man below…