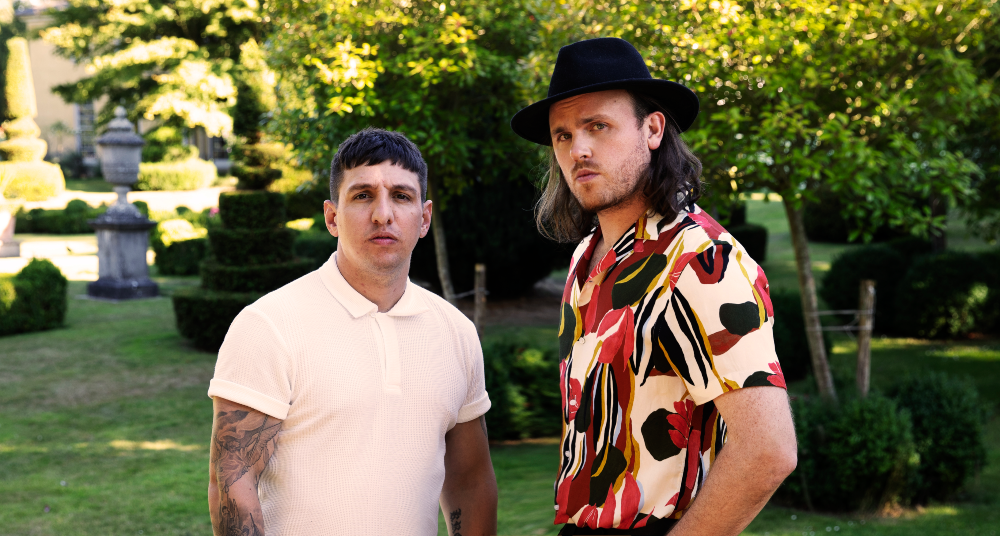 After the success of co-writing Joel Corry and MNEK’s hit Head & Heart, songwriting and production duo Kolidescopes – aka John Courtidis and Dan Dare – have been making some serious career moves. Having signed a worldwide publishing deal with Sony/ATV, the pair have been described as some of the ‘most multi-talented songwriters’ in the biz.

Head & Heart celebrated more than 10 weeks at No.1 in the UK, entered the US Hot 100 and reached high chart positions in Australia, Holland, Germany, Ireland, Belgium and Croatia.

Outside of their work as a duo, Dan has produced for the likes of Charli XCX, Wiley, Juelz Santana and Marina And The Diamonds, while Johnny has seen great success as part of the group Parachute Youth who reached platinum record sales.

Following Dan’s appearance on M Magazine partner The Songwriters Podcast with Louise Golbey, we asked both halves of Kolidescopes to give us the skinny on their burgeoning careers.

M: Hey guys, thanks for taking the time to chat to us! Where are you holed up during the current edition of UK lockdown? Are you together?

Dan: Thank you for having us. I'm in the UK. Trying to get that letter of exemption for Australia so we can crack on writing again.

Johnny: I'm back home, down under, for a while! Just in time for summer, I dodged that nasty winter in the UK.

M: How would you define Kolidescopes and what your place is within the music industry?

Dan: Kolidescopes is just fun, all the good vibes. Music for night and day.

Johnny: I think Kolidescopes is a representation of us. We have fun personalities, don’t take life too seriously and just enjoy it. As Danny said, nothing but good vibes!

Dan: A lot of tracks are written just to the piano chords then the track is built around it. It's dance music but ultimately, we want the songs to mean something.

M: How did the two of you meet and when did you decide you wanted to team-up?

Dan: We met at the Matrix in Chelsea, my publisher at the time was Chris Short. I had a studio there and Johnny had another project he was working on.

Johnny: Yep, met at the Matrix which was Danny's studio. Our publishers had randomly put us together in a session. One thing led to another and the rest is history.

Dan: After the second session in 2014, Kolidescopes was born, then we got drunk in the pub. We signed our first track Back to You to Universal but it was badly managed A&R-wise so died a death. We continued to work and signed a small indie deal with Kieron Donoghue who worked wonders for us!

M: You’re the duo behind MNEK and Joel Corry’s huge 2020 No.1 single Head and Heart. Can you talk us through the writing process?

Dan: Johnny had the hook idea down already and a basic beat, for me it was just about tying that catchy hook into a song where the ‘bum bum's’ made sense, the next day we were travelling to Leeds, so we parked the idea and went there to finish it with Rob Harvey.

Johnny: I started humming a vocal hook (‘bum bum bum’) in the bathroom ha-ha. I rushed back, recorded it with some piano and a beat. The next day Dan came over and listened and said, 'Yeah we’ve got to finish this.'

Dan: We got to Leeds, Rob was into it straight away, we tried a load of melodies for the verse but the one that worked the best was the melody of Johnny's hook, so we just used that. Wrote the words for the verse and the song was finished in a couple hours. We had the track, verse and hook done. Rob then liaised with Joel and Next Habit, who then passed it onto MNEK and Leo Kaylan who wrote the pre-chorus. Then the song was finished. So, it was quite a finishing process but 85 percent of the writing was done in Leeds at Rob’s on that day. You can watch a of that moment here.

M: Dan, when you appeared on the most recent episode of The Songwriters Podcast, hosted by Louise Golbey who I understand you have also written with. You chose Head and Heart as the song that best introduces you. How much has that track impacted your career?

Dan: Hugely, nothing has changed in terms of how I write or do things. People just believe our ideas now because we have had a hit. We have been writing songs like this for years, it's just about right time, right place!

M: You also mentioned that you knew it was a special song right from the off. How often does that happen with your songwriting? Did you always have MNEK in mind for the vocals?

Dan: We knew it was a special topline, me, Johnny and Rob shook on that day and said this is a monster. It's number one. Any songwriter will tell you they get gassed about songs at the end of the day then to listen to it the next day and be like 'meh'.

Johnny: This song was special from the start. Dan, Rob and I we're all dancing in the studio and then pressed pause and looked at each other. We knew then, and as Dan said, we shook on it that it would be a big one! We also drove around Leeds for an hour with it on repeat.

Dan: Credit to Joel, he saw the vision of having MNEK on it. Originally it was Johnny singing it and it sounded amazing. Our label wanted to put it out as a Kolidescopes record but we thought it would be better placed for Joel to have a hit with.

M: Aside from the obvious, what have been your career highlights to date – either together or individually?

Johnny: I think in all our successes, it would have to be overcoming the hardships of 2020 as a team. Signing a major record deal, having a hit record and signing a publishing deal all in one year, I couldn't be prouder of Dan and I.

Dan: Agreed, I also think having a career for as long as we have is something to highlight. We have both been doing music for over 15 years, so it takes years to become an overnight success. We have both signed major record deals that fell on our face, got back up and carried on despite being homeless, jobless and without a pot to piss in!

M: When you signed with Sony/ATV at the tail end of last year, President David Ventura said it was evident that they have ‘the absolute ‘full set’ as writers, topliners, producers and singers’. How important do you think it is to be multi-faceted in that way?

Johnny: I think it's a very important asset to have in this industry. It gives you an understanding of the most important components in making music. You can contribute to every area creatively and if you master that craft, you put yourself in a great position to succeed.

Dan: Nowadays you have to be manager, label, PR, mixer, engineer etc - the old model has changed with the times. As tech advances so do people’s skill sets and I think it is important to do all these things, but not overdo it and lose sight of the art.

M: Can you give us your golden rules for writing a topline?

Dan: Every song needs that one 'thing' you identify with, it just depends on whether that one thing is good enough. The weirdest words sing so well sometimes so it's just about exploring that first then maybe changing it to a word that makes sense. Most songs start as mumbles or baby language.

Johnny: Always be patient. Listen to those around you and soak it all in, take ego out of the equation. Once you find a formula that works, keep using it.

M: Is there anyone you’re listening to at the moment that you think M readers should be aware of?

M: What does 2021 look like for you, pandemic permitting?

Johnny: Hopefully we can be back in the same country ASAP and start writing! Only time will tell so, for now, we're doing the long-distance relationship.

Dan: Hopefully I can get to Australia! We have All for You with Gavin James that dropped on 19 February, so we are focusing a lot of energy into that and have laid out our release plan for the year with our record label. Most of the songs we wrote last year will drop this year.

Stay up to date with Kolidescopes.