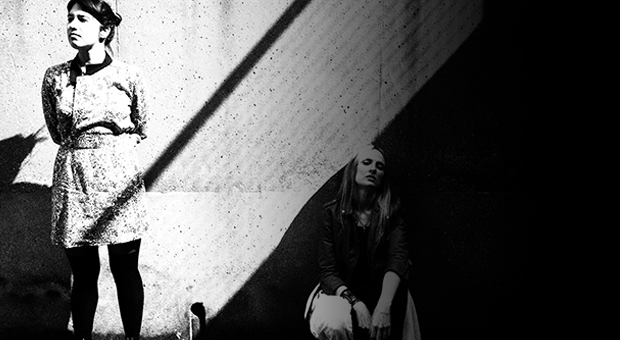 'The wonders of digital technology - you can jam over the airwaves!' Kite Base discuss writing songs over the ether...

Two years of tinkering has seen the pair reinvent the austere post-punk template for the 21st century and develop ingenious ways of celebrating the melodic and rhythmic aspects of bass guitar.

With a geeky appreciation for the building blocks of techno, hardcore, indie and synth-pop, they’re melding their simple shapes into unexpected sonic angles.

Fresh out of the blocks this autumn, Ayse and Kendra have only released two tracks – Miracle Waves and Dadum.

Both are bold stencils, with the space between the outlines allowing their vocals to grow and breathe over time.

We caught up with them at a wee café behind Electrowerks, London, to learn more about what else is in the works and how they create their songs over the ether...

When did you two meet?
Kendra: Maybe three or four years ago. We've been tinkering with various bits and got the idea for Kite Base about a year and a half ago.
Ayse: I always knew that I wanted to make music with Kendra because we had so many interesting things that we wanted to try out, such as going on adventures and doing field recordings in strange locations. I thought I'd found a great person to experiment with and we’ve slowly built up a collection of songs.

Has your sound grown organically or did you have a plan?
Kendra: I've always loved dance music. Ayse has always loved electronics. So we thought, ‘Well, how the hell do we do this?’ I'd never programmed before. It was two girls, two basses, GarageBand and an iPad to start with (laughter). So, yep, it happened organically, but yes, we had an idea of what we wanted to sound like in a way, an aesthetic idea behind it.
Ayse: I think because we both love bass so much it felt like we should do what we do best rather than me trying badly to play guitar (laughter). It felt like it made sense.

How often do you get together to do music?
Ayse: I’ll be all over the place on tour, so we send things back and forth to each other.
Kendra: The wonders of digital technology - you can jam over the airwaves! That's how we wrote the first album. Then we finally came together to polish things off. It's a really interesting way to work.

You mention the dynamic of the two basses. What does that brings?
Kendra: I think bass combines the best of rhythm and melody really. Back in the day I started off on guitar and it never clicked quite as much. Sometimes when you’re in bands you can end up playing the root notes and sitting in the background a little bit. But we decided to put bass upfront (laughter). Let's have a whole plethora of pedals!

So you love a bass solo?
Kendra: Yes! Sometimes when we have a jam we end up a little bit Thin Lizzy, don't we? (laughter) Seriously though, there are certain techniques you can employ – call-and-response and harmony being two of them. Although I do like Thin Lizzy, maybe that's not very Kite Base (laughter).

Who brings the electronic elements?
Kendra: The hardware ended up being my domain. Ayse will also put tracks into any digital audio workspace and send an idea to me. Then I'll reinterpret that or translate it across to a drum machine.

Is the sequencing side just a means to an end or do you relish the process?
Kendra: For composition I find it an absolute godsend. It is really handy for jotting ideas down quickly that we can then reinterpret more fully. I'm not a particular fan of finishing things off digitally. I like touching stuff. It just feels a lot more tangible to me. Ayse, you do a lot of composition with Logic and other stuff don’t you?
Ayse: Yes. I like the process of learning how to use it. At the start, you’re just learning and are using the equipment the best you can. The more you use it and you learn, I feel like you start losing something.

So limitations are what fire you up?
Kendra: For me, that really hits the nail on the head. It's almost like you've got too much scope sometimes. I think, personally, you can be more creative with less. I'd rather strip it down and then build on it.

How is this project different to other stuff you've done in the past?
Kendra: Well, one of the other groups I'm in is female barber shop type singing group. It's all fifties covers and four-part harmonies! It’s a whole different shebang as you play gigs at charity luncheons and you get paid in mince pies and wine at Christmas.
Ayse: I've been in lots of bands prior to Savages, but currently it's Kite Base and Savages just due to time constraints. In Savages I just have to think about bass. It's been an interesting process for me coming from a band where the rhythm is so drum and bass-led. Me and Fay [Savages drummer] are so interconnected that it's very strange playing a Kite Base show with a drum machine.

It must feel a lot looser with a real drummer?
Ayse: Yes, and it makes you realise how much you move around when you've got another person physically playing, how much you can both move around because you can adapt to each other. With electronics, you've got to be in time with it. It's been quite an interesting challenge!

What do two basses bring?
Kendra: You have to be really conscious that if both of you are playing in the same register it is mud.
Ayse: Exactly.
Kendra: We like mud, don't we?
Ayse: Yes, we like mud (laughter).
Kendra: We like a nice, grumbly base, but there's a time and a place. I've got to be conscious if Ayse is in the treble area, maybe I'll be down low. There's a lot to think about, composition wise, before we even get off the starting block really. You have to be quite disciplined in the way you approach it. If you bring a synth in as well, you bring it in more rhythmically than in a melodious way, because otherwise you just end up with this, I don't know, ‘dial-gaze’ not shoegaze (laughter).
Ayse: It's funny because I've found myself researching the science behind music and being more interested in sound engineering, how do you get two bassists to come through, like what Kendra has been saying.
Kendra: Pan hard left, pan hard right!
Ayse: Yes (laughter).

You’re both working on other stuff too. Do you need to put yourself in a particular headspace and go, ‘Right, Kite Base’?
Kendra: When it's something that you want to do you inevitably do it anyway. I think I would have been probably doodling away until I found other people to doodle with if you hadn't approached me to do it. The same is true for Ayse. Again, it's the wonders of digital. If you get a line or a riff or something you can just ping it over to someone else. That's when working digitally really comes into being for me rather than a finishing-the-product type of thing.

How do your songs start life?
Kendra: There's not really a method. One thing I've learnt is that I can’t do it unless I have a backlog of ideas to start with. If I go out and I get an idea in my head I literally have to run to a corner and jot my idea down or use some kind of recording thing on my iPhone or GarageBand, whatever.

You like to use found sounds in your music. What's your favourite sound ever?
Ayse: Ooh. I don't know – there are so many different sounds! For example, I love the sound of rain pattering on glass because I used to live with my parents and I had an attic room. Growing up, I always really loved the sound of rain. I do have a passion for vintage cars and I love camper vans, Volkswagen camper vans. I love the tone of the engine. It's like a purr.
Kendra: My best friend is a sound engineer and I used to be in a band with him many, many years ago. I can't remember what service station this is and what particular bridge, but there's some sort of a flyover somewhere up north. He introduced me to this bridge and if you stand in the middle of it where the motorway goes underneath it makes this incredible sound as the cars come underneath it. It's like a Moog.

Do you go out gathering sounds a lot then?
Ayse: Yes. Obviously because I'm on tour quite a lot there'll be lots of great sounds. For example, quite recently I was in New York. There's something really aggressive about the fire engines - they sounds like some crazy wildcat.
Kendra: Sometimes these sounds can be great catalysts. Or they add a mood you can play to. I think the next lot of stuff we're going to do will be a lot more sample based.

When can we expect the album?
Ayse: We're still working on what to do with it, to be honest. I'm guessing we'll know next year. It's ready to go.
Kendra: Yes. We're playing it, we're touring it (laughter).

http://kiteba.se/
Features
Back to top