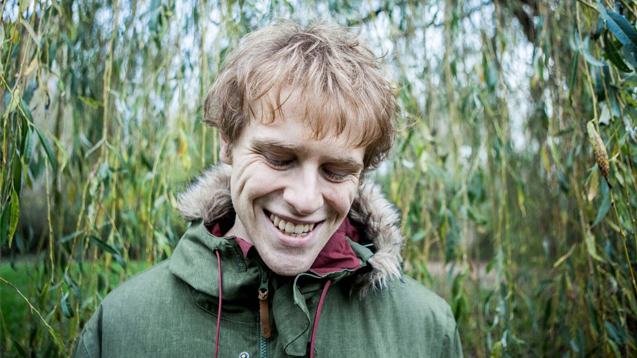 ‘As long as it wins the Grammy Award for Best Metal Performance, then I’ll be satisfied’ - we shoot the breeze with the brilliant new musical talent that is Kiran Leonard…

While the music industry falls over itself to congratulate the bland, the real talent in 2016 seems to be gathering apace by remaining resolutely on the outside.

So it is with Kiran Leonard, a 20 year-old musician from Oldham, Greater Manchester. Only the more discerning areas of the music press have blessed his genius but it’s one that will be increasingly difficult to avoid as the year goes on.

His second album, Grapefruit, is due out this Friday (25 March) via Moshi Moshi and is the tip of a vast iceberg of musical talent, taking in prog, psychedelia and off beat pop. The much talked of centre piece is Pink Fruit, a 16 minute epic involving a squid and some serious sexy business. Come take a trip with us and one of the UK’s most innovative new songwriters in our interview…

I am the fourth of five children raised by creative and wonderful parents in a house full of musical instruments. It helps that I turned up later on ‘cause it meant I could swipe equipment my dad and my older brothers had already amassed.

What made you want to start writing your own songs?

Just the instinctive desire. I don’t remember an eureka moment. You just take an instrument and figure out how to make a sound out of it and it feels reet good, no?

How has being from Oldham influenced your songwriting?

Pretentiousness is strongly discouraged in Oldham, and I mean that in a very positive sense: if you’re going to say something all arty-farty, you have to substantiate it. As a result, I think it’s a town full of interesting, bright people who don’t chat breeze. Also, God bless the Oldham Music Centre (particularly Simon Prince, who runs [at least this was the case when I was there] the only youth contemporary music ensemble in the country, as well as the jazz group). And shout out to Jim McMahon MP, who I admire greatly.

Your debut album Bowler Hat Soup featured more than 22 instruments including a radiator? How do you approach your songwriting? With so many creative channels available it must be tough to work out which one to go down?

I’d say it's mixture of instinct and careful planning. But I know that doesn’t make any sense. (Radiators are dead good by the way - you just strike them with a stick and they have a great resonant metallic sound).

Grapefruit is your forthcoming LP - could you explain about the creative process? What does the record mean to you? And what are your hopes for the album?

I wrote and recorded Grapefruit simultaneously, over the course of a couple of years. Half of it’s about gender and upbringing and communication, and half of it’s about nothing at all (nb: that means you can do the work for me and decide for yourself). Re. hopes… to be honest, as long as it wins the Grammy Award for Best Metal Performance, then I’ll be satisfied.

Pink Fruit is the much talked of 16 minute centre piece to the record - what’s the song about? And was length an important factor in it? In a world of ever increasing velocity, where attention spans are short, it’s quite a daring move…

I’ll tell you what it’s not about: a woman who shags a squid. Everyone and their uncle is saying that it’s about a woman who shags a squid and it’s absolutely not. It’s about a woman who is about to shag a human man and then he pulls up her dress and there’s a squid sat in her belly. That’s a major distinction! And I think it would be a bit dull if I just upped and told you exactly what the image of the abdomened squid signifies.

I mean, really, Pink Fruit is just like listening to November Rain nearly twice. And I think that if you consider it from that angle, the whole issue of it being ‘a bit long’ fades into insignificance.

Is it important to challenge your listeners?

You’ve linked up with Moshi Moshi for this new LP - how did this come about? And what does this mean for an artist such as yourself?

I met Stephen [who runs the label] when he came to a radio session I did for Marc Riley; he was driving from Land’s End to John O’Groats with a big box of French language learning cassettes and he happened to be passing through Salford the evening I was in MediaCity. A nice man. Polite. Thorough.

What’s been the best thing that’s happened since you started your ‘career’ in the music industry?

Have you got a favourite sound?

Wind in a big tree, because it sounds like the ocean. That, or a perfectly clean ninth fret harmonic on an electric guitar (in any tuning), with the sustained pitch bent down by pushing the instrument’s neck. Don’t do it with a whammy bar, you cheats. It sounds ridiculous.

What’s the most enjoyable aspect to making music?

Probably nailing a complicated section of music in a group. It’s definitely not recording (a necessary evil if there ever was one).

Have you any tips/advice for new artists?

Relinquish all snobbery. Engage with other forms of art, and other things: the news, history, mathematics, whatever the hell you want. Think lots about things.

Also, sorry to flog a dead cliché but people overlook the “just be yourself” maxim; this, to be fair, is mostly cause it’s a super lazy, tedious, non-piece of advice, roughly analogous to (ie. about as helpful as) “just do what you feel!”.

What you should do is think long and hard about what you see yourself as, and how certain works of art make you feel, and what you think about the world around you, things that happen in it to you and to others, be they wonderful or terrible. I know; very new age-y. But I promise that it’s true. Be thoughtful in what you do, above all. I guess that comes back to the paradox I said before, about things being instinctive and deeply considered at the same time. Trust me, in practise it makes sense!!!!

I’ll probably get fatter and balder and shitter. But before that, I’d like to get better. And maybe I’ll even get in better shape. And start using Demoxinil.

Visit Kiran's Facebook page to find out more on Grapefruit and forthcoming tour. Listen to Pink Fruit below.