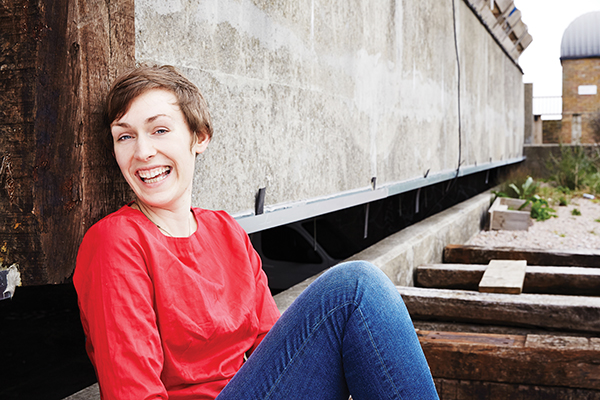 Kate Whitley is a classical composer who’s grasped the DIY ethic with both hands. Here, she gives us the inside track on Multi-Storey, her innovative concert concept, and explains what life's like as a classical music outsider.

Not content with writing and performing her own work – and that of others – she co-founded the innovative Multi-Storey concert concept just months after graduating from university.

The basic premise of the initiative is to bring classical music to a wider audience, lifting it out of stuffy concert hall into local boozers, neighbourhood schools and disused city spaces.

To this end, Multi-Storey calls a defunct car park in Peckham home, launching with an impressive performance of Stravinsky’s The Rite of Spring in front of 1,500 people back in 2011.

Together with conductor Christopher Stark, she’s grown the idea into a full scale community outreach project.

Multi-Story now performs in the car park every summer, takes the orchestra around local schools in a tour bus and runs community choir projects.

Meanwhile Kate’s own pieces Wishes Lies and Dreams (2013) and Alive (2014) have been performed by choirs of more than 200 people from local schools and community choirs.

We spent some time with Kate for our recent feature Free Range, which explores the opportunities available to classical composers willing to go DIY.

Here’s what she had to say…

What sort of music did you grow up with and how has it influenced your own music, if at all?
I didn’t listen to classical music until I was quite a lot older. I listened to pop and electronic music when I was younger. I’ve played the piano since I was quite small, but it had always been a separate thing from the music I’d listen to for fun. I enjoyed practising and getting good at it, but it wasn’t the sort of music my friends were into. But music is such a social thing when you’re growing up and it defines who you are. I just didn’t fit in with classical music at all.

I got good on piano and went on a couple of music courses when I was about 15 or 16. That was the first time that I met people my age who actually liked classical music – and it was a bit of a shock. I started to realise that classical music was amazing and then found it odd that all the people I’d grown up with at school didn’t, so a lot of what I do know is about trying to reconcile those two things.

What was it like to step into the classical world at that age?
It was really weird. Classical music was something that I did at home on my own. It was very odd to suddenly enter a world where young people listened to it and had string quartets at school, and played chamber music in their spare time – it was so alien to me.

It wasn’t scary but it seemed very odd. Classical music was totally unaccepted in my social circle at school and I started to wonder why. It got me into working on projects that would bridge that gap.

What has that reconciliation process been like? What have the reactions been?
Mixed! We put had something really tricky on just the other week and it’s good to have those experiences because sometimes you forget that it’s not just an easy ride. So many of our events have gone so well, and there is so much great stuff going on in London, making it all seem quite normal. You can forget that it really isn’t normal and it can all go wrong.

We’ve had events in pubs where people haven’t paid any attention and the players have got really frustrated with it. There are loads of times when you feel the clash as things don’t go well, but there are so many times when it’s all gone really well. It’s mixed.

Why do you think there are those barriers? Where do they come from?
I think it’s to do with the way we’re supposed to listen to classical music in concert halls and the way we actually listen to it. The concert hall listening situation is so extreme and there’s no in between. People who aren’t used to listening to classical music have no idea how it is to sit and listen quietly, and concentrate – it’s an alien thing. I do a lot of education outreach and the thing we’re really working on with kids is to teach them that music, in itself, is a skill. We always hit the same issue.

How do you address it?
We take the same orchestra that plays in the car park to perform in schools around Peckham. People always ask why we don’t get the children to sing along or write a little piece themselves and participate in some way. But actually, I think it’s really important that they don’t because they’re never taught to listen. Classical music is based on people listening and that’s what’s gone. So essentially, we try to find ways to make people listen.

How has your Multi-Storey project evolved since 2011?
We’ve had really good crowds and the reception has been really good. We did our first full season this summer. Normally we just do one event a year so it was cool to do a whole load of them and still get loads of people to come along. We’ve struggled a bit with local audiences so that’s been our focus. But the education side is trying to address that. It’s all helping to change things, but it is an ongoing struggle.

How difficult has it been to get these initiatives off the ground?
It’s been incredibly difficult. We had an event recently that wasn’t set up for classical performance – or any performance actually! There we so many issues. The lights weren’t bright enough for the musicians to read their music but the venue wanted the lights to look dingy and cool. So two minutes before the performance we were putting up more lights. We’ll always be grappling with that.

I think funding is the main struggle – we’re always worried about getting enough money to fund the events. I’m looking forward to the day when it doesn’t feel quite so DIY, but it is fun!

How can young composers get their first foot on the ladder?
I does feel like there are a lot of people at the moment who are making opportunities for themselves rather than waiting for commissions. It’s becoming more and more competitive so people are forced to be entrepreneurial. That has drawbacks as well. There are a lot of people who might be really good composers but don’t have the right skillset to get their own projects off the ground or participate in the sort of things we do. It’s not a solution for everyone, but taking a DIY approach has completely transformed what I’m involved in. It’s a hell of a lot of work, and a lot of time is spent on stuff that isn’t actually composing.

How is this DIY ethos shaping the music?
It’s hard to say – I don’t think there’s a general trend but the individual journeys that people take are shaped by it. My music has definitely been influenced by having to write for unusual contexts, rather than the traditional ones.

http://katewhitley.net/
Features
Back to top